Mining & metals in a low-carbon world

The mining & metals sector is gaining renewed global macro-economic prominence. Minerals and metals, whether produced or recycled, will be critical to the success of the world's energy transition toward a low-carbon future.

The resilience of the sector and of commodity prices through the COVID-19 pandemic, coupled with growing investor and consumer excitement about energy transition materials, has lured generalist investors toward the sector for the first time in years. This contrasts with environmental, social and governance (ESG) concerns and lackluster returns that were previously discouraging these investors.

The ESG agenda has undoubtedly been a major driver of change in recent times, and the bar of expectations is continually being raised by investors, governments, communities, consumers and other stakeholders.

There is tremendous opportunity for industry players to embed an ESG and low-carbon culture, capturing both risks and opportunities, into their corporate strategies in order to build stakeholder trust, focus on ESG and low-carbon-compatible business lines, and generate truly sustainable growth.

The World Bank estimates that the production of minerals such as lithium, graphite and cobalt would rise by almost 500% by 2050 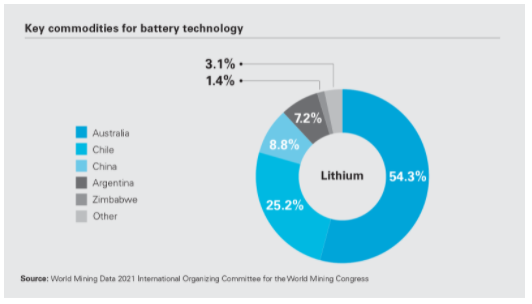 The World Bank has estimated that the production of minerals such as lithium, graphite and cobalt is set to rise by almost 500 percent by 2050. Minerals and metals will be more in demand than ever in a low-carbon world.

However, the nature of the work conducted in the mining & metals sector means that it has traditionally been highly exposed to bribery and corruption risks. It is important to remember that these risks will remain and, at points, increase, as the energy revolution takes place.

As businesses and investors adapt and take advantage of the opportunities presented by the transition, they should remain mindful of the existing and emerging bribery and corruption risks so that they can create systems and controls to effectively manage them. 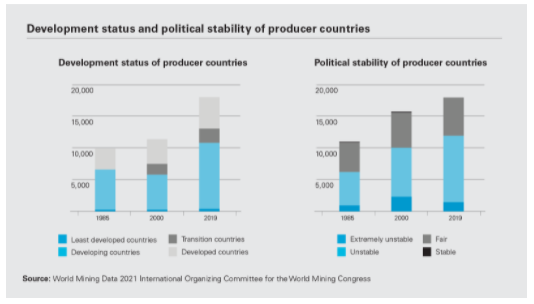 Minerals including lithium, graphite and cobalt are critical to the manufacture of renewable energy technologies, such as rechargeable batteries used in electric vehicles and wind turbines. They are also only found in a small number of countries across the globe, many of which are deemed to be very high-risk from a bribery and corruption perspective.

The Democratic Republic of the Congo (DRC) currently produces roughly 60 percent of the world's cobalt, with Russia also ranking as a key producer of the metal. Exploration of lithium reserves in South America has continued to climb, with Chile currently the world's number-two producer of lithium. As of 2020, China is the world's largest producer of graphite.

According to Transparency International's Corruption Perceptions Index (CPI), which scores 180 countries and territories by their perceived levels of public sector corruption according to experts and business people, China has a score of 42/100 and Russia a score of 30/100. Lower scores indicate higher levels of corruption.

Guinea, another important producer of key minerals such as graphite, has a score of 28/100 and the DRC has a score of 18/100. The index shows that, in general, many of the key producer countries currently present big bribery and corruption challenges to businesses and investors.

A key reason for low scoring on the CPI is the well-known challenge of interacting with government officials in certain countries. Interactions with government officials are higher risk because of the very low test for bribery under international bribery laws, including the UK Bribery Act 2010—which does not require corrupt intent for an offense of bribing a public official to be leveled.

These risks are acute in the mining & metals sector because of the need to work closely with government officials throughout the development and operation of projects. Governments act as gatekeepers with the power to approve projects and allocate rights to foreign companies to extract and manage these natural resources.

As the above graphics show, a significant proportion of producer countries are deemed developing countries, and a significant portion are also deemed unstable or extremely unstable.

When working in such countries, businesses are likely to struggle with longer bureaucratic processes as well as difficulties with managing relationships with government officials and departments against a backdrop of fragile political conditions and differing expectations around conducting business.

The challenge is finding the fine balance between maintaining good working relationships with government officials and departments, and avoiding any conduct that could be perceived as falling foul of some very low thresholds under international bribery and corruption laws.

Pre-deal due diligence on an intended target is a must in any investment opportunity in order to fully scope risks, including financial crime risks

Facilitation payments, sometimes known as "grease payments," are payments made to government officials to expedite a routine action. Such payments are illegal in an ever-growing number of jurisdictions, but still remain a common, and expected, part of doing business in some countries where low-level government officials receive low salaries.

They are prevalent when bureaucratic procedures cause delays to government and administrative actions, and are also often requested in connection with the transport of goods, for example at ports in order to facilitate the timely clearance through customs and avoid long delays.

The COVID-19 pandemic and successive lockdowns are likely to have exacerbated delays in government processes as well as the movement of goods, and therefore heightened the risk of facilitation payments being made. These pressures are likely to be intensified by the increased demand for minerals, and the incentives for companies to be the first to capitalize on opportunities.

Robust procedures can be put in place to ensure that the pressures and opportunities presented by the transition to clean energy do not result in corrupt payments being incentivized to "get the job done quickly."

Engaging third parties gives rise to these risks, as businesses can be held criminally liable under international bribery laws for bribes paid by those acting for them or on their behalf. These risks are increased when dealing in higher-risk regions, such as those that are likely to be key to mineral production for green technologies.

As new entrants come into the market as part of the energy transition, businesses should be mindful of the risks presented by their agents, contractors and representatives, ensure they are suitable and that robust controls are in place to monitor and manage their conduct.

Third-party risks can appear in the logistics chain, which will often involve multiple third parties. Risks will be higher where multiple borders are crossed, or multiple modes of transport are used to move a product from pit to port. Logistics chains are particularly vulnerable to facilitation payments.

A high degree of reliance on third-party agents to interact with governments, whether in relation to the logistics chain or otherwise, where the interests and the extent of the role of those agents is unclear, is also likely to give rise to bribery risk.

There are also risks associated with on-boarding new partners where old partners are no longer able to fulfill a particular role.

of the world's cobalt is currently produced by The Democratic Republic of the Congo (DRC).

Due diligence on acquisitions

The opportunities presented for the mining & metals sector by the transition to clean energy are likely to result in an increased interest in investment and acquisition.

Given the high risks from a financial crime perspective, it is important that pre-deal due diligence is carried out on an intended target or investment opportunity in order to fully scope out the types and levels of risk presented, as well as highlight any issues capable of being identified at the due diligence stage.

This extends further than checking whether an anti-bribery and corruption policy exists; it is important to know how typical financial crime risks are managed and reach a view on whether those risk-management tools are likely to have been effective. This enables the potential investor to be fully informed of the risks presented by the transaction—which may become their risks before long—and of the likelihood of issues cropping up post-deal.

Bribery and corruption risks in the mining & metals sector will not vanish with the transition to clean energy. However, there are many things that can be done to manage these risks so that businesses can operate within the parameters set by international bribery and corruption laws.

With careful planning, strong systems and controls, and dedicated oversight, bribery and corruption risks can be mitigated.

Businesses should think about creating specific policies and procedures around dealings with government officials and how to react to particular scenarios. These should be tailored to the country in question, given that each will have its own systems and therefore present unique challenges.

Targeted additional training to members of staff that are most likely to be placed in situations where actions they take could fall foul of the very low tests under international bribery and corruption laws is also advisable.

Businesses should undertake careful due diligence into third parties before they are engaged, followed by continued monitoring of the work they are performing and scrutiny of invoices before payment. All of this should be conducted by employees with the skills and experience to spot potential bribery and corruption issues.

Enhanced cooperation between agencies at an international level has helped to facilitate the enforcement of anti-corruption laws around the world, with a significant proportion of enforcement actions in bribery and corruption occurring in the mining industry.

In addition, it is no longer one or two of the usual suspects seeking to prosecute bribery; an increasing number of enforcement agencies around the world are looking to take action against perceived wrongdoers.

As we race toward a greener future, it is important to bear in mind that we have not left bribery and corruption risks behind. They are as relevant as ever, and the threat of enforcement is very real.

Businesses operating in the sector should therefore ensure they spend time focusing on considered and careful bribery risk assessment and management, creating the systems and controls that can effectively mitigate risks, at the same time as allowing operations to run smoothly.