Peaks, valleys and plateaus: The US M&A landscape in 2017

In the past year, the US M&A landscape has been difficult to map. The total value of deals targeting US firms dropped 14.3 percent year-on-year to US$1.3 trillion, while volume edged ahead by 0.4 percent. Yet despite the decline in value, 2017 activity continued at a high level and outpaced all other post-crisis years from 2008 to 2013.

There were fewer large-cap deals from overseas bidders, and heightened regulatory scrutiny contributed to a 31 percent drop in year-on-year inbound value. However, while headline figures are down, US bidders have become more confident about acquiring abroad. The value of outbound M&A transactions increased 20 percent year-on-year to reach US$340.8 billion.

"We have had a great year," says John Reiss, Global Head of M&A at White & Case. "In particular, the M&A market had an uptick in November and December, which bodes well for 2018. Across all sectors, there continues to be a desire for scale, a desire to broaden brands and a desire to compete with new entrants disrupting industries. And M&A remains one of the best ways to achieve those aims."

Greg Pryor, Head of Americas M&A at White & Case, agrees: "In 2017 we saw high levels of activity, demonstrating the continuing importance of strategic M&A for both companies and investors alike. The fundamentals for M&A remain in place, and we expect a similarly strong 2018".

When it comes to the top end of the market, US dealmakers are choosing to invest at home. Eight out of the top-ten US deals of the year were domestic. The Walt Disney Company's headline-grabbing US$68.4 billion deal for certain assets of 21st Century Fox marked the highest valued US transaction of the year. The massive Disney/Fox deal followed closely on the heels of CVS Health Corporation's acquisition of Aetna, Inc. These two megadeals, together with Broadcom's proposal to acquire Qualcomm in a huge US$130 billion transaction, highlighted this trend and suggest that 2018 domestic dealmaking could be quite active. Despite this dominance, total domestic deal value did not beat 2016's figure. A total of 4,324 deals worth US$965.4 billion marked a 7.1 percent decrease in value compared to 2016, with 0.6 percent fewer deals. 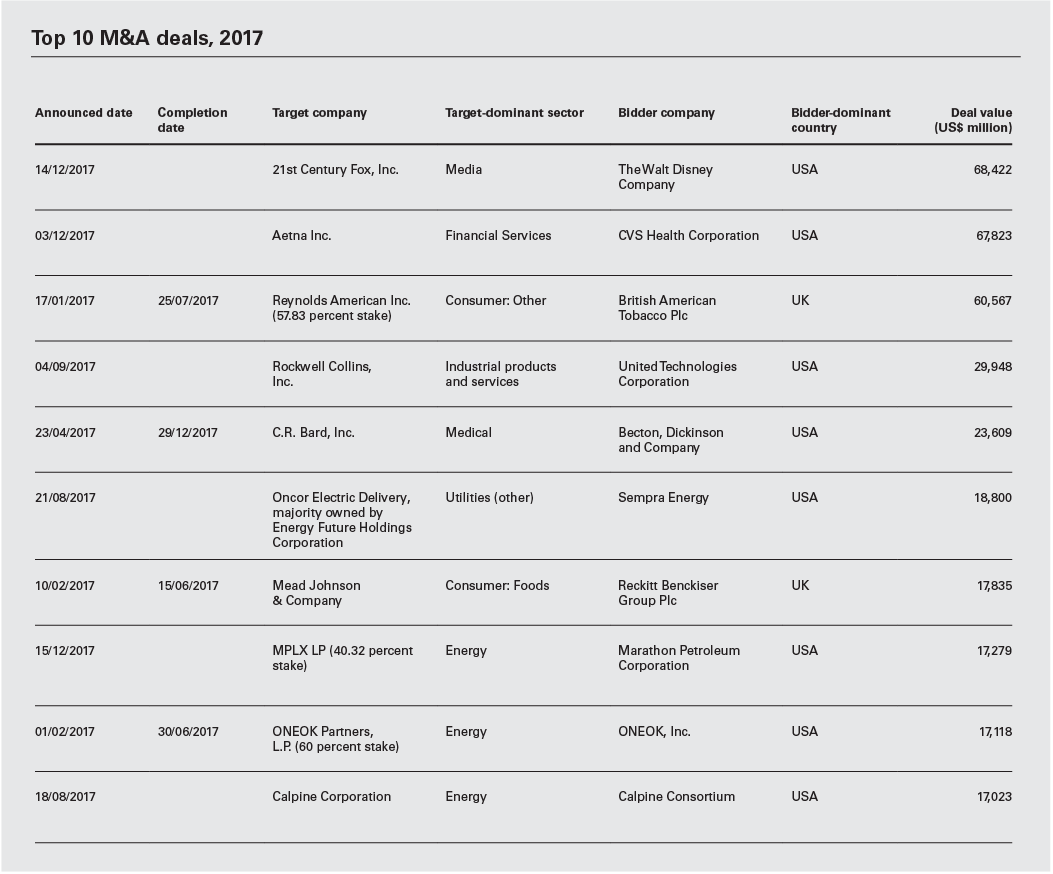 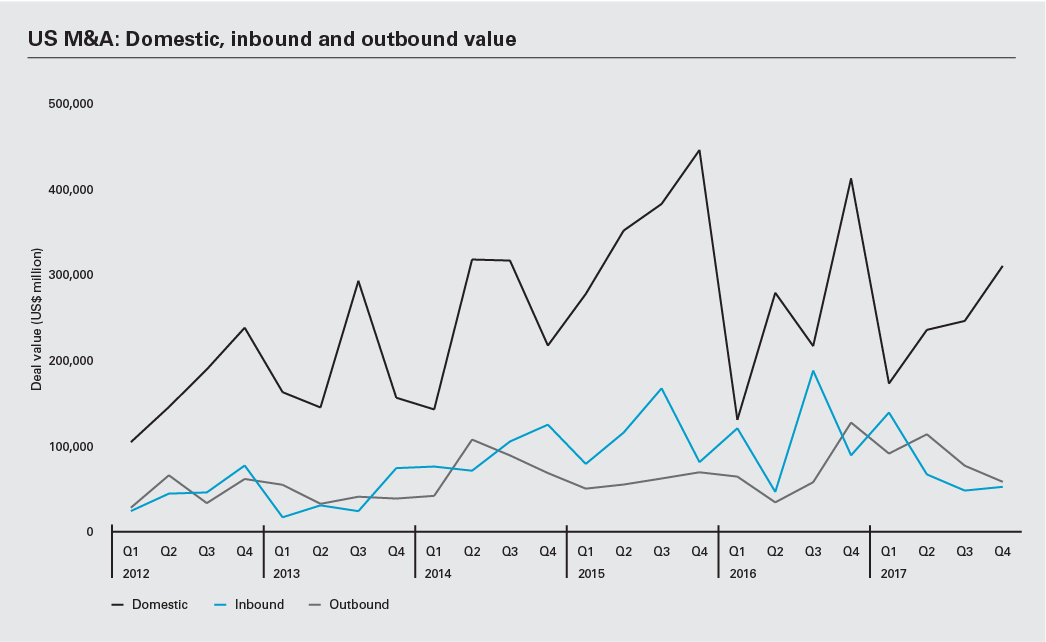 US dealmakers' confidence in overseas investment was demonstrated in record-breaking deal figures. There was a total of US$340.8 billion spent across 1,330 deals involving foreign targets, marking a 20 percent value increase compared to 2016.

This increase was underpinned by positive economic indicators both at home and overseas. In the third quarter of 2017, GDP grew by 3.3 percent, according to the Commerce Department. This was the fastest rise since Q3 2014. A record-breaking stock market continues to support buyer confidence and attractive valuations for vendors. Overseas, the eurozone economy surpassed expectations in 2017, seeing a real GDP growth of 2.2 percent.

Record levels of dry powder helped to drive valuations higher and lift buyout activity to a post-crisis high in 2017, both by volume and value. According to research group Preqin, dry powder levels exceeded US$1 trillion in 2017, up from US$838 billion in 2016.

This prompted intense competition for the most-prized assets, particularly because PE firms had the funds to compete with their corporate rivals. There were 1,176 buyouts worth US$190.8 billion in 2017, an increase of 12.3 percent by value and 10.4 percent by volume compared to 2016.

The optimism surrounding the impact of Trump's business-friendly tax reforms and the confidence gained from stock market highs are counterbalanced by concern about the impact of antitrust and CFIUS interventions on big-ticket transactions. "One of the big uncertainties right now is where the government is going in terms of antitrust enforcement," says Reiss.

These factors acted as deterrents for inbound M&A activity during 2017. Deal value from overseas bidders fell 31 percent year-on-year to US$306.9 billion, as foreign buyers adopted a more cautious approach to US deals following the blocking of some high-profile transactions.

One such lapsed deal was the US$1.2 billion bid for Lattice Semiconductor Corporation by China-backed Canyon Bridge Capital Partners, which failed to obtain clearance from CFIUS. Chinese smartphone manufacturer TCL Industries' bid for the mobile hotspot business of Inseego Corporation and the proposed sale of ExL Petroleum Management have also been called off due to CFIUS concerns, giving overseas investors reason for pause. However, the number of inbound mid-market deals into the US actually increased by 2.8 percent.

The interventions of CFIUS and the Trump Administration's protectionist rhetoric appear to have had a particular impact on Chinese inbound activity. Deal value from Chinese firms investing in US assets plummeted 81 percent from a record US$56.7 billion to US$10.7 billion year-on-year, while volume dropped by 15 percent. China was the third-largest inbound M&A investor into the US in 2016, but ranked only seventh during 2017.

"China has been an important player in US M&A in recent years, but multiple overlapping factors both in China and in the US have had an impact," Reiss says. "There are limitations on Chinese outbound activity because of regulation and overleverage in Chinese financial institutions and large corporates. On the US side, regulation by Trump and CFIUS further limit activity."

Despite challenges to M&A at a macro level, strong strategic rationales for transactions have meant that high-profile deals continue to close. Within the consumer space, M&A has enabled companies to build scale, reduce costs through synergies and strengthen positions in new markets. The trend was demonstrated through high-profile deals such as British American Tobacco's US$60.6 billion purchase of a majority stake in Reynolds American and Reckitt Benckiser's US$17.8 billion takeover of Mead Johnson & Company. A total of US$167.8 billion spent on US consumer assets was up 139 percent when compared to 2016's value.

The disruptive impact of technology across all sectors continues to spark deal activity. A flurry of deals made TMT the most targeted sector in terms of volume, with a total of 1,213 transactions, up 4.1 percent compared to 2016.

Competition from new market entrants is pushing some big companies to acquire established players in markets where they see opportunities to expand. Amazon's US$13.5 billion purchase of grocer Whole Foods, for example, allowed the tech company to expand into the adjacent sector of grocery retailing. Meanwhile, pharmacy chain CVS's US$67.8 billion acquisition of insurance firm Aetna is widely believed to be in reaction to Amazon's plans to move into the pharmacy market.

The US Federal Reserve raised interest rates by 0.25 percent in December, the third rate rise in 2017. With an estimated GDP growth of 2.5 percent in 2017 and 2018, this increase reflects strong fundamentals underscoring US dealmaking. While this may cause financing to be slightly more expensive, elevated stock markets and robust domestic growth will ensure that conditions remain favorable for deals. "There is still confidence, optimism and capital available, so it is going to stay busy. The key factor is the stock market. Until the stock market falls back significantly for a long period, we are likely to continue observing substantial M&A activity," Reiss says.

Yet after two years of high-profile megadeals across an array of industries, there are reasons for caution in 2018. The full impact on tax reforms, including their impact on highly leveraged transactions, is yet to be fully understood. Heightened geopolitical tensions could serve as a brake on activity. And continuing uncertainty on the regulatory front will negatively impact dealmaking. Additionally, the administration's plans to invest in infrastructure have also yet to materialize. "There are many positives out there, but the picture is mixed," says Pryor

The recently enacted tax reform on the whole should support M&A, but not all the measures are deal-friendly.

President Trump scored his first legislative victory, as the Republican tax bill became law at the end of 2017, following a relatively smooth passage through Congress. This should be good news for dealmakers. The package includes two major reforms that are widely expected to have a positive impact on deal activity, namely a cut in the headline corporate tax rate and lower tax rates on repatriated earnings.

Under the new tax plan, earnings and profits held overseas are subject to a substantially reduced one-time tax of 8 percent on illiquid assets and 15.5 percent on cash and cash equivalents, after which such amounts will be brought back to the US without additional tax. With Capital Economics estimating that US companies are sitting on US$2.6 trillion-worth of overseas cash, bringing this capital back home could give domestic M&A a big boost. "The so-called tax holiday on repatriation is certainly going to bring more cash into the system. I expect that a substantial portion of it will be used to benefit shareholders through buybacks and dividends, but it is also likely that it will increase deal activity," says Andrew Kreisberg, partner at White & Case.

Changes to the rules allowing for the immediate expensing of capital assets could provide a further lift, particularly for companies in capital-intensive industries such as manufacturing. Under the bill, the immediate expensing of capital assets would generally apply to acquisitions of new or used property prior to January 1 2023, with the benefit being phased out after that. "Subject to certain exceptions for real estate and public utilities, if you structure a transaction as an asset deal, you will be eligible for a full and immediate depreciation deduction. This could be a significant incentive to do a deal," Kreisberg says.

Clouds on the horizon

The Trump package, however, isn't all deal-friendly. The new legislation significantly limits interest deductions, which could impact deal economics. And the lower corporate tax rate will not necessarily free up large amounts of capital in the way that may be expected. "The reduction in the corporate tax rate is going to be balanced out by the elimination of certain tax benefits," Kreisberg explains. "Overall, I'm not sure how much a lower headline rate will impact M&A."

In 2017, the number of CFIUS applications hit a new high in recent CFIUS history 2017 saw a fall in inbound M&A value into the US. One explanation has been the push-back from the Committee on Foreign Investment in the United States (CFIUS). The inter-agency body, tasked with reviewing the impact of deals on national security, took a tougher line on some foreign deals under the Trump Administration. For instance, Chinese investments into the semiconductor space as well as other sensitive technologies drew heavy attention and there were increased reports of abandoned transactions because of "unresolved national security concerns" identified by CFIUS.

Transactions that failed to clear in 2017 include the US$1.2 billion bid for Lattice Semiconductor Corporation by China-backed Canyon Bridge Capital Partners, which was blocked by President Trump on advice from CFIUS. Chinese smartphone manufacturer TCL Industries' bid for the mobile hotspot business of Inseego Corporation and the proposed sale of Wolfspeed to Germany's Infineon were among several transactions that were called off due to CFIUS concerns.

The number of filings received by CFIUS was the highest it has been since 1990. "The number of formal filings in 2017 was well above 230, in fact somewhere between 235 and 245, which is quite a remarkable number for CFIUS," says Farhad Jalinous, partner at White & Case. In addition to notified transactions, CFIUS continued to proactively look for "non-notified transactions," deals of interest to CFIUS that were not voluntarily submitted for review by the parties involved. This increased the number of reviews by capturing transactions where the parties were "invited" by CFIUS to make a filing.

Although CFIUS has become more aggressive under the Trump Administration, the statute and regulations that govern its work did not change in 2017. Two bills were introduced in Congress with strong bipartisan support to overhaul the existing statute, and there is speculation in DC that the new legislation will be finalized in 2018.

Although the CFIUS process is focused on national security, CFIUS is part of the Executive Branch. "The ultimate authority on allowing or disallowing a transaction rests with the President, so the President and the Administration do play a very critical role in how the process is conducted," Jalinous says.