PTAB by the numbers: A closer look at the most recent PTAB AIA trial statistics
Blog IP Intelligence: Insight on Intellectual Property

The United States Patent and Trademark Office (USPTO) recently posted the Patent Trial and Appeal Board (PTAB) statistics for December 2019 (first quarter of FY2020).[1] Despite some inconsistences in the data, the statistics reveal some trends:

A more detailed discussion of these trends follows.

I. IPRs remain the most prevalent AIA trials, and the number of AIA trial petitions in FY2020 remains unchanged or appears to show a decrease compared with FY2019.

The number of IPR petitions almost doubled in December (144) compared with November (74). In fact, December 2019 is the second highest month for IPR petition filings in FY2019 and FY2020. The highest month for AIA petition filings was November 2018 (212 IPRs, 10 CBMs and 2 PGRs) [3], which was an anomaly as the PTAB changed the claim construction standard in November 2018.[4] It remains to be seen if December 2019 is a new trend.

II. As before, electrical, computers, mechanical and business methods account for the vast majority of AIA trials.

When AIA trials were first instituted in FY2013, the majority of them resulted in settlement. Since then, settlements have decreased. 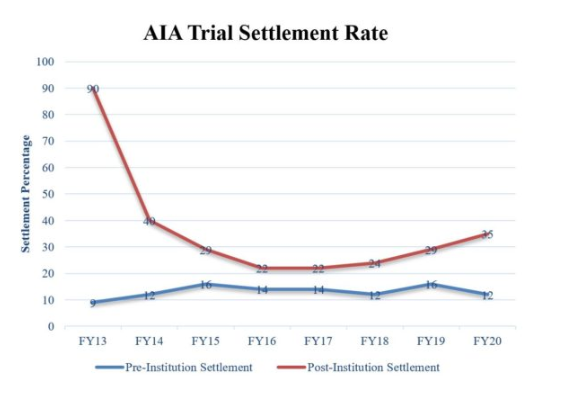 V. Denial of institution and final written decisions are the most common outcomes for AIA trials.

The PTAB trial statistics, which exclude joined and dismissed cases, indicate that only in 21% of AIA trials were all claims found unpatentable. Sixty-three percent of all AIA trials are resolved by denial of institution (33%) and settlement (30%). Only about a third of AIA trials reach a final written decision. Overall, the outcomes of AIA trials appear to be more favorable to the petitioner. 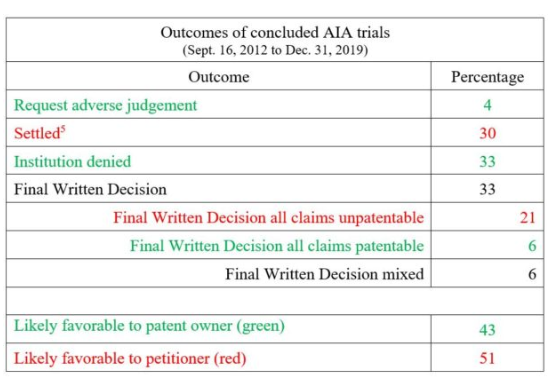