Public attention surrounding movements such as #metoo and #timesup has shone a light on sexual harassment in the workplace and placed emphasis on damage limitation, consequences, preparedness and reactivity

The past half century has seen positive developments regarding women’s working rights globally, aided by policy change, media campaigns and public movements, and an overall shift in the perception of working women. However, statistics show that sexual harassment against women, which permeates the lives of many women around the world, is still a pervasive threat in the workplace.

A survey by the Fundamental Rights Agency in 2014 found that more than half of all women living in the EU have experienced sexual harassment at least once since the age of 15.

In Spain, a Metroscopia survey has suggested that 56 per cent of respondents believe society does not take sexual harassment prevention seriously. Almost a third of all women surveyed reported feeling sexually harassed at least once in their lifetime (a figure that rises to 47 per cent among women in the 18-34-age bracket) and, perhaps even more worryingly, it’s been suggested that there is no data around sexual harassment in the workplace.

However, despite heightened public attention, ‘sexual harassment in the workplace’ was chosen by a mere 2 per cent of total respondents in the Ius Laboris forces for change research as one of the most concerning issues in the past year.

It could be pertinent to question whether this apparent lack of concern is due to a misunderstanding as to what constitutes sexual harassment. The Council of Europe on preventing and combatting violence against women – known as the Istanbul Convention, defines sexual harassment in Article 40 as ‘any form of unwanted verbal, non-verbal or physical conduct of a sexual nature with the purpose or effect of violating the dignity of a person.’ In the US, sexual harassment is deemed a form of sex discrimination that violates Title VII of the Civil Rights Act of 1964, applying to employers with 15 or more employees, including state and local governments.

In the EU, the issue was initially addressed in 1991, when the EU adopted a (non-binding) recommendation on the dignity of men and women at work and a Code of Practice on measures to combat sexual harassment. The first legally binding legislation defining sexual harassment was adopted in 2002 and the most recent EU law is a directive from 2006. However, though the laws are consistent, approaches differ across EU member states.

For example, sexual harassment is a criminal offence in France, defined by repeatedly imposing behaviours or discussions with a sexual connotation on a person that offend human dignity or create an intimidating, hostile or offensive situation for the individual. In Belgium, there is comprehensive legislation around prevention of psychosocial risks at work (including stress, conflicts and burnout) and this comes under the law on wellbeing at work, which covers safety and security and employee health. Italian law mirrors the EU definition and defines sexual harassment as a form of discrimination and, in particular, as unwanted conduct of a sexual nature expressed in any way which violates, or is intended to violate, the dignity of an employee or which creates an intimidating, hostile, degrading, humiliating or offensive working environment. Italian employers are liable to ensure the health and safety of all employees under Article 2087 of the Italian Civil Code.

However, the research findings suggest there is a solid understanding of this issue, with 86 per cent of total respondents somewhat or completely agreeing that ‘there is a clear, defined understanding of what constitutes sexual harassment within (their) business’. Research into the current or planned actions businesses have in place to address, mitigate or limit sexual harassment seems, however, to indicate a surprising level of inactivity. In fact, as much as 42 per cent of total respondents have made no changes in response to rising media attention around sexual harassment issues – potentially leaving their businesses exposed.

So, what is the problem?

According to a 2017 study by the UCLA’s World Policy Analysis Center in the United States, about 235 million women in more than a third of the world’s countries are not currently covered by laws against sexual harassment at work.

In the UK, a 2018 House of Commons Women and Equalities Committee report agreed that sexual harassment in the workplace is ‘widespread and commonplace’ but admitted there is currently little incentive for employers and regulators to take robust action to tackle and prevent unwanted sexual behaviour in the workplace.

The report suggests that focus on protecting data may have diverted attention away from tackling sexual harassment and that some non-disclosure agreements are used to prevent or dissuade victims from reporting sexual harassment to the police, regulators or other appropriate bodies. The House of Commons report also cited a shocking lack of awareness at the most senior levels of employers about the extent of sexual harassment in their organisations. This, the report argues, could be to do with the underrepresentation of women in leadership positions.

Sexual harassment in the workplace has continued because, simply, says Andrew Weir, employer services manager at Moorepay, “it has continued to be permitted. Both victims and witnesses often fear reprisal and so the behaviour goes unreported. Sadly, I have advised a number of firms where HR departments have earned the reputation of protecting the company’s position over the years and so victims felt unable to complain until after they had left. This can result in an employment tribunal claim when of course HR’s role should be to protect the interests of the company and, to the victim and witnesses, often still employed, it reinforces the belief.” 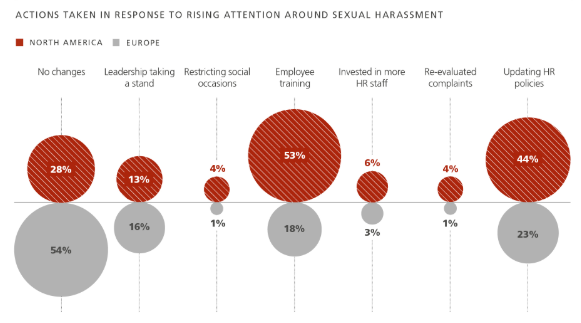 The Ius Laboris research suggests that ‘plans’ to address sexual harassment issues may be legacy – therefore, the reason why those who have, in the past year, taken no action to address sexual harassment in the workplace, could be because they already have some plans in place. However, with all legacy plans, it’s pertinent to question whether company policies or practices are truly up to date and, indeed, adequately responsive for the modern workplace.

According to the research, North America seems to be leading the way in terms of preparedness of dealing with the issue of sexual harassment. Just 28 per cent have made no changes in North America, compared with 54 per cent of those in Europe.

On a scale of 1 to 7 (where 7 indicates completely prepared with a comprehensive plan in place) North American respondents ranked their level of preparedness to deal with ‘sexual harassment’ on average as a point 5. Preparedness levels to deal with discrimination generally was ranked at a level 5 by both total respondents and North American respondents specifically – indicating that of all the issues, this is one they are most ready to address and have planned for. Indeed, 53 per cent in North America have invested in employee training surrounding sexual harassment in the workplace and 44 per cent have updated their HR policies accordingly. This commitment is greater than in Europe, with just 23 per cent updating HR policies and a mere 18 per cent investing in employee training. Again, this could mean that European-based firms have already invested in or carried out these actions, but in the current climate, the need to stay up to date and fully reactive is more critical than ever.

Yvonne Frederiksen, partner of Ius Laboris Danish firm, Norrbom Vinding, says: “One of the reasons may be that – except perhaps in the UK – European employers have up and until now been faced with relatively few sexual harassment claims, so most European employers do not consider themselves at high risk of being hit with a claim. In addition, cultural workplace norms vary significantly across Europe, so even though most countries have implemented the same EU definition of sexual harassment, how it is interpreted can differ significantly. For instance, what is considered sexual harassment in the workplace in the UK might not be considered as such in Italy.”

It’s not a case of companies not doing enough, says Aliya Vigor-Robertson, co-founder of JourneyHR, “It’s more about how they can improve the way they respond and, even more importantly, avoid incidents like these from happening in the first place.”

Andrew Weir says, “Companies of all sizes must have a robust and consistent policy in place and all employees must sign as having read and understood any such policy. The onus falls on the employers to ensure that employees are aware of the repercussions of their actions and their options in any situation.”

On top of this, says Weir, it’s essential to build a culture where employees feel supported. He suggests annual equality and diversity training, supported by HR departments/company directors actively promoting the values within the training throughout the year.

“By creating a clear code of conduct for employees to adhere to from the outset, an environment of respect and open communication is developed and nurtured,” agrees Kirsten Cluer, HR consultant and owner of Cluer HR. “It will also help to create a sense of camaraderie between employees, meaning that should an employee exhibit unacceptable behaviour, more people are likely to speak out against it.” She adds, “Naive inactivity towards sexual harassment cannot be an option if a safe workplace environment is to be adopted.”