The main purposes of amending these two legislations, which are of ultimate importance to the supervision of foreign funded banks (“FF Banks”) are to put into practice the country’s opening-up policies in the banking sector, to make law to implement the opening-up measures in the banking sector, which have been repeatedly referred to by senior government officials in various summits and public speeches, and to further liberalize the foreign investment in China’s banking sector.

The amendments made by the Consultation Papers focus on the following aspects:

Ⅰ. Institutions Subject to the Regulation of the Consultation Papers

As early as 17 August 2018, CBIRC abolished the Administrative Measures on Equity Investment by Foreign Funded Financial Institutions in Chinese Funded Financial Institutions, and removed the 25% ceiling of foreign shareholding in a Chinese funded commercial bank by amending the Implementation Measures of the Administrative Licensing Items for Chinese Funded Commercial Banks. It is also stipulated that a commercial bank will be regulated as the category of the bank as the one when and into which the foreign investment is made.

Therefore, foreign banks may set up from scratch joint-venture FB LIBs (“JV Banks”) or wholly foreign owned FB LIBs (“WFOBs”) regulated as FF Banks, or may otherwise become, by way of making investments into Chinese funded commercial banks, the shareholders of joint-venture banks with more than 25% foreign ownership or wholly foreign owned banks, which are converted from and regulated as Chinese funded commercial banks.

Notwithstanding the above, the institutions subject to the regulation of the Consultation Papers remain those regulated as FF Banks, namely WFOBs, JV Banks, FB Branches and PRC representative offices of foreign banks. As far as joint-venture banks or wholly foreign owned banks converted from and regulated as Chinese funded commercial banks as the result of the investment by foreign banks are concerned, the Consultation Papers do not apply.

One of the most appealing changes made by the Consultation Papers is that foreign banks would be allowed to maintain both FB LIBs (i.e. WFOBs and JV Banks regulated as FF Banks) and FB Branches) at the same time. As a result, foreign banks would no longer be forced to make a hard choice between local incorporation and keeping FB Branches.

Back in late 2006, when converting their FB Branches into WFOBs, foreign banks were allowed to retain an FB Branch to carry on their foreign exchange (“FX”) wholesale business for a certain period of time (i.e. a transition period), in order to facilitate the to-be-established WFOBs to meet the relevant regulatory indicators requirements and to facilitate the retained branch to phase out the outstanding FX wholesale business, only that such retained branch shall be closed upon the expiry of the transition period.

However, in the Implementation Rules of the Regulations of the PRC on the Administration of Foreign Funded Banks which was promulgated on 1 July 2015 and took effect on 1September of the same year, the relevant provisions on the retention of an FX wholesale business branch upon local incorporation of foreign banks were deleted, thus made such approach no longer workable. In practice, CBIRC (then the China Banking Regulatory Commission) also rejected the application from any foreign bank for retaining an FX wholesale business branch when converting its FB Branches into a WFOB.

This policy change directly led to the delay in the local incorporation process of some foreign banks since, without the FX wholesale business branch retained, their to-be-established WFOBs may not meet the specific regulatory indicators requirements.

Now, the change made by the Consultation Papers allowing foreign banks to maintain both FB LIBs and FB Branches (although the Consultation Papers require that in such circumstances, the FB Branches would only be allowed to conduct the wholesale business, with a substantial breakthrough being that such wholesale business covers not only FX business but also RMB business) at the same time would make it easier for foreign banks to enter into the China market.

It is worth mentioning that the Consultation Papers also set out prohibitions or restrictions on the independence and the risk isolation mechanism of the management, personnel, business, information and related party transactions of FB LIBs and FB Branches.

Ⅲ. Lifting the Restrictions on the Conducting of the RMB Business

With regard to the RMB business, the following material changes are made by the Consultation Papers:

The Administrative Regulations Consultation Paper includes “acting as the issuance agent, payment agent and/or underwriter of Chinese government bonds” into the business scope of FB LIBs and FB Branches. Thus, the business scope of an FB LIB is substantially the same as that of a Chinese funded commercial bank.

In addition, the Implementation Measures Consultation Paper restates that the following types of business of FB LIBs and FB Branches are subject to the afterwards reporting requirement only, which was provided in the Circular on the Conducting of Certain Businesses by Foreign Funded Banks (the “Circular”) issued by the General Office of CBIRC on March 10, 2017 and now documented into a regulation by CBIRC: (1) acting as the issuance agent, payment agent and underwriter of Chinese government bonds; (2) providing custody, escrow and guardianship services; (3) providing consultancy services such as financial advisory services; (4) providing overseas wealth management services for and on behalf of the clients; and (5) such other businesses as CBIRC may deem to be subject to the afterwards reporting requirement.

Furthermore, the Implementation Measures Consultation Paper restates the regulations of the Circular allowing the intra-group cooperation (namely, allowing FB LIBs and FB Branches to cooperate with their parent bank groups to provide comprehensive financial services to Chinese enterprises in offshore bond issuance, listing, acquisition, financing and the like by taking the advantages of their global service networks.

In respect of the operating funds requirements of FB Branches, the Consultation Papers have made the following adjustments as well: 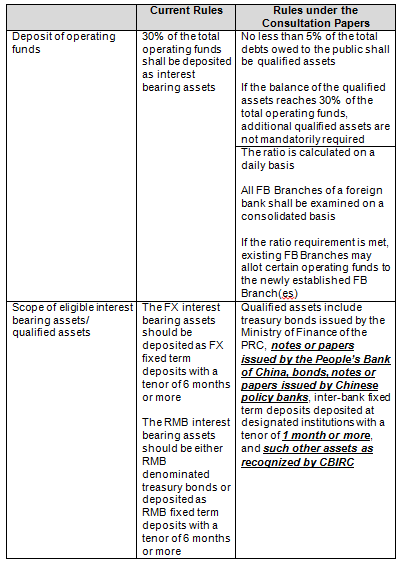 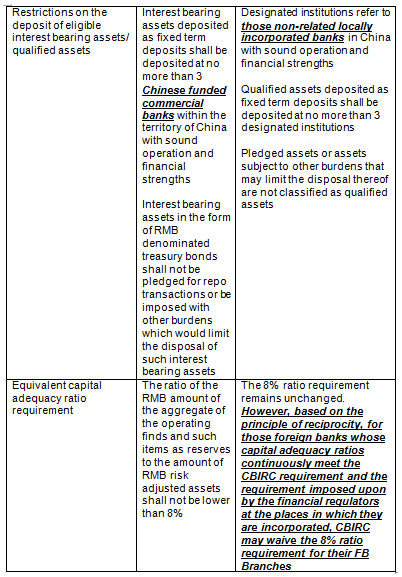 Ⅵ. Other Changes and Our Observations

Apart from the above significant changes, the Consultation Papers also make certain changes in the areas such as the outsourcing activities conducted by FB LIBs and FB Braches and their termination and liquidation.

Although the Consultation Papers are subject to the solicitation of public opinions before finalization, one can be assured that China is on the track of more opening-ups in its banking sector.