Facebook’s Libra a look at the regulatory law aspects

On 18 June 2019, Facebook attracted worldwide attention by announcing its plans for a new cryptocurrency: Libra. Responses quickly followed from politicians, bankers, regulatory bodies, and commentators. In the Netherlands, parliamentary questions about Libra have already been posed to the Minister of Finance.

Without going into the advantages and risks of Libra, this blog explores a number of financial regulatory law aspects of Libra, from the perspective of the current European and Dutch regulatory framework. The description of Libra and its underlying structure are based on the papers published by the Libra Association in June 2019.

Libra: where does it come from and how is it going to work?

Facebook is currently the driving force behind the development of Libra, but formally, two different organisations are working on this initiative, the Libra Association and Calibra.

The Libra Association says that it is an independent non-profit organisation based in Switzerland. Its responsibilities include managing the Libra Reserve (see below) and defining the long-term strategy of the Libra project. Major enterprises such as Facebook, Uber, PayPal, MasterCard, Visa, eBay, Coinbase, Vodafone, and Spotify have joined the Libra Association as Founding Members.

Calibra is a subsidiary of Facebook. Among other things, Calibra will provide the wallet that allows users to access Libra and carry out transactions with it. Facebook claims to have opted for the creation of a separate entity because that will allow the social and financial data of its customers to remain separate.

The aim: a stable digital currency for worldwide use

The Libra Association’s Whitepaper describes Libra as a “simple global currency and financial infrastructure that empowers billions of people”. Libra is intended to improve access to financial services and lower their cost, regardless of where a person lives and of his/her financial position. Transactions with Libra are validated by the Founding Members and administered within the Libra blockchain.

The Libra Association is empowered to issue new Libra through the blockchain and to withdraw Libra that are already circulating. It says that it will only do this in response to the demand and supply for Libra from authorised resellers. These parties form the link between the buyers and sellers of Libra to users on the one hand and the Libra Association on the other.

Libra intends to distinguish itself from cryptocurrency such as Bitcoin by its price stability, which is where the Libra Reserve comes in. The idea is for the fiat money with which authorized resellers purchase new Libra from the Libra Association (such as euros, dollars, yen and renminbi), to be added to the Libra Reserve. Conversely, when authorized resellers offer their surplus Libra to the Libra Association in exchange for fiat money, the Libra Reserve will shrink. The funds in the Libra Reserve will be invested in (relatively) stable and liquid assets such as bank deposits and short-term government bonds in various currencies. The purpose of this construction is for Libra users to be able to trust that they can exchange their Libra for fiat money at any time, with the amount received being about equal to their “share” in the Libra Reserve. This is supposed to prevent speculation and the associated price fluctuations, to which many other cryptocurrencies are currently subject.

The Libra Reserve is fuelled in a second way too. In exchange for their participation in the Libra project, the Founding Members are said to be required to, among other things, deposit 10 million dollars each in the Reserve, in return for (among other things) Investment Tokens to which certain pay-out rights are linked.

Diagrammatically, this can be viewed as follows: 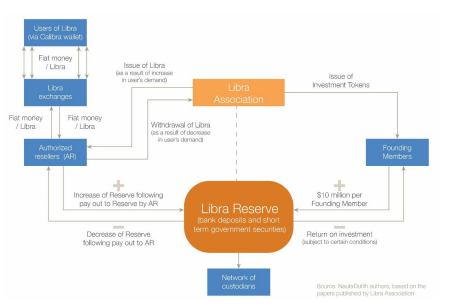 Libra and electronic money in the sense of the EMD

The proposed structure as described above raises a number of interesting questions from a regulatory law perspective. First of all, there’s the question of whether Libra qualifies as electronic money within the meaning of the EU E-Money Directive (EMD), which defines electronic money as:

“electronically … stored monetary value as represented by a claim on the issuer which is issued on receipt of funds for the purpose of making payment transactions …, and which is accepted by a natural or legal person other than the electronic money issuer”.

Unlike cryptocurrencies such as Bitcoin and Ether, it seems that the Libra initiators will make certain arrangements with authorized resellers for the exchange of surplus Libra for fiat money. Furthermore, the initiators promise that users will generally be able to exchange their Libra for local fiat money:

“Libra is designed to be a stable digital cryptocurrency that will be fully backed by a reserve of real assets …. That means anyone with Libra has a high degree of assurance they can convert their digital currency into local fiat currency based on an exchange rate, just like exchanging one currency for another when traveling.”(Libra Whitepaper, p. 7)

For the answer to the question whether Libra qualifies as electronic money regulated by EMD, it is especially relevant whether authorized resellers and/or users of Libra will actually receive a right of repayment enforceable against the Libra Association (and/or potentially other Libra distributors) following the purchase of Libra.

Libra and the attraction of repayable funds

Another question is whether the issue of Libra in exchange for fiat money in the Netherlands, could be regarded as attracting repayable funds from the public, for which the Dutch Financial Supervision Act sets out rules. In order for funds to qualify as repayable funds, it must, among other things, be clear in advance what nominal amount the fiat receiving party must repay to the fiat paying party at a certain point in time. Consequently, it is also in this respect relevant to look closely to the claim of authorized resellers and/or users of Libra against the Libra Association (and/or potentially other Libra distributors). We note that funds received in exchange for electronic money (see above), do not qualify as repayable funds.

Libra and payment services in the sense of PSD2

The Revised EU Payment Services Directive (PSD2) sets out rules for payment services relating to “funds”. For the question whether parties that facilitate Libra transactions within the EU may provide payment services subject to PSD2, it should (firstly) be assessed whether Libra qualifies as funds. Pursuant to PSD2, the notion of funds must be understood as cash (banknotes and coins), scriptural money, and electronic money. Libra is, of course, not cash, nor is it scriptural money. However, if Libra meets the definition of electronic money (see above), it qualifies as funds as referred to in PSD2.

Another question is whether the issue of Investment Tokens and/or Libra in the EU could qualify as offering units in a collective investment undertaking, to which the rules apply that are set out in the EU Alternative Investment Fund Managers Directive (AIFMD). In order for the AIFMD to apply, there must at least be an undertaking raising capital from a number of investors, with a view to investing it in accordance with a defined investment policy for the benefit of those investors.

The potential applicability of the AIFMD is first of all relevant with regard to the investment of funds by Founding Members established in the EU, in exchange for Investment Tokens. In this regard, the analysis will need to address the question whether the Libra Reserve is an investment undertaking and whether the Founding Members are a number of investors from whom capital is raised with a view to invest this capital. This will depend on the exact structure and the agreements entered into by the parties.

For the question whether authorized resellers and/or Libra users could be considered a number of investors from whom capital is raised with a view to invest this capital, it is, among other things, relevant to ascertain how the (exchange) value of Libra will relate to the value of the Libra Reserve. This seems not to be spelled out yet, although it is indicated in the Whitepaper that Libra users will not be entitled to a return realized on the assets held by the Libra Reserve.

In the event that the AIFMD is not applicable, one could wonder whether the Investment Tokens and/or Libra qualify as securities, such as shares or debt instruments with the Libra Association as debtor. In that case, among other things, the rules following from the Prospectus Regulation will need to be taken into account.

The Fifth EU Anti-Money Laundering Directive (AMLD5) for the first time explicitly subjects certain crypto-service providers to rules to prevent money laundering and the financing of terrorism. This concerns providers of cryptocurrency-related exchange services and providers of “custodial wallets”. We discussed the scope and content of the relevant obligations in detail in a previous blog.

Parties that intend providing abovementioned services in the Netherlands in relation to Libra, will probably have to register with the Dutch Central Bank (DNB) and comply with the Dutch Money Laundering and Terrorist Financing (Prevention) Act. According to the Dutch AMLD5 Implementation Act (as submitted to the Dutch House of Representatives), parties established in third countries, such as Calibra, cannot register with DNB – and thus not provide abovementioned services in the Netherlands – unless they are based in a third country approved by the Minister. AMLD5 must be implemented in the national legislation of EU Member States by 10 January 2020.

From a regulatory law perspective, the Libra project triggers various interesting, complex and cross-border questions, aside from the current (political) discussions on Libra. In this blog, we have explored a number of potentially relevant regulatory frameworks, without trying to be exhaustive. For example, we have not addressed the potential applicability of MiFID II, PRIIPs, EMIR and sanction regulations.