As the effects of global restrictions to prevent further spread of the Covid-19 coronavirus outbreak begin to impact the shipping industry, our team of marine experts have advised ship owners and ship builders to check the details of their contracts to clarify whether any delays are covered under force majeure rules.

Since the outbreak of the COVID-19 novel coronavirus (Covid-19) in China, some Chinese shipbuilding companies have postponed the shipbuilding construction, which has inevitably affected the production process under the relevant shipbuilding contracts. Given the duration of the Covid-19 epidemic is still unclear, the operation efficiency of the shipyards in China will likely be hindered by the slow resumption of work. Recently, there were reports that some Chinese shipbuilding companies have also issued ‘force majeure’ notices to the buyers in favour of the potentially postponed delivery of the newbuilding vessels.

It is worth noting that the China Council for the Promotion of International Trade (CCPIT), which is officially accredited by the Ministry of Commerce of People’s Republic of China, has announced on 30 January 2020 that it would issue ‘force majeure’ certificates to qualifying applicants, for the purpose of ‘shielding’ the companies from legal damages resulting from the Covid-19. Since the first certificate issued on 2 February 2020, more than 4,000 force majeure certificates have been issued by the CCPIT.

On 10 February 2020, Mr. Zang Tiewei, spokesperson of Commission of Legislative Affairs of the National People’s Congress Standing Committee, expressed that ‘for the parties who are unable to perform the contract, the epidemic is an unforeseeable, unavoidable and insurmountable force majeure. According to the Contract Law of the People’s Republic of China, except otherwise provided by law, parties could be exempted from performing contracts in part or in whole due to the event of force majeure’. Thus, whether the Covid-19 constitutes a force majeure event in the contract, and whether the affected companies can be exempted from contractual liability have become one of the very topical issues.

Due to the Chinese government’s epidemic prevention measures, it is an objective fact that there have been delayed resumption of work, traffic control, and restricted dispatch of labour personnel etc. Hence, the force majeure certificates issued by the CCPIT may arguably constitute a prima facie evidence, or at least persuasive proof of the force majeure event resulting from the Covid-19.

However, for a party to invoke force majeure and get an exemption from its contractual liabilities under the Chinese law, proving the force majeure event is the only first step. The next step is that the invoking party has to show that the delay, disruption or breach of the contract is caused by the force majeure event (an objective circumstance that was unforeseeable, unavoidable and insurmountable such that it rendered performance impossible), despite that it is not necessarily to be the only reason (as opposed to the English law position). In addition, subject to the terms of the force majeure clause, under the Chinese law the invoking party also has a duty to mitigate the loss, and it shall give a notice to the other party about occurrence of the force majeure within a reasonable time.

This article thus attempts to compare and contrast the key elements of the force majeure clauses in different standard shipbuilding contracts. The standard contracts include: 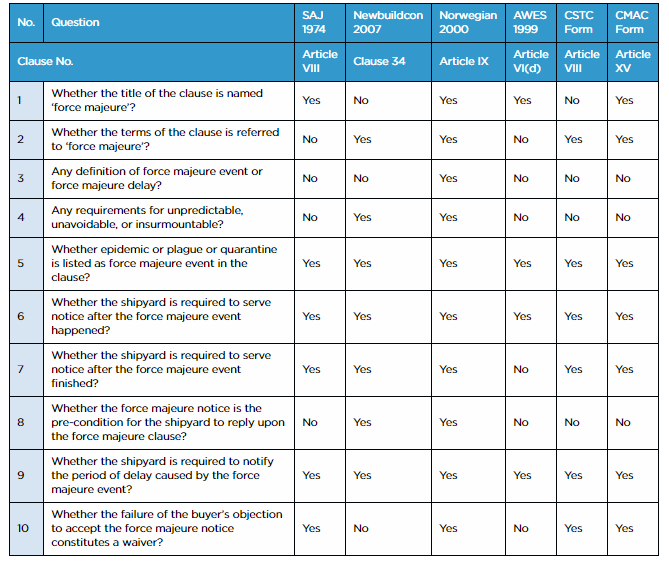 In conclusion, regardless of the standard form adopted in the shipbuilding contract, in order to rely on force majeure event and obtain an extension to the delivery date, the shipyard will have to establish at least the following three points:

b. The delay to construction process or delivery of the vessel is caused by the force majeure event

c. The notice requirements set out in the force majeure clause are satisfied

As the outbreak of the Covid-19 would create continuing uncertainty, and for the purpose of dealing with the future outbreak of epidemics, the practical tips below are worthwhile to be borne in mind by the commercial parties in a timely and thoroughly manner:

Edward Liu, advises ship buyers whose vessels may be delayed to review their contract terms and in particular the force majeure clause, to collect evidence of force majeure events in relation to any delay, and to adopt appropriate mitigating measures to reduce any impact on contractual performance.

In addition he advises ship builders to consider how the epidemic situation will affect their supply chain and to formulate emergency plans in case of problems.

Edward Liu said: ‘These are difficult times for many industries and the shipping sector is not exempt. While it is essential to support measures which reduce the spread of this potentially deadly virus, it is also important to ensure that the businesses which support many people’s livelihoods are as resilient as possible.’