On January 23, 2020, Transparency International published its 2019 Corruption Perceptions Index (CPI),[1] which measures perceptions of public sector corruption in 180 countries. Viewed together with the 2019 TRACE Bribery Risk Matrix,[2] which also includes private sector corruption, the Asia Pacific (APAC) region overall remains generally high risk for bribery and corruption relative to other parts of the globe, with some notable exceptions.

The average CPI score for 2019 across APAC—45 out of 100—surpassed other regions except Western Europe and the EU (66), and was better than the global average (43). APAC countries that have historically ranked highly (e.g., New Zealand, Singapore, Australia, Hong Kong, and Japan) continued to do so, with some demonstrating slight improvements in their CPI scores. Historically underperforming countries (e.g., Cambodia, North Korea, and Afghanistan) also remained in place, with no significant improvements. Gains in South Korea, Malaysia, Indonesia, and China were offset by declines in India, Mongolia, and the Philippines.

While Transparency International and TRACE measure different types of corruption and use different methodologies, the two sets of rankings provide a largely consistent and useful point of reference for companies performing "risk-based" transactional and customer due diligence in APAC. However, there are some differences between the two which require a deeper dive into the analysis underlying the rankings.

For example, both indices place Vietnam among high risk countries, but the country gained 21 places in the 2019 CPI, moving from 117 to 96. This improvement may reflect new regulations issued in August 2019 to implement its anti-corruption laws. However, in the 2019 TRACE Matrix, Vietnam declined by 18 places from 142 to 160, largely due to a lack of government transparency and media freedom, factors not weighed in the CPI. Brunei’s rankings highlight another discrepancy. The country appears as medium risk in the CPI, with its score declining slightly from 31 to 35 between 2018 and 2019. In contrast, the TRACE Matrix deems Brunei high risk with a ranking of 142, a decline of 35 spots from 107, based largely on the same factors, i.e., lack of government transparency and media freedom. Accordingly, when comparing a country's CPI and TRACE rankings, it is helpful to review individual country reports for an analysis of the basis for the rankings, as some factors are more relevant in evaluating bribery risks in the commercial context.

It also is helpful to note that the 2019 rankings may not reflect the impact of recent developments. Indonesia improved its 2019 CPI score and its TRACE ranking. However, the rankings do not reflect the recent weakening of the Komisi Pemberantasan Korupsi (KPK), the government agency tasked with tackling corruption and bribery in Indonesia. Legislative amendments passed in September 2019 restricted the authority of the agency to wiretap, allowed for cases to be dropped if investigations are not completed in two years, and reduced the KPK's independence. The amendments attracted fierce protests in the country in 2019, and may affect Indonesia's CPI performance in 2020.

The CPI and the TRACE Matrix are useful tools to analyze corruption risks. Companies doing business in APAC can have a positive effect on market practices through risk-based pre-transactional due diligence and compliance remediation—backed by stringent contractual undertakings with counterparties requiring the adoption and enforcement of strong internal anti-bribery and corruption policies and procedures. 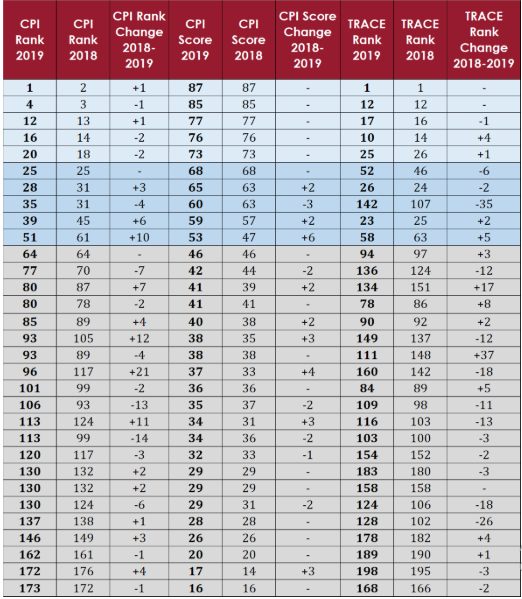