Rospatent refused to register the trademark of the high-speed trains from Moscow to Nizhny Novgorod and Berlin. Their logo turned out to be similar to the logo of the Moscow logistics company.

The subsidiary company of the Russian Railways purchased trains from the Spanish company “Talgo” in 2014. They shuttle in two directions from Moscow - to Nizhny Novgorod and Berlin - in and out. Rospatent refused to register a trademark including a bird on a blue background in February 2019. The RZD tried to appeal the decision in the Chamber for Patent Disputes, but again was refused.

The signs have a similar idea - fast “delivery”. Compared designations are associated with each other in their composition of a pictorial element in the form of a stylized image of a bird. The lawyer of the logistics company “Strizh” says that they were contacted by the RZD representatives regarding the use of the trademark. Negotiations were started, but ended pretty soon as the issue could not be reached on anything.

The “Strizh” trains have run between Moscow and Nizhny Novgorod since June 2015, a number of trains follow with stops in Vladimir, Kovrov and Dzerzhinsk. Trains have run to Berlin (with a stop in Minsk) since December 2016. The speed of the train is up to 200 km / h. They are becoming well-known. 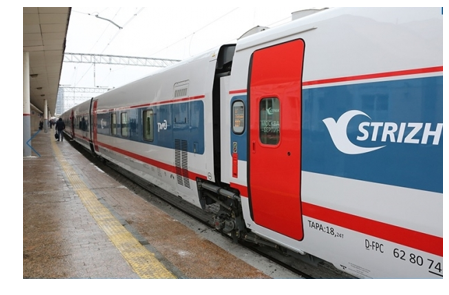