When the sky is the limit: understanding upward development

Whichever party wins the General Election, it will face the same acute shortage of homes in the UK and significant numbers of new social housing units required. The Ministry of Housing, Communities and Local Government Plan (updated in June 2019) makes housing provision its first objective. It aims to support the delivery of a million homes by the end of next year, a further half million by the end of 2022 and an average of 300,000 net each year by the mid 2020s.

With building land scarce and expensive, particularly in some urban areas, local councils, investors and developers are exploring the idea of building new homes above existing shops, offices and blocks of flats. For local authorities with existing low-rise blocks of social housing, building up is a cost-effective way of hitting housing targets and reducing waiting lists. For example, in London, Southwark Council resolved in September to explore using rooftop development as part of its strategy to deliver an ambitious target of 11,000 new council homes by 2043.

For private investors, the additional rent generated by new rooftop space should increase the capital value of the property and there are ways to reduce the construction cost to be offset against that capital increase.

Building up also has attractive environmental credentials: it is more sustainable to add to an existing building than demolish, discard materials and rebuild; the extension project can often be dovetailed with improvements to the existing building (eg insulation or improved efficiency of services); it avoids pressure to expand development onto greenbelt land and, in some cases, will support the push towards improving the vitality (and viability) of high streets.

There have been recent changes to national planning policy which support rooftop extensions for residential use and a further change (to introduce a new permitted development right) is being considered (see box, below). In London, the local plan recognises this already by supporting small-scale upward extensions. While very encouraging, these policy and legal developments will not overcome all the potential obstacles. Parties to a proposed rooftop extension need to think well ahead.

Legal considerations within the building

It is important to work out who owns the airspace to be occupied by the new space. A freeholder usually owns both building and airspace, but a long lease of the whole building often excludes the airspace. A well-drafted short lease (eg of the top floor of the building) will exclude the airspace from the demise and grant rights of access to the roof for limited purposes, eg to erect defined plant such as air-conditioning units and thereafter access them for maintenance. If it does grant the airspace to the current tenant, building up will be impossible unless that tenant surrenders the airspace. It may demand part of the action as its price for doing so.

Even a party which owns the airspace may find that others have rights to traverse it, or put equipment into it. A detailed analysis will be needed of how, when and at what cost such rights can be terminated, as the security of tenure regime under Part II the Landlord and Tenant Act 1954 may apply. The resulting delay in starting the works and potential additional cost may seriously affect the potential development profit.

Assuming it is possible to grant the developer the right to use the airspace, both parties should think carefully about whether the type of building and the proposed documentation will trigger an unwanted right of first refusal for existing tenants in the building under Part I of the Landlord and Tenant Act 1987. There are ways round this, for example by using a joint venture structure rather than a lease of the airspace, but this is unlikely to suit a freeholder who wants little risk.

Where the tenant of the new space will share the existing means of access through the building (lift/stairwell) and/or the facilities in it (riser cupboards, toilets), the developer needs to check the terms on which others are currently entitled to those facilities, and whether they permit sharing.

Lastly, those who want to build up must read their title deeds carefully (including their lease, if they are a tenant) to see if they impose restrictive covenants against building on the site, either absolutely or without the prior consent of a third party, or impose restrictions on the permitted types of building material.

Legal considerations outside the building

Where neighbouring buildings have windows overlooking the proposed development site, it is prudent to work out whether their access of light (and, in some cases, air) will be obstructed by the development to such a degree that they can seek damages or an injunction. This can be a tricky exercise, resting on previous contractual arrangements or common law.

The recent case of R (on the application of) McLellan v Medway Council [2019] EWHC 1738 (Admin) shows that potential obstruction of light to existing solar panels on an adjacent property should be a relevant consideration on a planning application. This is unlikely to change even if the permitted development right is brought in.

If the plan is to build the new units off site and crane them into position (often sold as one of the advantages of building up, because it is quicker and cheaper) the developer must assess where the crane can stand and whether the proposed trajectory of the boom will cross airspace owned by others, whose consent will be needed.

If the property will be occupied while the work is done, existing tenants will be concerned about potential noise, dust, compromised access, and (for commercial tenants) impairment of footfall to their business, or obstruction by scaffolding of their signs and display windows. Both the law of nuisance and the rule about quiet enjoyment under a lease may give tenants a legal handle to delay the development on these grounds. Check carefully and liaise with tenants early in the process as to the duration of work and disturbance levels and consider what reasonable steps can be taken to minimise that disturbance. As with rights of light, the tenant could be entitled to compensation. Rent reduction may need to be considered, depending on the level of disruption.

Thought must be given to the practical details of how the contractors will get up to the site (through the building or via a new external access), where they will park (are there vacant spaces on site?) and the hours they can work.

Existing tenants will want to ensure that none of the costs of construction, adaptation of the property to enable building up, or repairing consequential damage caused by the development, will fall to them via the service charge. Even if the leases would apparently permit this, sensible developers/freeholders will promise up front to insulate existing owners from such costs. Really prudent tenants will insist on a schedule of condition and/or a party wall award.

Once the new storeys are in place, the service charge regime in both new and existing leases must be harmonised so that each is paying its proper proportion. This may mean varying the existing leases (eg if they pay fixed percentages), which will require upfront legal agreements with both existing tenants and their lenders.

In areas where housing is needed and land is short or expensive, building up will be a useful, but complex option. Planners can facilitate it but will not eliminate many of the potential obstacles. 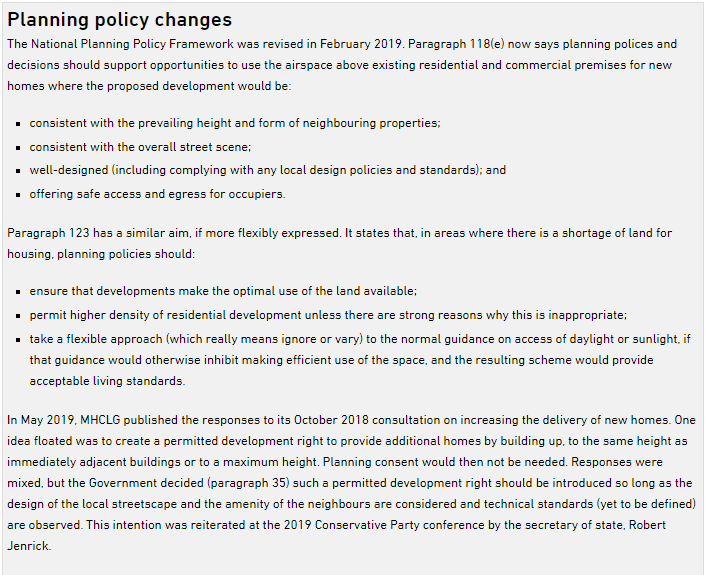 This article was published in Estates Gazette in November 2019.