Welcome to Brexit Business Brief, our regular newsletter looking at Brexit developments in a legal and business context.

To receive this by email please register your interest in receiving Brexit Insights.

The timetable from here

Following the UK Prime Minister’s statement in Parliament yesterday (read it here), the Brexit timetable now looks like this: 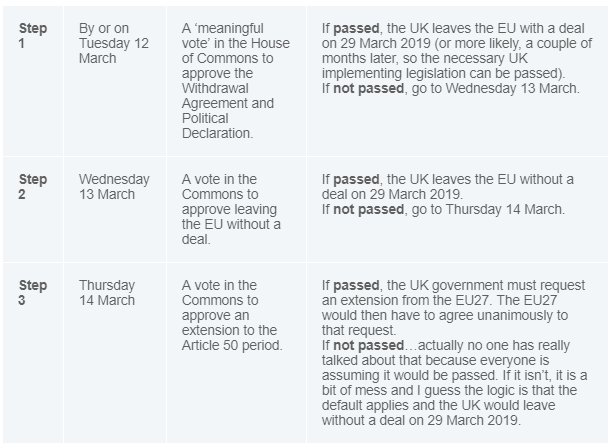 So the no deal cliff edge is just moved back to the end of June 2019?

That is what Mrs May argued yesterday: “…the House should be clear that a short extension – not beyond the end of June – would almost certainly have to be a one-off. If we had not taken part in the European Parliament elections, it would be extremely difficult to extend again, so it would create a much sharper cliff edge in a few months’ time.”

The thinking being, the EU27 would not agree to a further extension after June, as that would – for one thing – bring the legal standing of the then newly-constituted European Parliament into doubt i.e. the UK would still be a Member State but would have no MEPs. And also, frankly, everyone would just be fed up of the whole thing by then.

It may well be that pressure is exerted both from the EU27 and from Remainers for the extension to be much longer. So for a number of reasons, it is by no means nailed on that an extension specifically to the end of June 2019 is going to happen.

Is an extension even that welcome for business?

Well, yes, of course it is, for one thing it gives longer for everyone to attempt to get their no deal ducks in a row.

But for those businesses which have put in place no deal plans, it becomes even more of a muddle. For example, many businesses have stockpiled goods and supplies ahead of 29 March. That’s working capital sitting in warehouses. What do they do – use those goods now, and re-stockpile ahead of the end of June?

Another example: many businesses have put in place travel bans for staff for the start of April, so they can be on hand to deal with no deal crises. In some cases, staff have been asked not to go on holiday. What happens to those plans, are they rearranged to the end of June? And so on.

It remains government policy that the UK will leave with a deal on 29 March 2019. So it will whip its MPs to vote in favour of the deal on Tuesday 12 March. Some Brexit-supporting Labour MPs may well also do so.

The DUP has been coy as to its intentions of late; is it coming round to voting in favour, assuming some sort of tweak to the backstop is achieved?

If the DUP votes in favour, do all but the hardest of hardcore Brexiteers in the ERG then decide that they have got as far as they can, and vote in favour? Mr Rees-Mogg seems to be hinting at this (FT, paywall).

That would likely be enough to get the meaningful vote passed.

And so suddenly and unexpectedly, the UK then would be leaving with a deal on 29 March 2019 (or, as I say above, a couple of months after that, to enable the implementing UK legislation to be passed).

The UK government’s no deal paper for business

Yesterday, DExEU finally published the government’s 15 page no deal overview, ‘Implications for Business and Trade of a No Deal Exit on 29 March 2019‘.