A lesson in protecting Pacific investments from government intervention

The recent focus on Pacific Island nations highlights significant opportunities for foreign investors in the region.

However, investment in the Pacific is not without its challenges. Among the risks for foreign investors is the instability of domestic legal regimes in the Pacific, and the protection of investments from regulatory and government intervention.

We recommend that investors doing business in the Pacific include substantive rights and express consent to arbitration in their contracts concluded with the host State to provide an effective means of protecting their investment. While this may seem a simple solution, the ICSID arbitral award in Lighthouse v Timor‑Leste highlights the need to conclude an effective and enforceable arbitration agreement with the State and for foreign investors to be careful of steps taken before commencing a formal dispute process in order to preserve jurisdiction to refer a dispute to arbitration.

Despite the proliferation of the New York Convention on the Recognition and Enforcement of Foreign Arbitral Awards, the ICSID Convention,[6] bilateral investment treaties (“BIT”) and free trade agreements (“FTA”) around the world, the international legal framework concerning arbitration and the protection of foreign investments has not been implemented in the Pacific in the same way it has elsewhere.

In fact, the adoption of international treaties concerning international arbitral awards and investment protection is far from universal or uniform among the Pacific Island nations. From an analysis of 10 Pacific Nations, it is clear that investor-State arbitration, and even arbitration more generally, is not necessarily an accepted norm throughout the Pacific: 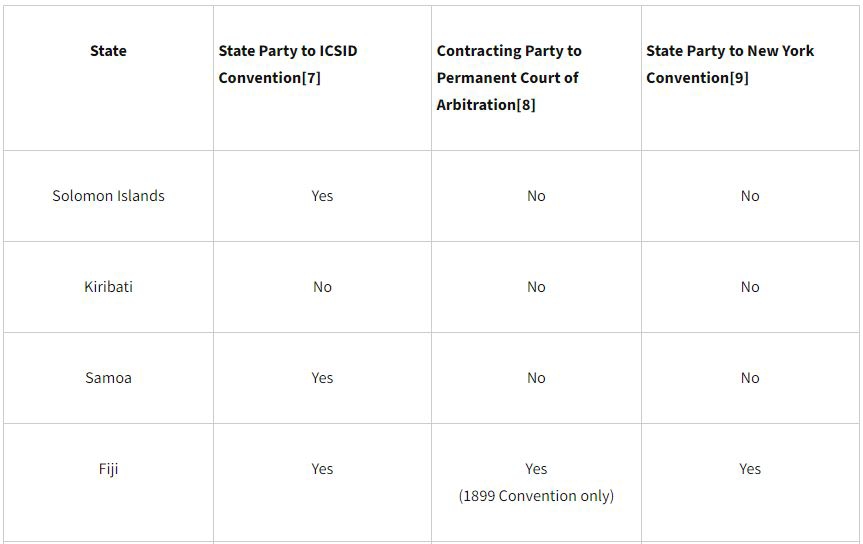 Likewise, bilateral investment treaties and free trade agreements are relatively uncommon in the Pacific and, to the extent that Pacific Island nations have entered into BITs or FTAs, they rarely provide the investor recourse to an independent arbitral tribunal to resolve any disputes should the State fail to honour its obligations under the treaty.

The investment chapter of the PACER Plus free trade agreement (to which Australia and a number of Pacific Island States are party) does not include any mechanism for investor-State dispute settlement (ISDS), but “encourages resolution of disputes through domestic courts”.[10]

The lack of international investment treaties among Pacific Island nations is apparent in the analysis set out below: 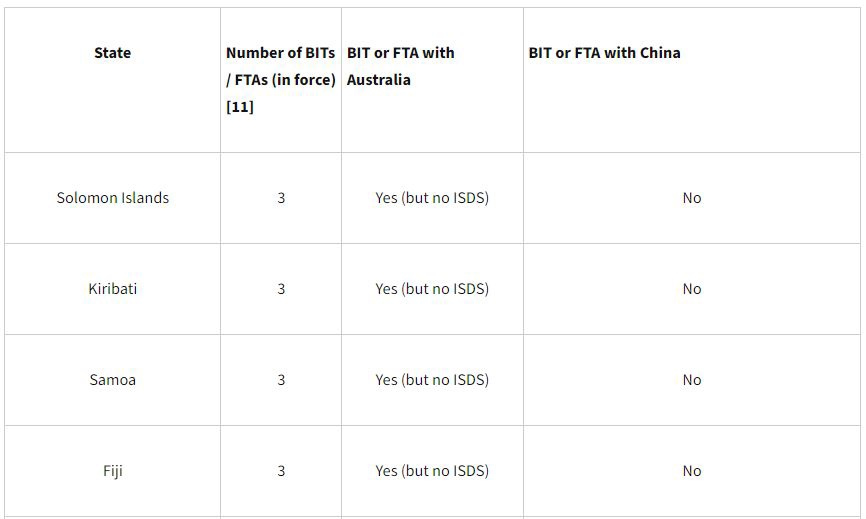 While domestic investment law may give some comfort to a foreign investor, there are two key shortcomings in relying upon such legislation.

2. Include arbitration clause in any investment contract

Case study of the Lighthouse v East Timor arbitration: the dangers of getting an arbitration agreement wrong

The 2017 decision of the ICSID Tribunal in Lighthouse Corporation Pty Ltd v Democratic Republic of Timor-Leste[13] demonstrates what can go wrong for foreign investors when dealing with sovereign States and how a poorly implemented arbitration clause and pre‑dispute case strategy can leave an investor with not only a false sense of security, but also unenforceable substantive rights.

The Lighthouse case concerned three interrelated agreements for the supply of high speed fuel and diesel generators by an Australian company – Lighthouse – to the State of Timor‑Leste. Lighthouse and Timor-Leste entered into three agreements between October and November 2010 which each contained a reference to Lighthouse’s “Standard Terms & Conditions of Supply.”[14] Whereas previous versions of Lighthouse’s standard terms provided for disputes to be resolved by local courts, a revised version of Lighthouse’s General Terms dated December 2010 referred disputes to arbitration under the ICSID Arbitration Rules.

Lighthouse filed a Request for Arbitration with ICSID on 16 December 2014, asserting that Timor-Leste had breached the various agreements between the Parties as well as provisions of the Timorese Foreign Investment Law.

In response, Timor‑Leste objected to the Arbitral Tribunal’s jurisdiction on three bases:

Article 25 of the ICSID Convention: an important jurisdictional gate

The Lighthouse Tribunal observed that Article 25(1), therefore, requires four conditions to be met before an ICSID Tribunal has jurisdiction:[16]

In the Lighthouse case, Article 25(1) of the ICSID Convention proved to be an insurmountable hurdle for Lighthouse since the Tribunal found that it lacked jurisdiction and dismissed the case.

There was no consent to ICSID arbitration under the contracts

In most ICSID cases, the requirement of consent to arbitration in writing is not likely to be controversial as the State’s consent is manifested in the relevant investment treaty invoked by the investor. However, given the Lighthouse case relied upon a contractual reference to ICSID Arbitration by way of reference to Lighthouse’s standard terms and conditions, the Tribunal undertook a careful analysis of the various contractual documents to determine whether the State had ‘consented in writing’ to submit its dispute to ICSID Arbitration.

The Tribunal determined that while it was possible to incorporate by reference an agreement to ICSID arbitration,[17] the parties had failed to do so in this case. The Tribunal found that:

The Tribunal also took comfort from Lighthouse’s post-contractual but pre-dispute conduct, including threats in correspondence to Timor-Leste that Lighthouse:[21]

The Tribunal considered this post-contractual but pre-dispute conduct to demonstrate that “the claimants were of the opinion that the applicable dispute resolution mechanism referred them to domestic courts”, not ICSID arbitration.[22]

The Tribunal also considered the “most telling conduct of the Claimants” to be the fact that almost one year after conclusion of the Fuel Supply Agreement, Lighthouse’s counsel sent a document to Timor-Leste seeking its consent to arbitration under the ICSID Convention.[23] Had Timor-Leste’s consent to ICSIC arbitration been embodied in the agreements or the standard terms from the outset, such a document would not have been necessary. Therefore, the Tribunal determined that Lighthouse’s conduct demonstrated that even it did not consider Timor-Leste to have consented to ICSID arbitration.[24]

The Tribunal also determined that Lighthouse could not rely on Timor-Leste’s consent to ICSID arbitration contained in its Foreign Investment Law (“FIL”).

Since Lighthouse did not hold a foreign investor’s certificate, did not have its investment approved and authorised by the Timorese authorities, and did not have a Special Investment Agreement authorised by the Council of Ministers, the Tribunal determined that Lighthouse was not entitled to protection under the FIL and was not permitted to rely on the consent to ICSID arbitration contained therein.[26]

Was there an ‘investment’ for the purposes of Article 25(1) of the ICSID Convention?

Having found in Timor-Leste’s favour on the first two jurisdictional objections, the Tribunal did not consider the third objection: that Lighthouse did not have an “investment” for the purposes of Article 25 of the ICSID Convention, but that the “transaction in question [was] an exchange of goods and services for payment”.[27]

There is a plethora of awards and academic scholarship concerning the jurisdictional limits on ICSID arbitration imposed by Article 25(1), but for the purposes of this article, it is necessary only to observe that ICSID tribunals only have jurisdiction in respect of disputes “arising directly out of an investment”.

Generally speaking, contracts for the supply of goods or services are not considered to be “investments” within the meaning of Article 25(1),[28] but tribunals have been careful to emphasise the necessity of looking at the investor’s operation as a whole as the line between what is, and is not, an “investment” is not always clear.[29]

Even though the Tribunal did not rule on this objection, it is likely that the Tribunal would have concluded that a contract for the supply of fuel and diesel generators was not an investment for the purposes of Article 25(1) of the ICSID Convention, and so may have found that it had no jurisdiction in any event.

Given the lack of international treaties (including BITs and FTAs) in the Pacific providing for investor-State arbitration, parties should consider including express arbitration agreements in any contract they conclude with the State to protect their investments from government intervention. The Lighthouse case demonstrates that merely drafting an arbitration agreement referring to ICSID arbitration is not a panacea: the choice of arbitral rules and arbitral institutions for disputes involving a State present unique challenges and require specialist advice to ensure that parties do not fall foul of any specific rules that may be unfamiliar to those with little experience in international investment law or investor-State disputes (for example, the jurisdictional gate imposed by Article 25(1) of the ICSID Convention).