What has the CMRAO done for you lately?
Blog Condo Adviser

The CMRAO has recently issued its yearly report covering their activities for their 2021/2022 fiscal year. In this post, we review some of the great work it has done for the industry in the last year.

Who is the CMRAO?

As some of our readers will know, the CMRAO is the Condominium Management Regulatory Authority of Ontario. Its mission is to ensure that condo managers and management providers are licensed, that they meet the education and experience requirements and that they comply with the Code of Ethics. It is a watchdog of sorts, with both a carrot (educational component) and a stick (investigatory and disciplinary powers).

The CMRAO’s Annual Report shared an interesting statistic on the geographical location of managers (which is directly linked to where condo clusters are located in the province). If you hover your cursor over each of these columns, you’ll see the precise number represented by them.

How often is the CMRAO contacted?

The CMRAO has been busy this past year with Ontarians contacting them by various means:

Complaints received by the CMRAO

The CMRAO has received 968 complaints this past year (slightly lower than the prior year).

Below is a chart showing the top 10 categories covered by these complaints. Some of our readers won’t be surprised by the categories. Most complaints pertain to decisions made by boards of directors and to a perceived lack of responsiveness. 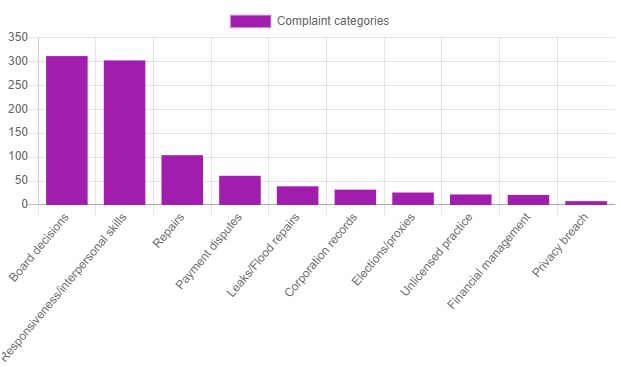 Upon receipt of a complaint, the CMRAO may do any of the following:

The chart below shows the outcome of the various complaints received.

How satisfied are Ontarian of the CMRAO?

A great statistic found in this year’s report is that 89% of those who called/emailed the CMRAO are either satisfied or very satisfied of the level of service received!

When asked whether the CMRAO was meeting its mandate, 86% agreed or strongly agreed that it did.