The Department of Justice (DOJ) recently released its annual statistical report on recoveries and new matters under the False Claims Act (FCA). The aggregate reported recovery of $2.8 billion for fiscal year (FY) 2018 is the lowest such total since FY 2009 and is 17% lower than last year’s total and less than half of FY 2014’s all-time high recovery of over $6.1 billion. As the table below shows, however, DOJ’s and private qui tam relators’ levels of enforcement activity on behalf of the Departments of Health and Human Services (HHS) and Defense (DOD) in FY 2018 remained consistent with recent trends. 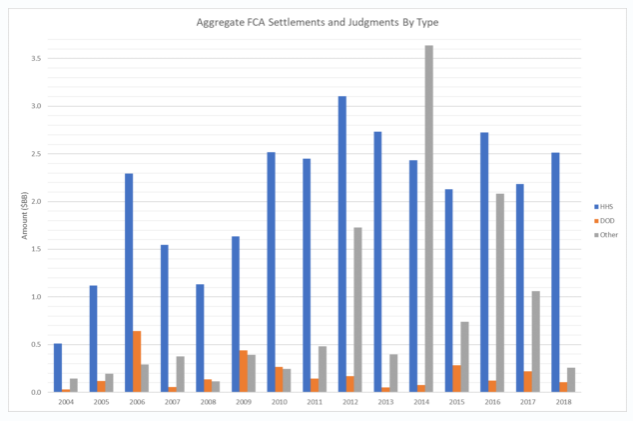 Notably, aggregate recoveries on behalf of government programs not under DOD or HHS oversight hit their lowest total since FY 2010. Just four years ago, as part of the aftermath of the subprime mortgage crisis, this “Other” category included over $3.1 billion recovered from financial institutions in connection with federally insured mortgages and loans. This past year, however, the Commissioner of the Federal Housing Administration announced that this agency would seek FCA enforcement less often, in response to a perception that such enforcement has deterred major lenders from participating in federal loan programs.

With the exception of 2014’s housing crisis crackdown, health care fraud cases have yielded a plurality share of FCA recoveries every year since FY 1996. The new matter tallies in DOJ’s latest report suggest that this trend in recoveries is unlikely to change in the immediate future. Out of 767 new referrals, investigations and suits initiated in FY 2018—many of which will continue into 2019 and beyond—58% (446 matters) took the form of qui tam actions against defendants participating in HHS programs. The tables below show the FY 2018 new matter totals compared to those reported in recent years. 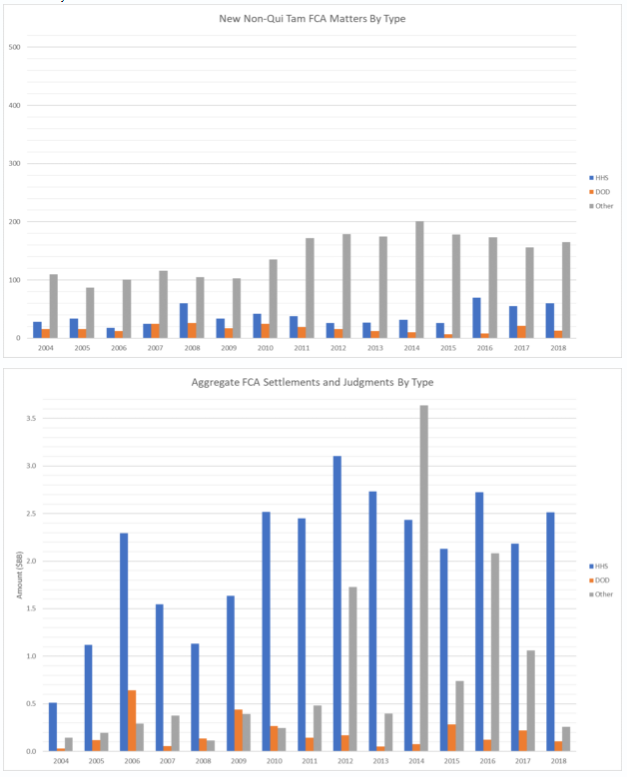 One additional curiosity: each December, DOJ not only releases aggregate figures for its most recent fiscal year of FCA enforcement, but presents those figures in tables showing recoveries and new matters by category dating back to the FCA’s legislative overhaul in 1986. As noted previously on this blog, DOJ’s annual reports sometimes contain surprising inconsistencies from year to year. DOJ acknowledged to Law360 last year that it sometimes updates prior years’ recovery totals as appeals from initial judgments work their way through the courts or as additional parties implicated in a matter reach and revise settlements. (These adjustments only partly account for the discrepancies between tables that accompanied DOJ’s FY 2017 statistical report press release in December 2017 and the update it ultimately released in January 2018.)

Adjustments to DOJ’s statistics on cases from the more distant past are harder to understand. For example, last year DOJ reported that the total amount recovered in FY 1999 from qui tam cases in which the Government had intervened was $406,761,680, but the corresponding cell in this year’s table states that figure was only $396,402,128—a drop of over $10 million in Government-recovered funds associated with one or more cases that ostensibly concluded nearly 20 years ago. More puzzling still is DOJ’s indication that it initiated 120 new matters on behalf of DOD in FY 1989 (the year one of the authors of this post was born) and 45 such matters in FY 1997. Last year’s report stated those numbers as 122 and 48, respectively. A comparison of the FY 2017 and FY 2018 reports reveals dozens of such minor inconsistencies. At least some of these discrepancies are clearly attributable to data-entry errors, but it is unclear to what extent (or to what purpose) DOJ undertakes a wholesale recalculation of its archival figures for each year’s report.

Questionable minor details aside, the high-level trends on display in the official FY 2018 FCA enforcement statistics demonstrate that health care providers and other entities doing business with the government are likely to face substantial enforcement action under the FCA once again this year.