Since 2017, several regulations and policies, as listed below, have been published by the regulatory authorities for the opening-up of the banking industry: 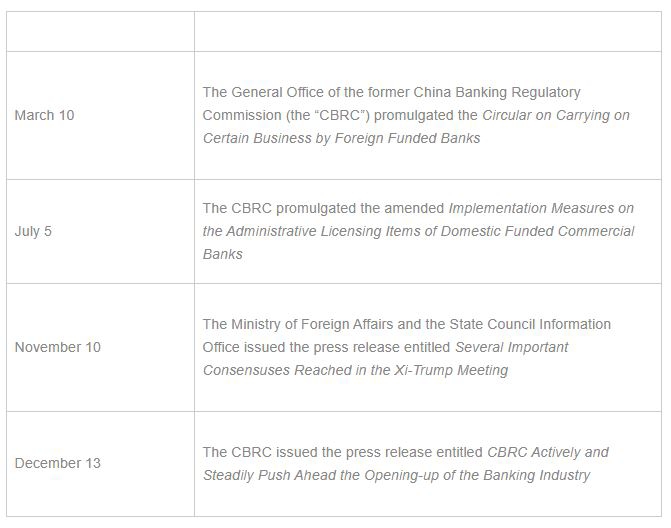 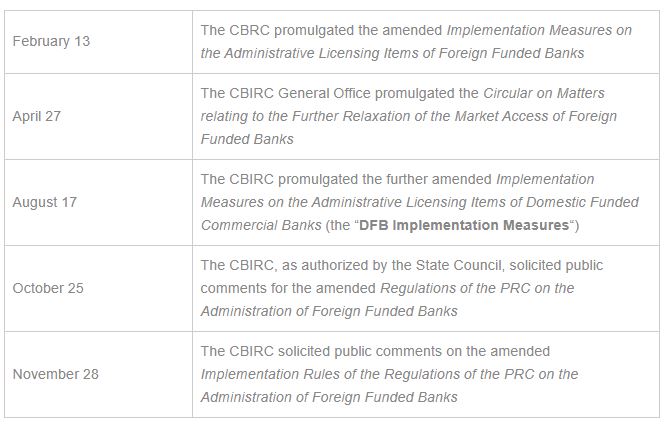 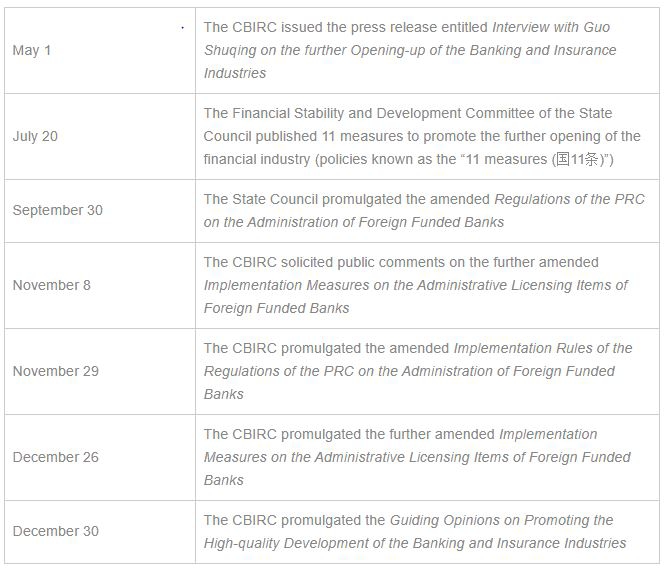 The amendments to the Implementation Measures this time focus on implementing and specifying the details of opening-up policies in the banking industry since 2017, streamlining administration and delegating powers, unifying the regulations over the domestic funded banks (the “DF Banks“) and foreign funded banks (the “FF Banks“), and reflecting the latest regulatory developments relating to anti-money laundering (“AML“) and counter-terrorist finance (“CTF“). The amendment highlights include the following aspects:

1. Implementing and specifying the details of the opening-up policies in the banking industry

(1) the sole/major Chinese shareholder of a Sino-foreign joint venture bank (the “JV Bank“) is no longer required to be a financial institution;

(2) the minimum total asset requirement imposed on the foreign shareholder of a wholly foreign owned bank (the “WFOB“) or a JV Bank is removed;

(3) the minimum total asset requirement imposed on the foreign parent bank of a foreign bank PRC branch (the “FB Branch“) is removed;

2. Unifying the regulations over the DF Banks and FF banks

In order to achieve the uniformity of the regulations over the DF Banks and FF Banks, certain qualification requirements on the Chinese shareholders of the JV Banks are further incorporated into the Implementation Measures, e.g. the profit-making requirement in respect of the latest three consecutive fiscal years and the restrictions on several financial indicators in respect of the non-financial institution shareholders. Those qualification requirements are in line with those imposed on the shareholders of DF Banks under the DFB Implementation Measures so as to fix the potential regulatory loopholes.

Meanwhile, the Implementation Measures also reflect the requirements on the legitimate source of the capital injected by the foreign shareholders into the FB LIBs and by the parent banks into the FB Branches, and the shareholding structure check in respect of the shareholders of the FB LIBs and the parent banks of the FB Branches, including checking the lists of their major shareholders, controlling person(s) and ultimate beneficial owner(s); the records of any crime committed intentionally or in gross negligence; and the lists of overseas branches and affiliates.

In addition to the above, the Implementation Measures set out the provisions, which are aligned with those prescribed in the DFB Implementation Measures in substance, relating to the establishment of the branch-level specialized departments under the FB LIBs. The branch-level specialized departments include credit card centers, small enterprise credit centers, private banking departments, bill centers, the treasury operation centers and precious metal business departments. The establishment of the above departments reflects the business risk isolation requirement recommended by the regulators in recent years.

3. Strengthening the supervision on the AML and CTF compliance

After the promulgation of the Opinions on Improving the Regulatory Systems and Mechanisms of Anti-money Laundering, Counter-terrorism Financing and Combating Tax Evasion (the “SC Letter No.84“) by the general office of the State Council, a series of measures have been promulgated by the People’s Bank of China (the “PBOC“) and the CBIRC to implement the SC Letter No.84 and strengthen the regulation of the AML and CTF compliance in the financial sector. Against this background, the Implementation Measures prescribe several requirements in relation thereto. For instance, evidencing materials of the AML and CTF compliance shall be submitted upon the application for the establishment of or conducting a new business by the FB LIBs and FB Branches. Furthermore, the AML CTF compliance training records and relevant commitment letters are added as the documents that required to be submitted for the qualification verifications of the directors and senior management personnel. These additional requirements intend to reflect the tightened and enhanced regulatory requirements on the AML and CTF compliance imposed by the PBOC and CBIRC.

In response to the trend of administration streamlining, power delegation, and business environment optimization, some approval and/or verification powers are delegated to the local CBIRC branches or sub-branches in accordance with the Implementation Measures. For example, the acceptance and approval of the qualification verification application relating to the directors and certain senior management personnel of certain FF Banks may be obtained from the local CBIRC branches or sub-branches (as the case may be).

The Implementation Measures also explicitly emphasize that the special rules applicable in the free trade zones shall prevail and reserve the room for the CBIRC to adjust the acceptance, verification and decision-making authorities of each administrative licensing item if needed. These provisions are interpreted as leaving flexibilities for the further steps on streamlining administration and delegating powers.

The amendments to the three core regulations relating to the administration of the FF Banks set out a great business environment for FF Banks to corporate and compete with the DF Banks and will, as a result, promote the stable development of the financial market.