SPEECH OF THE WEEK: STATE OF THE UNION

Safe, Strong, and Proud. President Donald Trump will deliver his first State of the Union this evening at 9 p.m. ET. The theme of the address will be on building a safe, strong, and proud America. Trump is expected to offer more details on the White House’s immigration plan, which would provide a path to citizenship for up to 1.8 million Dreamers; significantly reduce legal immigration to the U.S.; and establish a $25 billion trust fund for border security.

Infrastructure investment will be the other big topic. In a draft proposal leaked last week, the administration calls for investments by state, local, and private entities and an expansion of Private Activity Bonds, among other things, to help modernize the country’s bridges, roads, and public transit system.

As with his previous address to Congress, Trump will appeal for bipartisanship while putting pressure on lawmakers to get these two priorities done this year.

In addition, the State of the Union will give Trump an opportunity to take a victory lap for the country’s strong economic performance. Look for the president to give himself an A+ on the stock market and job creation. The president is also expected to highlight the immediate successes of the GOP’s new tax law, which have resulted in bonuses for workers and spurred domestic investments by U.S. corporations.

Consulting the Tea Leaves on Extenders. Based on conversations that McGuireWoods’ Tax Policy Update team has had with tax staffers on Capitol Hill, the hope of passing a tax extenders bill this year is still alive. It remains a top priority for both Republicans and Democrats on the Senate Finance Committee.

The question of timing is anybody’s guess. But there’s no doubt that Senate Finance Chairman Orrin Hatch’s (R-UT) Tax Extender Act of 2017 (S. 2256) will serve as the starting point of any forthcoming package. Our overview of S.2256 is available here.

Democrats are in the process of putting together a wish list, but most of what they want are already in Hatch’s bill. Because the legislative window for getting things done in an election year is small, don’t be surprised if the Senate committee foregoes a formal markup entirely and opts to negotiate a package behind closed doors instead.

Given that there’s no strong interest in getting extenders done on the House side, the Senate will likely try to move an extenders package by attaching it to a must-pass legislative vehicle (e.g., FY 2018 spending bill).

The Tax Policy Update team has picked up chatter that Republicans of the House Ways and Means Committee might end up addressing extenders in a piecemeal fashion — for example, adding a set of provisions in the forthcoming disaster relief bill and then doing another set in the FAA reauthorization bill.

What About Technical Corrections? A technical corrections bill is registering as a weak blip on the radar — it’s all talks at the moment, and prospects remain dim. Democrats have shown little interest in getting a package of fixes done this year.

Tom Barthold, chief of staff for the Joint Committee on Taxation (JCT), said that his team is still working to determine all the necessary fixes, encouraging individuals and companies to help lawmakers identify areas that require corrections or clarifications.

The new tax law is also pushing the JCT staff to consider issuing its bluebook sooner rather than later. The JCT bluebook is generally published at the end of each Congress* and provides a general explanation of all tax legislation enacted in the first and second sessions.

Based on recent statements by JCT officials, the enactment of the tax bill last year may require staff to put together a bluebook for just the first session of the 115th Congress. However, the final decision is yet to be made.

*Each Congress typically covers a two-year period and is split into two sessions. For example, the first session of the 115th Congress ended on Jan. 3, 2018.

Medical Device Tax on Suspension. The medical device industry won a two-year long campaign when a two-year suspension of the 2.3 percent tax on medical device sales was included in the Jan. 22 continuing resolution to fund the government. The tax was previously suspended in Dec. 2015 for two years and was scheduled to return in 2018. The suspension of the tax will result in billions of dollars in savings for device manufacturers. The industry has also promised that this will spur job creation, growth, and innovation.

The success of the medical device industry’s campaign is the result of a multi-million dollar effort that targeted key congressional offices. Medtronic and Abbott Laboratories, two of the largest players in this space, spent $8 million in 2017 alone on lobbying. The industry plans to continue its efforts, hoping to secure a permanent repeal of the tax.

At a Jan. 25 tax event sponsored by the District of Columbia Bar Taxation Community, Tom West, the Treasury’s tax legislative counsel, noted that urgent guidance projects include those related to:

President Donald Trump plans to nominate Charles “Chuck” Rettig to be the next commissioner of the Internal Revenue Service (IRS). If nominated and confirmed by the Senate, Rettig would serve a five-year term as head of the revenue collection agency. Rettig would replace Treasury Assistant Secretary for Tax Policy David Kautter who has served as acting IRS commissioner since November 2017, when former Commissioner John Koskinen left the agency at the end of his term.

Though White House aides have yet to comment on Rettig's potential nomination, Senate Finance Chairman Orrin Hatch (R-UT) has praised his qualifications, saying the agency needs a leader with knowledge of the tax code.

Who is Charles Rettig? Rettig is not well known in Washington’s tax policy circles. He has been a tax lawyer with the firm Hochman, Salkin, Rettig, Toscher, and Perez, P.C. for 35 years. He has built a broad practice advising U.S. taxpayers in foreign and domestic voluntary disclosures, civil tax examinations where civil penalty issues or assertions of fraudulent conduct were at issue; and defending criminal tax fraud investigations and prosecutions. During his career, Rettig has represented clients before the IRS, the Tax Division of the U.S. Department of Justice, various state taxing authorities, and in federal and state courts.

In addition to his tax practice, between 2010 and 2011, Rettig was appointed to serve as chair of the IRS Advisory Council (IRSAC). IRSAC advises the IRS on various tax administration issues, making recommendations on existing and emerging policy. IRSAC issues an annual report making various suggestions on operational improvements, best practices for IRS activities, standards for tax professionals, and procedural issues.

Given his IRSAC tenure, Rettig is a familiar name to several IRS officials who have worked with him on the council and on several tax litigation matters. Still, he is a somewhat unusual choice for commissioner. For the past two decades, after the IRS Restructuring and Reform Act of 1998, commissioners have come from the business world.

Political Ties. While Rettig is not a newcomer to Washington, he has few notable political ties. In the past, he has made campaign contributions to both Republican and Democratic candidates. That said, Rettig has generally given more to Democrats than Republicans. Sen. Brian Schatz (D-HI) has received the most from Rettig over the years — about $8,000 in total. Rettig has also donated to former Senate Finance Committee Chairman Max Baucus (D-MT) and to Sen. Kamala Harris (D-CA).

Rettig went on to caution that people might not find all the information they seek in Trump’s tax returns. He noted that an overall financial picture will not surface by simply reviewing Trump’s returns since he likely “pays taxes at a lesser rate than many of us given the nature of his real estate and similar investments being subjected to lower tax rates than salaries earned by the rest of us.” Rettig also wrote that any “maneuvering” by tax professionals to lower Trump’s tax rate is likely legal and even encouraged by the tax code.

Views on the IRS. In a departure from the GOP’s penchant for IRS-bashing, Rettig is sympathetic to Koskinen’s views on the agency, noting that certain lawmakers should consider toning down criticism of the IRS.

Rettig has outlined his views on the role the agency should play as well: “The IRS must balance service to the taxpayer community with an appropriate degree of enforcement of our nation’s tax laws.” Rettig acknowledged the IRS’s public fall from grace, noting that the agency must seek to gain taxpayer confidence. Rettig also discussed various other issues at the IRS, including tactics to keep employees motivated and the importance of preserving a deep berth of institutional knowledge to train new employees.

In his written work, Rettig also displays familiarity with the structure of the agency, noting that the IRS’s tax administration operations often depend on who commissioners appoint to management positions, including, most importantly the deputy commissioner for services and enforcement having responsibility for overseeing the four primary operating divisions of the IRS — the Wage and Investment Division, the Large Business and International Division, the Small Business/Self-Employed Division, and the Tax Exempt Governmental Entities Division. Given the importance Rettig placed on these positions, if he is appointed to serve as commissioner, this will be something to watch out for. Who Rettig chooses to fill these rules will offer clues on the future of the agency, especially amidst the GOP’s continued efforts to restructure the IRS.

Views on Koskinen. Shortly after former President Obama’s nomination of Koskinen, Rettig acknowledged that Koskinen had an uphill task ahead of him, especially given that the agency had recently been accused of targeting taxpayers for extra scrutiny based on their political ideology. Rettig wrote that based on Koskinen’s previous experiences, he would “likely perform in a politically satisfactory manner” and that “he deserves our support and respect for his willingness to assume the position of Commissioner” given the state of affairs at the agency.

An Uphill Task. Like former Commissioner Koskinen, if Rettig is confirmed, he will face an uphill battle at the IRS — albeit with less vitriol from the GOP. In addition to implementing the GOP’s tax law, he must contend with the damage caused by years of underfunding. Rettig will also have to continue the agency’s modernization efforts, implement a new cybersecurity framework, oversee the 2017 filing season, and potentially head the agency during a massive restructuring.

1. It will be a relatively tame week in Congress given that Republicans are leaving Wednesday, Jan. 31, for their three-day annual policy retreat in West Sulphur Springs, WV. Democrats will have their policy huddle next week in Cambridge, MD.

2. The CFPB has finalized its updates to the 2016 prepaid rule, which, among other things, will extend the effective date of the rule to April 2019. Read more here.

3. The Senate confirmed the Federal Reserve Governor Jerome Powell to be the next chair of the Fed in an 84-12 vote. Powell is expected to replace current Fed chair, Janet Yellen, on Feb. 3.

4. The Senate confirmed Alex Azar, 55-43, to serve as the next secretary of the Department of Health and Human Services.

5. Rep. Rodney Frelinghuysen (R-NJ), chairman of the House Appropriations Committee, said that he would not be seeking re-election in 2018.

President Trump got 99 problems, and Jay-Z became one over the weekend after the rapper made some critical remarks about the president in an interview with CNN: 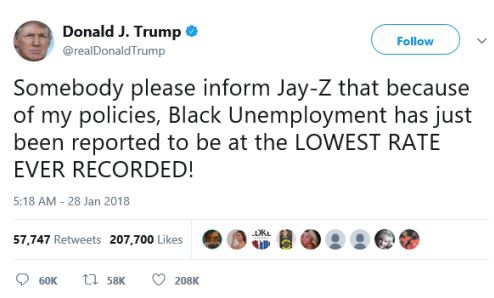 Subcommittee hearing on “Examining Opportunities and Challenges in the Financial Technology Marketplace.”

Discussion on NAFTA and the future of U.S.-Canada Relations with Canadian Foreign Minister Chrystia Freeland.