The View from the UK

There are no signs of claimants solicitors seeking to push these claims in the UK. 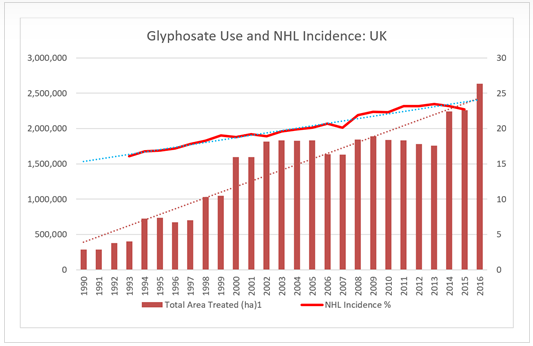 The above does not suggest a correlation or causal connection between the glyphosate use and incidence of NHL. There are many other potential factors which may cause NHL many of which are associated with an aging population. The incidence of NHL in older people has seen a marked increase over the younger cohort.

It appears that the evidence presented in the US cases has not been as comprehensive as it could be. Motions to allow only certain evidence before the jury and other strategic decisions by the opposing legal teams have a significant impact on the evidence to be considered by the jury and their ability to make a fair and balanced decision in light of all of the evidence is thus effected.

Regulatory bodies who have considered the chemical to date support the view that glyphosate is safe for use and is not likely to cause cancer in humans (at least not in the dosages generally encountered).

The claimants in the US cases allege that Monsanto knew there was a risk of cancer associated with Roundup and attempted to supress that association. Monsanto denies any such allegations.

For employer liability and public liability claims, the state of knowledge of employers and users would hold different conclusions based upon entirely different evidence and duties. It may be sustainable to suggest that until relatively recently any employer would have been entitled to rely on official government guidance regarding the safety of glyphosate. Employers ought to be taking steps to familiarise themselves with the developing scientific evidence regarding the health risks associated with exposure to glyphosate and to take the necessary steps to reduce the risk of exposure where possible.

In the UK, expert evidence will be presented to the judge and there would be a greater focus on the scientific evidence rather than reliance on emotive arguments and strategic lawyering before a jury. The UK courts have a duty to limit the expert evidence and disclosure. Careful consideration of the number and type of experts who may be required; and the nature and extent of any disclosure will need to be carefully weighed. Because of the evidential burden in UK claims, it would be an uphill struggle for a claimant to prove causation i.e. that a particular cancer was caused by specific product when such cancers are invariably multi-factorial.