Applicants should consider how including multiple embodiments in a design patent application may later impact the scope of protection.

In Advantek Mktg. v. Shanghai Walk-Long Tools [1], the US Court of Appeals for the Federal Circuit revived a patent lawsuit against a product manufacturer over the design of a pet kennel. In a precedential opinion, the court found the district court wrongly applied prosecution history estoppel in granting the defendant’s motion for judgement on the pleadings.

Advantek filed a design patent application directed to its flagship product, the “Pet Gazebo.” The application included Figures 1-4 – a kennel without a cover, and Figure 5 – the kennel of Figures 1-4 with a cover. 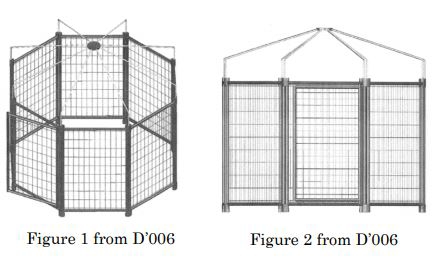 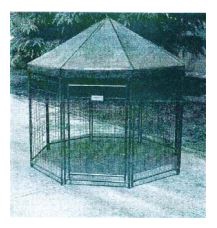 In the first action issued from the US Patent and Trademark Office, the examiner objected to the clarity of the drawings and issued a restriction requirement as between Group I (Figs. 1-4, drawn to a kennel without a cover) and Group II (Figs. 1-5 drawn to a kennel with a cover). The examiner asserted that the two groups are distinct embodiments and stated that the single claim requirement of a design patent bars the inclusion of figures having distinct combinations of elements. Advantek elected Group I, submitted clearer drawings, and withdrew Group II. The application proceeded to grant with Figure 5 being cancelled from the application.

Advantek filed a design patent infringement lawsuit in May 2016, accusing Walk-Long of copying the Pet Gazebo, and making its own kennel, the “Pet Companion.” Walk-Long is a former manufacturer of the Pet Gazebo for Advantek. 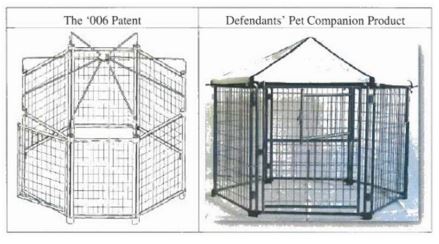 The Federal Circuit sided with Advantek and stated that regardless of whether Advantek surrendered claim scope during prosecution by cancelling the embodiment directed to a kennel with a roof, the accused product includes the particularly claimed skeletal structure and was outside the scope of the purported surrender. The Federal Circuit stated that infringement arises from the sale of a kennel embodying the patent structural design, “regardless of the extra features [i.e., the added roof].”

In an interesting aside, the Federal Circuit noted that “if the accused skeletal structure is only a component of an accused multicomponent product, Advantek would only be able to seek damages based on the value of the component, not the product as a whole.”[4]

Considerations in Light of Advantek Mktg.

Prior to prosecuting design patent applications with multiple embodiments, applicants should consider the impact that a future restriction and election may have on enforceability and recovery of damages.