Understanding the impact of the 'failure to prevent' corporate offence

The UK tax authority’s (HMRC) campaign against tax evasion has been bolstered, from 30 September 2017, by a new corporate offence of failing to prevent facilitation of tax evasion. The offence appears in Part 3 of the Criminal Finances Act 2017 which received Royal Assent in April 2017. The new offence is accompanied by HMRC guidance, which has statutory footing, on measures to prevent facilitation. Whilst commonly referred to as ‘the failure to prevent offence’ or ‘the corporate offence’, the new rules in fact provide for two offences: a UK tax evasion facilitation offence and a foreign tax evasion facilitation offence. References in this briefing to 'the offence' refers to both offences unless otherwise highlighted.

The broad scope of the offence will force organisations to focus on the defence, and the associated guidance is therefore of key importance.

Why is a new offence needed?

The offence is part of a raft of recent measures intended to deter tax evasion, including HMRC’s plans to close its last disclosure facility in 2017 (reducing the non-prosecution options for criminal conduct) and various penal measures in the Finance Act 2016 focused on offshore evasion.

Tax evasion is a predicate offence for money laundering under the Fourth Anti-Money Laundering Directive, and tax reporting under CRS and FATCA is making it harder for individuals to hide their money from the taxman. However, it remains difficult under the common law to prosecute organisations that are knowingly involved in (or turn a blind eye to) tax evasion due to the ‘directing mind’ test which (generally) requires the involvement of senior management. The new offence circumvents this requirement.

What is the offence?

The offence is loosely modelled on Bribery Act 2010, s 7. In brief, a relevant body is guilty of an offence where a person acting in the capacity of a person associated with that body commits a ‘UK tax evasion facilitation offence’ or a ‘foreign tax evasion facilitation offence’. Liability is strict and no criminal intent, knowledge or condonation by senior management is therefore required. Organisations found guilty will face an unlimited fine. There is a statutory defence where the relevant body has in place such prevention procedures as are reasonable in all the circumstances. It is an offence which applies to corporates and partnerships only, not to individuals. 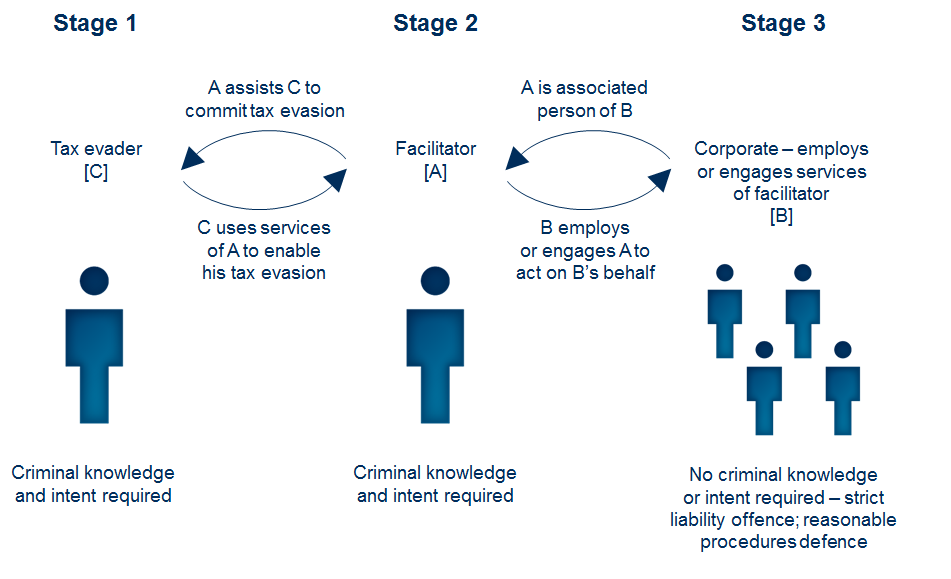 Is the offence limited to corporates incorporated or head-quartered in the UK?

No. Where there is facilitation of a UK tax evasion offence, any relevant body is in scope. Neither of the predicate offences nor the organisation’s acts or omissions need to take placein the UK.

Where there is facilitation of a foreign tax evasion offence, a relevant body is in scope if:

Which UK taxes are covered?

All taxes and duties (including National Insurance contributions). Although the new offence was originally presented as part of the package of measures tackling offshore evasion, it is much broader than that and also covers, for example, onshore VAT evasion or evasion of employment tax.

The offence hinges on the type of evasion, not the type of tax evaded. Both the tax evasion offence and the corresponding facilitation offence require criminal knowledge and intent.

Which overseas taxes are covered?

Again, all taxes are covered but dual criminality is required. Importantly, both the overseas tax evasion and the facilitation must be offences under the law of the foreign country (carried out with the necessary knowledge or intent) and under UK law. The requirement for criminal knowledge and intent at both stages will be key for organisations training their staff to spot tax evasion risks.

The guidance gives tax evasion in Germany as an example of conduct which would amount to an equivalent offence if it occurred in the UK. No examples are provided which would fall outside the scope, although the guidance suggests prosecution is unlikely in relation to extortive or discriminatory foreign taxes.

How will the offence be prosecuted?

The UK offence will be investigated by HMRC and prosecuted by the CPS or the equivalent bodies in Scotland and Northern Ireland. HMRC do not have powers to investigate foreign tax evasion, so any such cases would be investigated by the NCA or the SFO, and prosecuted by the SFO or the CPS. A prosecution for the foreign offence requires the consent of the DPP or the Director of the SFO. In practice, HMRC has indicated that deferred prosecution agreements may be a more efficient and effective enforcement strategy.

Does a tax evasion offence need to be proved?

Yes, as part of the prosecution case (and therefore to the criminal standard). However, no prosecution or conviction of the taxpayer (‘C’ in Fig. 1) is necessary. The prosecution could rely on a witness statement (and testimony) obtained as part of a Code of Practice 9 procedure or a disclosure facility. HMRC pointed out in its roadshows during the consultation period that a civil settlement for the criminal evasion of income, capital gains and inheritance taxes is far more common than prosecution. This could create evidential difficulties for a prosecutor, required to call a dishonest tax evader to give evidence of his – and others’ – activities.

Does a facilitation offence need to be proved?

Yes, to the criminal standard, although again no prosecution or conviction of the facilitator (‘A’) is necessary. The offence is framed in language familiar from both criminal and tax legislation and requires criminal knowledge or intent on the part of ‘A’, who facilitates by:

This encompasses, for example, a facilitator who devises a scheme for a taxpayer, becoming liable as a co-conspirator, or on a joint enterprise basis. However, an associated person acting in good faith who is deceived by a taxpayer, or who was negligent and foolish, would not be guilty of facilitation, and liability for ‘B’, would fall away. This area will be an evidential battleground.

How can an organisation protect itself?

Once the predicate offences have been proved (to the criminal standard), the onus shifts to the organisation to prove (to the civil standard) that it had in place reasonable procedures to prevent the facilitator from doing what it did (or that no procedures were required), taking account of all the circumstances. The guidance adopts the principle-based approach of the Bribery Act guidance. Organisations should ensure their senior management’s ‘tone from the top’ supports a culture of compliance. Policies and procedures which are clear, proportionate and effective should be implemented. Due diligence and risk-assessment are key, as is training and communication.

In practice, an organisation will have to demonstrate that it has taken a risk-based approach, document the steps it takes to compile and implement prevention procedures, and the methods it employs to test their suitability. HMRC is working with representative bodies to develop and endorse industry-specific guidance, which businesses should be aware of and also take into consideration.

Since UK tax and foreign tax are the subjects of separate offences it will be possible to have one set of prevention procedures relating to UK tax evasion facilitation and another for foreign tax. This may be important for organisations that are weighted towards one or the other.

Does the language in the proposed offence mirror Bribery Act 2010, s 7?

To a point. Key differences are that there are two predicate offences rather than one and the scope of the underlying offences covered (including the territorial application) is much broader.

Another difference is that the prevention procedures need to be ‘reasonable in all the circumstances’ rather than ‘adequate’, as in the Bribery Act. The focus is on the type of organisation in question, and what is reasonable and proportionate for it in the circumstances particular to it: its size and the nature of its business, the complexity of its operations, and the jurisdictions in which it operates.

A remaining difference is that there is no requirement in the new offence for the corporate to benefit from the actions of the associated person (a feature of the Bribery Act) which broadens scope and may make the offences easier to prosecute.

The definition of ‘person associated’ is aligned with the Bribery Act, although it remains to be seen if the interpretations will differ.

What action should be taken?

Based on an article originally published in Tax Journal on 6 May 2016 and updated following Royal Assent of the Criminal Finances Act 2017.