Securitization set to come of age in NPL resolution quest

Volumes of non-performing loans (NPLs) European banks have halved since 2015, driven by an increase in NPL sales and securitizations, according to the European Banking Authority's (EBA) report on NPLs published in November 2019.

The fall is due to increased supervisory attention, political determination and efforts by banks to enhance their NPL management capabilities, according to the EBA report on NPLs, "Progress Made and Challenges Ahead."

An analysis of this report and the July 2016 EBA report, "Dynamics And Drivers of Non-Performing Exposures in the EU Banking Sector", reveal the progress that has been made over the past three years towards providing the EU with a secondary market for NPLs and sharing of NPL risk with the private sector.

In a press release of August 2019, the European Central Bank (ECB) also reported that the volumes of NPLs held by significant institutions have fallen by almost 50 percent since November 2014. The volumes stood at €587 billion by the end of March 2019, from approximately a trillion euros reported in November 2014.

Although reductions are reported across the EU, the distribution of NPLs remains uneven (ranging from 36 percent in Greece to less than 1 percent in Sweden). Lending segments such as SMEs, CREs and consumer credit remain riskiest, although they have reportedly shown great improvements. Recent IFRS 9 data has also indicated better asset quality for both on-balance-sheet and off-balance-sheet items. 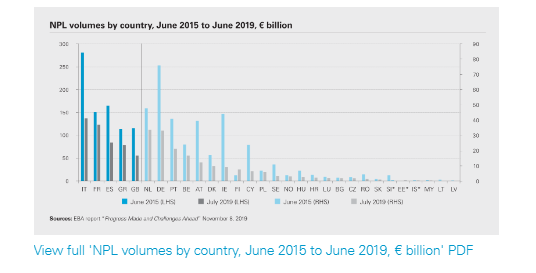 Regulatory activities can be divided into two phases: developments that have already helped reduce the stocks of NPLs in the EU, and the work that is currently underway to equip the market with stronger resolution tools and resilience.

The legislators and the regulatory authorities are still working towards a more sustainable and resilient banking sector despite the progress made in the aftermath of the 2008 financial crisis.

In July 2017, the Council of the EU announced an "action plan" to deal with NPLs in Europe. The plan outlined policy actions and invited the various European institutions to take appropriate measures to specifically address the high stock of NPLs in the EU and restrict their emergence in the future.

On the one hand, the ECB has prescribed higher provisions for NPLs, making it more expensive for banks to hold them, and, on the other, a framework is being developed to incentivize banks to offload NPLs.

Some European countries are already working with systemic solutions. In 2016, the Italian government introduced the Garanzia sulla Cartolarizzazione delle Sofferenze (GACS) scheme, which facilitated the secondary market for NPLs held by Italian banks, by offering a public guarantee to the senior, low-risk notes, and thereby increased the creditworthiness of the senior tranches. The scheme has incentivized banks to sell NPLs in the Italian market and, reportedly, with sales in gross book value of approximately €123 billion, Italy has been the most active market for NPLs in Europe.

Greece has also been the subject of scrutiny from European regulators and stakeholders alike. While the decrease of NPL ratios in Greece is not impressive, NPL volumes of Greek banks have fallen by €35 billion or 30 percent.

Greece has shown considerable improvement in the past two years, with increased reliance on securitization as a tool for NPL resolution. Securitization has proved to be efficient in markets with high levels of NPLs because it provides legal certainty, adequate investor protection and a lower cost of funding. With further developments such as the GACS-like asset protection scheme "Hercules" and further regulatory reforms in the pipeline at the Union level, Greece is attracting investor interest as its banks tidy up their balance sheets.

One of the key impediments to NPL resolution is information asymmetry. The EBA is looking to address this by proposing standardised data templates for secondary market transactions in NPLs. This will not only impart more transparency to the markets with comparable and standardized data but also instill investor confidence in NPL securitization as a stable product.

The EBA has recently published an opinion paper for the European Commission's consideration on the regulatory treatment of nonperforming exposures: the EBA Opinion on the Regulatory Treatment of NPE Securitizations dated 23 October 2019 (EBA-Op-2019-13). In addition to the policy issues already under consideration at the Union level, most pertinent roadblocks in further resolution of NPLs are member state-specific, like an inefficient legal framework and the lack of a market for NPLs. 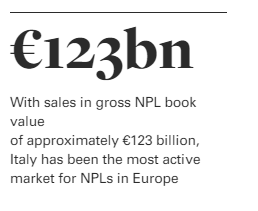 Impediments in the regulatory framework and restorative recommendations

In response to feedback received from the relevant market players, the EBA also proposes that investor institutions be allowed to apply a 100 percent risk weight cap for securitizations where the originator was permitted to apply the same, and the NRPPD is at least equal to or larger than the specific credit risk adjustments made by the originator.

In addition to the impediments under the capital requirement regime implemented by the Regulation (EU) No. 575/2013 of the European Parliament, and of the Council of 26 June 2013 on Prudential Requirements for Credit Institutions and Investment Firms (CRR), the EBA opinion paper assesses how the new securitization framework that came into force in January 2019 and introduced rules for issuing simple, transparent and standardized transactions can hinder NPL securitization transactions.

The underpinning assumption of the Securitization Regulation is evident with the prescription of due diligence on the credit-granting requirements. It also draws the Commission's attention to another set of constraints related to the determination of the retention amount based on "nominal values" of the underlying assets (again disregarding NRPPD) and exclusion of an independent servicer from the parties that may enable compliance with the retention requirements.

While the EBA opinion paper is a big step in the direction of adapting the prevailing regulatory regime for NPL securitization transactions, it will be some time before the recommendations become law. The proposal for a Directive of the European Parliament and of the Council on Credit Servicers, Credit Purchasers and the Recovery of Collateral has been subject to lengthy debate with contrasting views of the Council and the Parliament over more than one aspect.

The market may have revived, but the non-performing exposures traded through securitization remain small compared to bilateral sales. Also, NPL securitization has been more favorable in Member States that have extended auxiliary aids through other policy measures such as GACS. Stakeholders should take advantage of the current favorable market conditions—positive economic growth, prevailing lower interest rates and the decreasing unemployment. The reported declining numbers and the tenacious policy measures in this regard in the recent past are reassuring for both the banks holding the NPLs but looking to offload them, and those that regard distressed assets as a rewarding investment opportunity. We expect 2020 to be a promising year for the NPL securitization market as a tool for cleaning up European banks' balance sheets and for the development of a secondary securitization distribution channel for distressed assets. 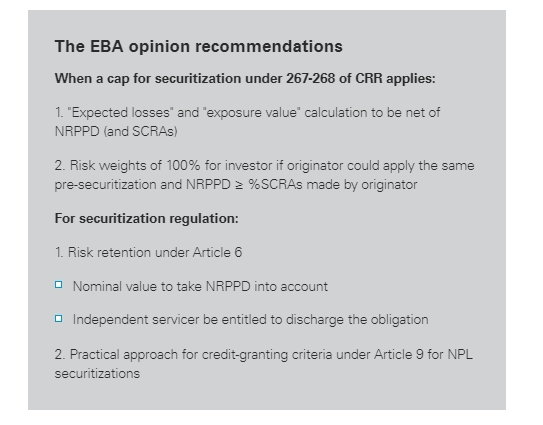