A New Dawn: Key Takeaways from The ODPC’s Final Report

The Data Protection Commission (“DPC”) recently published its “Final Report” (the “Report”). Rather than being the last such report we will see, the Report draws a line under the pre-GDPR data protection regime (relating only to the period from 1 January to 24 May 2018) and brings to a close 30 years of the “ODPC”, heralding the new era of the DPC and the increased powers and responsibilities it now bears.[1]

As is unsurprising, much of the content of the Report relates to the preparatory work undertaken by the DPC in advance of 25 May 2018. This work was not just internal to the DPC itself – as is clear from Helen Dixon’s introduction, the DPC was very proactive in helping both organisations and the public to prepare for the GDPR through consultations, awareness-raising and, as a specific example, visiting San Francisco and the Bay Area to meet companies seeking to comply with GDPR in order to understand their concerns and priorities.

A clear priority for the DPC during the period covered by this Report was its internal “GDPR Readiness Programme”, intended to prepare the office to deliver the range of new and expanded functions as a regulator under the GDPR, the Data Protection Act 2018 (the “2018 Act”) and other, related new and future laws. In total, 28 different workstreams focused on each aspect of the DPC’s operations, with the Programme entering its “Implementation Phase” in the run-up to the commencement of the GDPR.

Although it is more difficult to make a direct comparison with previous, full-year reports, the scale of communications with the DPC (and the consequent workload of the office) is not what one might have expected. There were 1,249 complaints received by the ODPC in the period to 24 May 2018, broadly in line with the 2,642 complaints lodged with the ODPC in 2017 and running contrary to previous trends of year-on-year increases in complaints. However, this can likely be explained by a preference amongst data subjects to wait until the GDPR’s introduction before exercising their strengthened rights under the more onerous new legislation.

Nonetheless, examining a breakdown of the nature of the complaints is worthwhile: 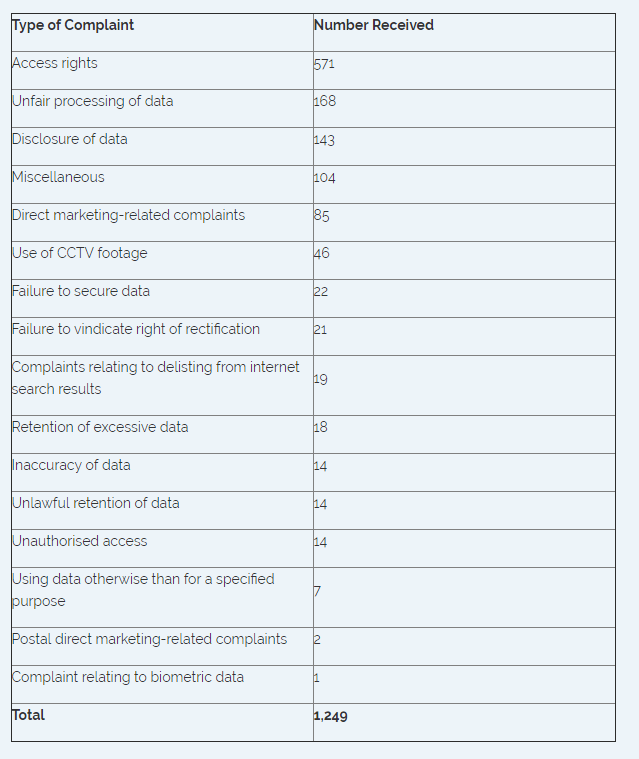 Generally speaking, the breakdown reflects previous years; however, a large increase in the number of “miscellaneous” complaints (only 17 complaints were categorised as such in all of 2017) could reflect either a deeper knowledge of the intricacies of data protection rights amongst the general public or, alternatively, simply a different categorisation approach being taken by the DPC.

1,198 valid data security breaches were recorded in the period, compared with 2,795 in 2017. This may reflect the fact that a complaint, if made before the commencement of the 2018 Act, would have been subject to the old legislation and so the preference amongst knowledgeable data subjects may have been to wait until post-GDPR. Nonetheless, any contravention of the old legislation would also be subject to that legislation rather than GDPR; as a result, any contravention leading to a complaint would not fall under GDPR irrespective of when the complaint was made.

A total of 16 technology-related data breaches were investigated by the DPC’s dedicated Technical Audit Team. How these breaches came about will be of particular interest to anyone, corporate or otherwise, concerned with cybersecurity. According to the Report, technology breaches involved:

This, and the DPC’s advice for controllers utilising cloud-based services or software to limit their exposure to potential breaches at page 19, should be reviewed and considered by all stakeholders.

In 2017, the DPC opened files on the processing of patient data within hospitals. This investigation has now been completed and the resulting report has been provided to every hospital in the state.[2] Similarly, the 59 findings of an investigation into the protection of child data in child protection cases were presented to TUSLA in January of this year.

Notably, the investigations into the activities of private investigators and their use of personal data (commenced in 2016) and the maligned Public Services Card are ongoing. Based on the Report no new investigations were commenced in this period, likely with a view to proceeding under the impending GDPR-based regimes.

The Report notes that the DPC successfully concluded a number of District Court prosecutions arising from complaints regarding direct marketing and investigated a further 41 new complaints. Interestingly, the number of general consultation queries received by the DPC was 503, mirroring the numbers received in the whole of 2017, demonstrating an increasing willingness (and preference?) amongst organisations to engage with the DPC prior to making significant decisions on matters relating to data protection.

As ever, the Report includes detailed case studies on a number of the complaints received and handled by the DPC during the relevant period. These case studies are often instructive, providing guidance on particular issues and offering assistance to sectors and businesses similar to those covered in the case studies. Although detail on the case studies is not possible in this note, notable are the accounts of responses to access requests made to both Eir and NAMA, and the outcome of AA Ireland’s unsolicited marketing communications to a particular customer.

23 audits/inspections were carried out, and, as with the case studies, the full list of audited organisations is included with the Report by way of appendix.

Helpfully, the Report summarises certain themes revealed by these audits:

In our Insight on last year’s ODPC report[3], we noted that the report addressed interactions with prominent technology and social media companies and that it demonstrated the somewhat “uneasy” relationship between the parties. This is once again considered in the Report, with the DPC noting that preparatory work was undertaken to prepare the office to assume its role of Lead Supervisory Authority for those multinational companies who have their “main establishment” in Ireland under the GDPR’s “one-stop-shop” model.

Interestingly, the Report goes on to note that its engagement with technology-based multinationals achieved “some significant results”, with a number of them noted as having altered and updated their approach to GDPR compliance and re-presenting their proposals to the DPC over the course of the period covered by the Report. The extent to which this represents a general “meeting of the minds” between these technology behemoths and their lead regulator on data protection strategy and interpretation remains, however, doubtful.

One of the key ongoing items on the agenda of the DPC, and that of all stakeholders in the European and international data protection field, is the DPC’s High Court litigation seeking a reference to the CJEU on the validity of Standard Contractual Clauses for transferring personal data internationally (and, in particular, to the USA). Further developments on this matter are imminent and the potential future impact on exporters of data from Europe could be extremely significant.

A process of consultation around a GDPR-term regulatory strategy for the DPC will be introduced before the end of the first quarter of 2019 that will provide “sustainable and transparent underpinning for what are inevitable resource deployment options and choices” and which, according to the DPC, is intended to provide an element of certainty to organisations and the public in relation to the DPC’s role and how that role will be implemented. This seems intended to publicly clarify the DPC’s purpose, powers and priorities in view of the increased attention and scrutiny the office now receives.

In conjunction with the Office of the Ombudsman for Children, the DPC will also be running a consultation on exercise of rights by, and specific data protection safeguards appropriate to, children under the GDPR. This consultation will lead to the development of a code of conduct in line with Section 32 of the 2018 Act and Article 40 of the GDPR. This will be of particular interest given the eleventh-hour amendment to the Irish Data Protection Act 2018 increasing the age of digital consent to 16 from the proposed 13 and in view of the recent revival of the proposal to introduce a “Digital Safety Commissioner” in Ireland, a matter which is to be prioritised by the Oireachtas Committee on Communications.[4]

It is also clear that significant structural changes to the operation of the DPC are ongoing. The revamped website is yet to go live (although, according to the Commissioner at the PDP Data Protection Compliance Conference, the launch is imminent), national and international case and information software is being implemented and there is ongoing recruitment and training in an attempt to equip the DPC with the suitably qualified and trained personnel it requires to meet its increased workload.

The DPC, in its current form, would be unrecognisable to the first Data Protection Commissioner when he took the role, located as it was above a convenience store in Portlaoise. Similarly, the centrality of data to the modern global economy, and the vital position held by the Irish DPC in the context of the protection of the data of all European residents, may not have been envisaged by him in 1988. This Report is the bridge between the old and the new regimes and its content demonstrates, not that it was necessary, that the first five months of 2018 represented the key preparation (and anticipation) period for the GDPR’s introduction. Preparation, and anticipation, has continued and must continue into 2019 and beyond.

The added benefit of data mapping