Voltaren: Is it possible to differentially market the same product and comply with the Australian Consumer Law?

Voltaren is a gel used to treat both local pain from sprains and inflammatory rheumatism. That is, the same product is used to treat two entirely different conditions.

The marketers at GSK (previously, Novartis) came up with a great idea to increase sales – split Voltaren into two products by using different packaging – one for the general local pain market, the other for the osteoarthritis market (that is, to differentially market).

But they overlooked the Australian Consumer Law, and their packaging attracted the unwelcome attention of the ‘national consumer champion’, the ACCC.

The Products and the Packaging

Novartis first sold Emulgel in about 2000. In about 2010, Novartis began selling Osteo Gel.

Both products were registered on the Australian Register of Therapeutic Goods (ARTG) with the same therapeutic claims (pharmacodynamics):

In inflammation and pain of traumatic or rheumatic origin, Voltaren Emulgel and Voltaren Osteo Gel has been shown to relieve pain, reduce oedema, and shorten the time to return of normal function.

Both products contained the same formulation: diclofenac diethylammonium as their active ingredient at an identical dose level of 11.6 milligrams per gram.

GSK differentiated the Osteo Gel tube from the Emulgel tube with a triangular blue cap designed to be easy to open by a person with osteoarthritis in the hands (Emulgel had a white round cap); and a directed use of up to three weeks at a time (Emulgel use was up to two weeks at a time). It sold Osteo Gel at a higher price.

The Osteo Gel packaging was also different. It claimed: For the temporary relief of local pain and inflammation associated with mild forms of osteoarthritis of the knees and fingers; and had an x-ray style image of a knee joint with redness signalling inflammation between the femur and tibia to reinforce the impact of the claim that it was suitable for treating osteoarthritis of the knee.

From mid-November 2014, the words: associated with mild forms of osteoarthritis of the knees and fingers were removed from the packaging for Emulgel, to emphasise its general use.

The objective was to increase market share of Osteo Gel, without cannibalising sales of Emulgel, by emphasising the osteoarthritis treatment.

The Court accepted that the products were directed at two different “pain states”:

Emulgel was marketed to “the young (or young-at-heart) “weekend warriors” with sports injuries or strains want[ing] pain relief”; and

Osteo Gel was marketed to “those with more years behind them but still “forever young” who suffer from pain associated with osteoarthritis”.

(with those in either not necessarily appreciating being grouped with the other!)

The ACCC alleged that GSK had contravened the Australian Consumer Law because the Osteo Gel packaging, in the context of the Emulgel packaging and via two websites:

In these proceedings, GSK admitted that up to March 2017, its packaging contravened the ACL because:

The dominant message and thus overall effect [of the packaging of the Osteo Gel] product was … [that it was] specifically formulated to treat, and solely or specifically treats, local pain and inflammation associated with mild forms of osteoarthritis of the knees and fingers, and is more effective than Emulgel at treating those conditions. … the increase in price for the same or similar sized tubes would reinforce, rather than create, that effect. [judgment, paragraph 80]

Was the Osteo Gel packaging misleading after it was revised?

The dispute in these proceedings concerned the revised packaging of Osteo Gel from March 2017 when the words “Same effective formula as Voltaren Emulgel” were added prominently above the active ingredient. See the image below.

If the revised packaging created the overall impression that Osteo Gel was suitable for use in treating a specific condition (osteoarthritis) then it was not misleading under the ACL.

But if the revised packaging created the impression that Osteo Gel was specifically formulated for such a condition then it was misleading under the ACL.

This is what the Court found:

86   An average, sensible consumer with osteoarthritis … might have questioned what the difference was between Emulgel and Osteo Gel. Upon reading the additional words on the Osteo Gel packaging, which were, only just, sufficiently clear and prominent, they most likely would have realised that the gel in each was the same, or at least that there was no material difference between the formula for Emulgel and the formula for Osteo Gel. They would have had clear information that Osteo Gel did treat osteoarthritis, a claim that was not made for Emulgel. They would have had the treatment duration information for osteoarthritis, with a longer maximum period of use; and they would have been aware that the cap would be easier to open. [judgment, paragraph 85]

In May 2018, the sale of Osteo Gel in this form was discontinued by GSK. The revised packaging had been an interim measure to allow the product to be sold until GSK obtained ARTG registration for a new formulation: Voltaren Osteo Gel 12 Hourly – with twice the concentration of the active ingredient, diclofenac, in its formulation.

In the light of the finding that only the pre March 2017 packaging contravened the ACL, that GSK had admitted its contravention, and that Osteo Gel is no longer sold in that form, the Court took the view that injunctions, publication orders or compliance orders are not appropriate. It will determine the pecuniary penalties for the contravening conduct at a later hearing.

How did the Osteo Gel case differ from the Nurofen case?

The Court accepted that the differential marketing for Osteo Gel was that each product was marketed as suitable for, as opposed to marketed as formulated for, a specific “pain state”.

Justice Bromwich made these observations about the Nurofen differential marketing:

the Nurofen case did not involve any genuine attempt at differential marketing, as opposed to flagrant deception. This case, even for the admitted contraventions, is in a different category. [paragraph 76]

The key to the Nurofen decision was the use of the word “targeted” which gave the impression of a specific formulation. For more insights, click my article How the Nurofen Specific Pain Range marketing strategy was undone as misleading by the ACCC 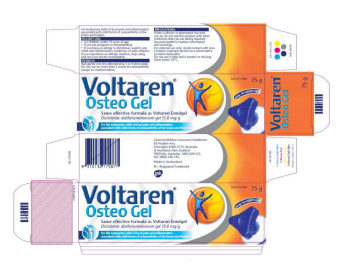