On September 20, 2021, the World Intellectual Property Organization (WIPO) released Global Innovation Index 2021 (hereinafter referred to as “the GII”). China ranked 12th, up 2 places from 2020, topping middle-income economies and surpassing developed economies such as Japan, Israel and Canada. Switzerland topped the list for the 11th consecutive year, with Sweden, the United States, the United Kingdom and South Korea ranking second to fifth respectively. South Korea ranks fifth in 2021 from tenth in 2020, with an obvious upward trend. The middle-income economies such as Turkey (41st), Vietnam (44th) and India (46th) have risen significantly in the past 10 years and are changing the global innovation landscape. 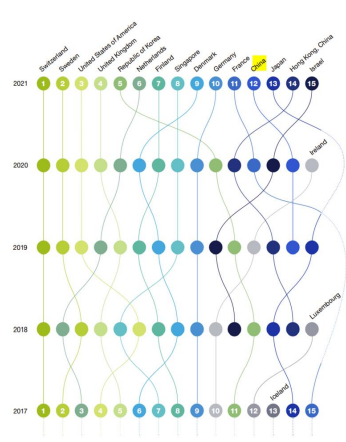 Since 2013, China's global innovation index ranking has risen steadily for 9 consecutive years, with a strong upward momentum. From the indicators of innovation inputs, China is a global leader in the indicators of “Trade, diversification, and market scale” and “knowledge workers”. From the indicators of creative outputs, China's strengths are concentrated in intangible assets, knowledge creation and knowledge impact. Among these, China’s levels of patents, trademark and industrial designs by origin, scaled by GDP, and the percentage of creative product exports in total trade have achieved global leadership.

In the global "Top science and technology (S&T) cluster" ranking, Tokyo–Yokohama region of Japan, Shenzhen–Hong Kong–Guangzhou region of China, Beijing, Seoul and San Jose-San Francisco region of the United States are the top five. Compared with last year, the ranking of Shenzhen–Hong Kong–Guangzhou (No.2) remained unchanged, while the ranking of Beijing (No.3), Shanghai (No.8), Nanjing (No.18) and Hangzhou (No. 21) increased significantly.

Since the release of the GII report in 2007, it has become a wind vane to measure innovation and the cornerstone for governments to make economic decisions. More and more governments systematically analyze their annual selection results and formulate countermeasures to improve their performance.