Over the past decade there has been a notable increase in the number of class actions brought against manufacturers of food and consumer packaged goods, specifically with respect to allegations of false claims in advertising and product labeling. In such cases, plaintiffs typically allege that consumers were harmed because they paid higher prices than they would have paid had they possessed complete information.

Plaintiffs experts have frequently proposed conjoint survey analysis as a method that can be used to determine the price premium consumers allegedly paid as a result of the false claims. Based on the theory that a product is the combination of multiple individual attributes, conjoint analysis is a survey-based technique that can help measure respondents' stated preferences for those attributes.

Survey participants are asked to choose between products with varying combinations of features, including price. If designed and implemented properly, the analysis can potentially help determine respondents' perceived preferences for individual product features — including, presumably, the falsely advertised feature.

In a recent ruling in MacDougall v. American Honda Motor Co., the U.S. Court of Appeals for the Ninth Circuit reversed the U.S. District Court for the Central District of California's exclusion of a plaintiffs expert's report that relied on a conjoint survey to determine price premium damages. The district court's rationale for excluding the plaintiffs expert's report was that it "calculates an inflated measure of damages, because it does not adequately account for supply-side considerations."

This difference in opinion is emblematic of a wider debate surrounding conjoint analysis, as various courts have ruled differently on its suitability for damage estimation. This article provides an analysis of the economic issues at the heart of this debate.

The Framework for Price Premium Damages

In order to satisfy the Comcast standard, plaintiffs arguing a price premium theory of liability in false advertising matters must establish that damages stem from the increase in price resulting from the alleged false claims. Consequently, the plaintiffs' model must calculate harm equal to the difference between the price the plaintiffs paid, and the price they would have paid in a hypothetical world in which the defendant had not made the false claims — the "but-for" world.

More generally, the damage model must calculate the difference between the plaintiffs' actual economic circumstances and their economic circumstances in the but-for world. Because prices, and quantities, are the consequence of the interaction of supply and demand, a reliable damages method would have to be able to determine how both demand and supply would have been different in the counterfactual or but-for world.

Figure 1 below illustrates a stylized example of the interaction between supply and demand resulting in a market equilibrium. The grey line representing consumer demand is constructed by aggregating consumers' willingness to pay, and is typically downward-sloping.

The orange line, representing supply, is upward-sloping when marginal costs are assumed to increase with quantity supplied. In this example, at equilibrium, quantity sold equals six units, and price equals $5 per unit. For clarity, we assume that each of six consumers, labeled A to F, purchases a single unit at the equilibrium price of $5.

The figure also shows consumer demand in a hypothetical scenario in which the alleged misrepresentations are removed from the product labels — the blue line. In this example, we assume that when the product is sold without the alleged misrepresentations, there is a downward shift in consumer demand, with consumers demanding lower aggregate quantities at each price level.

The market finds equilibrium at this lower level of demand — the but-for market equilibrium — at a quantity equal to four units, and a price equal to $4. In the but-for world, only four consumers — A, B, C and D — would continue to purchase the product. 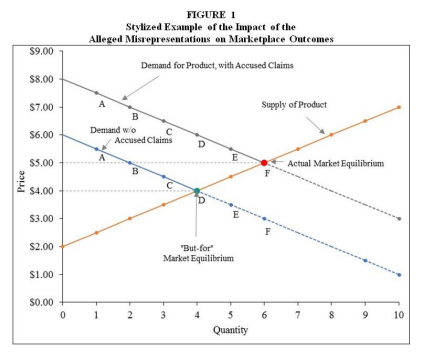 Damages for the other two consumers — E and F — are not clear in this scenario, since their willingness to pay for the product in the but-for world is less than the market price of $4, and therefore they would not have purchased it. Those consumers' damages would depend on their actions in the but-for world, which in turn would depend on their preferences and the alternatives available to them.

Knowing what the supply curve looks like for the product at issue is critical, because but-for prices and quantities could substantially differ depending on the market realities of supply. For instance, consider the scenario in which the defendant had a "line pricing" policy, per which it sold a line of similar products at a fixed price point, regardless of the specific claims or even other minor differences.

Under this policy, it would sell the product without the alleged false claims at the same price of $5 as it did with the claims. Figure 2 illustrates this scenario with a horizontal line representing supply. A horizontal supply curve can also be the result of a constant marginal cost of production. 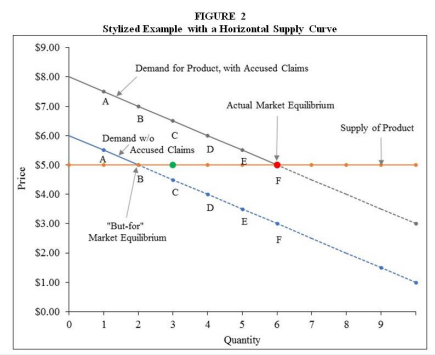 The above examples illustrate the fundamental economic principle that demand is only one of the two major elements of the market equation, and without an analysis of supply, it isn't possible to determine market prices. A survey, conjoint or any other, would at best only be able to provide information on the respondents' willingness to pay for a particular product feature, but that information is insufficient to lead the economist to the price consumers would actually have paid.

In response to this fundamental problem, plaintiffs experts have, in some cases, gone further, and argued that damages can be calculated without having to determine the true but-for price — and that the supply side is, in fact, irrelevant to determining damages in false advertising matters. They have argued that to fully compensate all consumers, one must fix the number of but-for units sold to equal the actual number of units sold, thus effectively foregoing any examination of the supply side.

In these cases, plaintiffs have then argued that some measure of the difference between consumers' average willingness to pay for the product with and without the false claim — obtained from the survey — can be multiplied by the artificially fixed unit sales to obtain aggregate damages. In the above example, this would mean plaintiffs could fix but-for quantity at six units, and simply determine that the vertical decline in the marginal consumer's demand — $2 in this example — is the price premium across all six customers, as shown in Figure 3.

Multiplying this so-called price premium by six units, they would obtain an estimate of aggregate damages equal to $12. The plaintiffs' arbitrary requirement of fixing units sold results in the examination of an imaginary scenario that would never occur. In the above example, the scenario of six units sold at a price of $3 could simply not occur, given the nature of demand — both with and without the alleged misrepresentations — and supply. 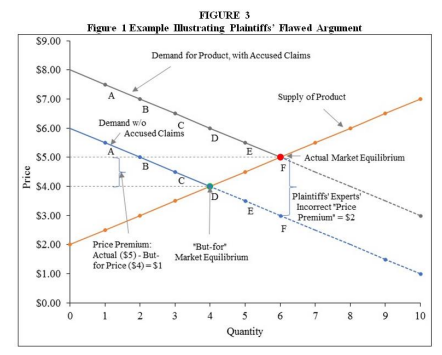 The rationale that plaintiffs experts have sometimes given, in these cases, for fixing the number of units sold is that this is in keeping with the notion that experts hold all else constant besides the factor giving rise to liability. This approach misinterprets the compensatory goal of tort damages, which is to make the plaintiff whole or restore them to their economic position absent the harmful act.

While it is correct that the expert must isolate the impact of the accused act from unrelated events, such as a recession or other market events not stemming from the accused act, the expert must account for all changes in the plaintiff's economic environment that are caused directly by the accused act. If the alleged act caused the quantity of sales to be different from what otherwise would have occurred, then that fact must be addressed in an assessment of damages.

In some cases, plaintiffs have claimed that they can use realistic market prices and add them on to the conjoint analysis to account for the method's inability to consider the supply side. However, actual market prices, no matter how accurately represented, do not provide information about the but-for world, because the feature at issue was always present in those transactions. An analysis of supply and demand for the product without the feature is unavoidable, if one is to establish what the price and quantities would have been but for the alleged false claims.

Plaintiffs' claims in these cases stand in stark contrast to the approaches now deemed acceptable in other types of litigation, such as antitrust or patent infringement, where potential differences in quantity between the actual and but-for worlds are an integral part of the analysis. Consider the context of patent infringement, for instance, where infringement may have reduced the patent holder's sales — but may also have lowered market prices and expanded the total market.

In the case of false advertising — as seen in the above examples — both price and quantity may be lower in the but-for world relative to the actual world with the false claims, as some consumers, possessing full information, may seek alternatives in the marketplace, or not make a purchase at all.

In fact, the named plaintiffs in such class actions often allege specifically that they would not have purchased the accused product at any price if they had known about the mislabeling. By fixing the butfor quantity at an arbitrary level, the expert ignores aspects of consumer behavior in the but-for world.

In defense of their proposed use of conjoint analysis as a stand-alone damages method, plaintiffs experts have asserted that the harm from false advertising is somehow inherently different from harm in all other types of litigation — like antitrust, patent infringement and breach of contract — where courts expect the expert to consider the impact of the wrongful act in its entirety. For the above reasons, the use of conjoint analysis as a stand-alone damages methodology in the false advertising context is likely to continue to be challenged in courts.