According to the latest Queen Mary University of London International Arbitration Survey released on 9 May, the Singapore International Arbitration Centre is the most preferred arbitral institution in Asia, and ranks third of the top five arbitral institutions in the world. In addition, Singapore was ranked as the most preferred seat in Asia. These rankings show that Singapore and SIAC continue to make strong headway as preferred venues for resolving international disputes—a trend that is expected to continue.

The results of the survey are supported by statistics published in the 2017 SIAC Annual Report. The Annual Report provides various statistics for cases filed in the preceding calendar year, including the number of new cases filed; total, highest, and average sum in dispute; and nationality and industry sectors of the parties.

Comparison of Key Statistics by Year

The information published in the SIAC annual reports (2014–2017) is summarised below:

Number and Value of New Case Filings (US dollars) 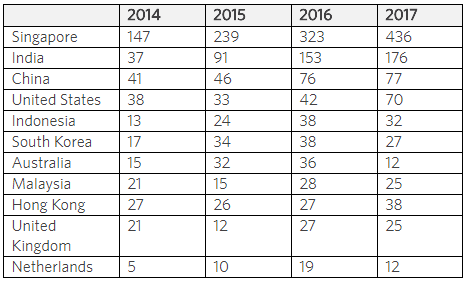 The published statistics and the Queen Mary University of London International Arbitration Survey rankings show that Singapore and SIAC continue to make strong headway as the preferred seat and forum for resolving international disputes. This trend is expected to continue as, armed with the SIAC Rules 2016, parties to SIAC arbitrations have a greater assortment of tools at their disposal to ensure the advancement of arbitrations in a fair, efficient, and cost-effective manner.