The Supreme Court clearly put forward criteria of amendments to Markush-type claims in the retrial, which has a significant influence on chemical patent cases.

The Markush-type claims defined by the Chinese Patent Law are claims that define a plurality of side-by-side alternative elements in one claim. In the art of chemistry, homologues, homogeneous atoms, isomers, and the like can generally be classified into the same "genus", and compounds having the same "genus" generally have the same/similar chemical properties. For example, replacing Cl in some compound A (R-Cl) with F yields a compound B (R-F). Under most circumstances, the compound A and the compound B have approximate structures and properties. If the inventor discloses the compound A, those skilled in the art would obviously conceive of the compound B, in this case, the inventor is allowed to incorporate the compound B into the protection scope of the claims thereof when applying for patent protection, this is the origin of the Markush-type claims. In short, in the art of chemistry, such a unique drafting manner of the Markush-type claims enables the applicant to summarize a large number of specific compounds having similar structures and properties using a form of chemical formula, so as to obtain a broad scope of protection, which also enables the Markush-type claims to have a decisive position.

In practice, Patent Reexamination Board and Court of First Instance (including Beijing No. 1 Intermediate People's Court and Beijing Intellectual Property Court, patent reexamination and invalid administrative proceedings are currently changed under the jurisdiction of Beijing Intellectual Property Court) prefer the viewpoint of "overall technical solution", while the Beijing Higher people's Court prefers the viewpoint of "technical solutions in parallel", the adjudication organs have conflict viewpoints and cause an enormous controversy in the entire procedure for announcement of invalidation and subsequent administrative remedies, leading to repeated trial results of a plurality of cases, as a result, litigation burden and costs for the parties are virtually increased.

In December, 2017, the Supreme People's Court finally decided in the retrial case “(2016) Supreme Law Xing Zai No. 41” criteria of amendments to Markush-type claims in invalidation cases, thereby bringing the controversy to an end for over a decade and addressing the major problem that cases are involved in protracted judicial proceedings as judicial organs have inconsistent viewpoints.

It is worth mentioning that the retrial case was reviewed by the Supreme People's Court and after repeated considerations and investigations, it took three years to make the final decision, in which its cautiousness was embodied. Let's discuss such an important historic case.

The (2016) Supreme Law Xing Zai Decision No. 41 refers to a patent for invention entitled "Process for Preparing Pharmaceutical Composition for Treatment or Prevention of Hypertension" filed by Daiichi Sankyo Company, Limited with patent No. 97126347.7. The claims of this patent the grant of which has been announced are provided as follows: 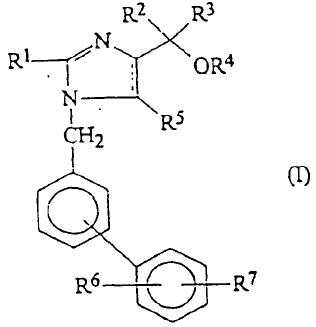 The Reexamination Board accepted the amendment that the wordings “or ester” in claim 1 were deleted, but believed that the rest of the amendments did not conform to the relevant provisions of Article 68 of the Implementing Regulations of the Chinese Patent Law, and therefore the amended text cannot be accepted. In the end, the patentee made it clear that the wordings “ester thereof” were only deleted in claim 1, and the Reexamination Board made the Invalidation Decision based on the text.

The Court of First Instance (Beijing No. 1 Intermediate People's Court) supported the above-mentioned criteria of amendments and held that the deletion of the Markush-type elements in the Markush-type claims by Daiichi Sankyo Company, Limited was not directly equivalent to the deletion of the parallel technical solutions, and therefore the amendments did not conform to the provisions of Rule 68 of the Implementing Regulations of the Chinese Patent Law.

In this regard, the (2016) Supreme Law Xing Zai No. 41 Decision pointed out: “in view of special nature of chemical invention - creations and in consideration of at the beginning of drafting of the Markush-type claims, the applicant for the patent had an opportunity to draft all structure modes into one claim as much as possible, in order to obtain a maximum protection scope of rights, and therefore, strict restrictions must be imposed on amendments to the Markush-type claims in the invalidation phase. The principle that the amendments to the Markush-type claims are allowed should be that a type of compound or a single compound having new properties and functions cannot be generated due to the amendments, however, individual factors should be fully considered as well.

If the applicant for the patent or the patentee is allowed to delete any of the options of any variable, even if the deletion narrows down the protection scope of the claims, it does not harm the public's rights and interests, but there exists uncertainty as to whether the new protection scope of rights will be created accordingly, it not only fails to give the public a stable expectation, but also goes against maintenance of stability of system for determination of patent rights”.

Through the above-mentioned verdict of the Supreme People's Court, it was clarified that one or more variables in the Markush-type claims were usually not allowed to be deleted in the invalidation procedure. Naturally, discussions and controversies in the theoretical level will not disappear with the judicial decisions, but the judgment has important significance for the unified judicial trial standards, and brings about the applicant/patentee a more unified expectation of consequences of legal actions.

In addition, stricter requirements for drafting of the Markush-type claims will be imposed by the principle that no amendment is allowed in the invalidation procedure.

Since the Markush-type claims are prevalent in the chemical field, especially in the medical field, it should be fully taken into account by patent agents.

Drafting a proposal by a patent agent

When focusing on drafting of Markush-type claims, a patent agent is supposed to pay attention to: