What if we change change our logo? The legal implications of making variations in a trademark
Blog Intellectual Property Blog

The European Union Intellectual Property Network (EUIPN) has recently published Common Practice on the use of trademarks in a form different from the one in which they were registered. This is a frequent source of friction between the marketing and legal departments of a company, as from a commercial perspective, the need for change does not always take into account the legal and economic implications that any modifications could have on a company’s trademark portfolio. It is not a question of avoiding change altogether but rather ensuring that it is done properly. Let’s take a look.

It is common practice as part of normal business activity to change things from time to time, and the need may arise to alter the company’s trademarks, adapting its configuration, lettering or graphic elements to new trends, fashions or consumer tastes. However, what might be advisable from a commercial perspective, when a mark has been used in the market for some time, could have significant legal implications. For example, if the change is particularly significant, it may well be necessary to file new trademark applications in order to protect the trademark, which could involve a substantial change in the company’s trademark portfolio.

It is important to remember that as a general rule, trademarks should be used exactly as they were registered. However, where minor changes are proposed, rather than employing excessive rigor, some modifications are allowed, provided that they do not alter the distinctiveness of the trademark. In trademark terms, changes tend to be referred to as “acceptable” and “unacceptable”. In the case of “acceptable” changes, we are referring to those that do not impact the distinctiveness of the trademark, and therefore, do not require a new trademark registration, nor do they involve risk of harming trademark rights over the sign. Conversely, “unacceptable” changes are deemed to be those that alter the mark to such a degree that we are talking about a new trademark.

Where do we draw the line to ensure that we do not modify a trademark “too much”? It depends. There is no unequivocal response, and as always, from a legal perspective, the answer lies in the grey area somewhere in between. In addition, there is a further difficulty because, as we are well aware, trademarks are territorial rights and therefore, in order to determine whether changes are acceptable or unacceptable we will have to abide by the applicable law in every country, and the interpretation that the courts have made of those laws.

In the case of the European Union Trademark, we have a single regulatory framework, and the Court of Justice of the European Union as its highest interpretative authority. In this context, the European Union Intellectual Property Network (EUIPN) has agreed on a common practice regarding trademarks used in a form different to that for which they were registered (see link) What is its purpose? It analyzes the commonest types of change in signs, mainly through the addition or removal of elements, changes to these, or a combination of both. The decision to create a common practice is designed to increase transparency and legal security and, at the same time, to facilitate the work of the different Trademark Offices.

Firstly, a two-step process of assessment has been devised in order to determine whether this is an acceptable or an unacceptable change: 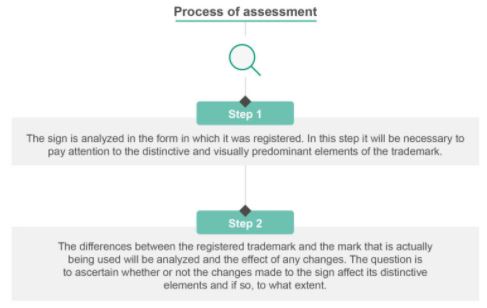 Having established the analytical procedure, the most common changes are addressed, which, as mentioned, include the addition or removal of elements, changes to those already existing, or a combination of both.

By way of example, when the additions are distinctive elements per se, we can normally assume that the change is unacceptable, that is, a change which alters the distinctive nature of the trademark as it was originally registered, therefore requiring a new registration in order to protect it. The EUIPN gives the following example:

Conversely, the change is acceptable when the distinctive element of the mark is not affected, as occurs in the following example. In this case, the addition of the fish design does not affect the distinctive character of the word mark as it was registered, that is, the word “GERIVAN”:

Therefore, in the second case there is no need to redesign your trademark strategy by filing new trademark registrations unless, of course you also want to obtain exclusive trademark rights in the fish design.

Another common practice is the omission of some of the registered elements. In such cases, the omission of any elements that are distinctive is usually considered to be an unacceptable alteration, except in those cases where the omitted element was not perceived as such by consumers, for example, due to their reduced size or a secondary position: 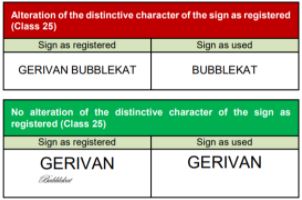 On the contrary, omission of non-distinctive elements does not usually have an impact on the distinctive character of the registered trademark, that is, such changes are generally considered to be acceptable, as may be seen in the following example:

The total lack of distinctive character of the sign BIO implies that in this case, the main distinctive element “GERIVAN” is not affected and, therefore it does not affect the validity of the trademark registration.

The possible variations are practically infinite and affect elements such as typeface and fonts, size, color, and position of different elements that make up the sign. But again, the key to this is whether the distinctive character of the mark is affected in terms of the form in which it was registered.

By way of example, you would generally expect that changing the colors used in a word mark would be acceptable:

However, a change of color might be a determining factor and therefor unacceptable in cases where the color is a distinctive element in itself, as occurs in the following example:

Our blog post provides no more than a taste of the numerous examples and recommendations included in the common practice issued by the EUIPN, which is seen as an extremely valuable guide, when the need arises, for deciding which changes are innocuous and which are not. It will not always be easy to determine where to draw the line separating acceptable from unacceptable changes, but it is a necessary exercise in order to ensure that you do not carry out any ill-considered alterations that, ultimately, could irreparably affect your trademark portfolio.