On November 26, 2019, the federal government announced the first stage of the Infrastructure National Agreement with the Private Sector (NIA). The announcement was made at the daily presidential press conference with the main industrialists and lobbying groups in Mexico in attendance. The NIA has been described as a tool to facilitate project development in Mexico. 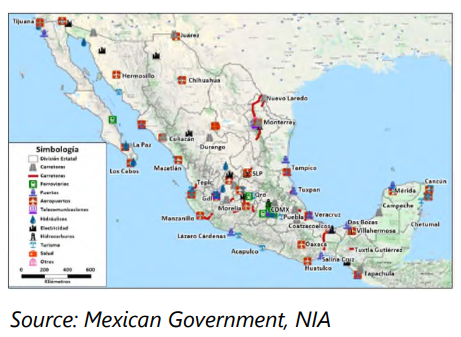 Neither further detail on the projects nor the bidding guidelines have yet been issued. The expectation is that some of these projects would only involve the continuation of projects previously awarded but suspended due to reasons such as social consultations.

The first bundle of projects was prepared by the federal government in coordination with representatives of the private sector. The Ministry of Transport and Communications (SCT), Local Transport Ministries and the applicable Port Authorities (APIs) will be in charge of the tendering of most of the projects.

According to the information publicly available, the first set of projects will be privately funded, the second will have mixed funding, and the third will be government-funded.

The first stage of the NIA does not include any reference to projects within the power or the oil and gas sector. However, energy projects may be announced as part of the second stage.

Although not announced as part of the NIA, on October 24, 2019, bidding guidelines were

issued by the Federal Electricity Commission (CFE) for the award of an agreement for the construction of the Salamanca 836 MW combined-cycled power plant, supported with a PIDIREGAS approval. CFE has further confirmed its intention to continue with the development of the four additional combined cycle power plants already included in the infrastructure programs issued by the prior administration.1