“The great deal-making president sat on the sidelines. Despite and because of this frustration, I've been having conversations with the Republican leader over the weekend about a path forward. After several discussions, offers, counteroffers, the Republican leader and I have come to an arrangement. We will vote today to reopen the government to continue negotiating a global agreement with the commitment that if an agreement isn't reached by February the 8th, the Senate will immediately proceed to consideration of legislation dealing with DACA. The process will be neutral and fair to all sides. We expect that a bipartisan bill on DACA will receive fair consideration and an up or down vote on the floor.”

Government Reopens. Just before yesterday’s cloture vote on the continuing resolution (“CR”) that ended the three-day government shutdown, Schumer laid out Senate Majority Mitch McConnell’s (R-KY) verbal commitment to immediately take up consideration of a bipartisan DACA bill if the issue is not resolved by the next government funding deadline, Feb. 8. Although the commitment is nonbinding, it was enough to secure the Democrats’ support for a 17-day CR.

The Senate voted 81-18 to reopen the government. On the GOP side, Sens. Rand Paul (R-KY) and Mike Lee (R-UT) voted against the measure.

For many of these Democratic members, they simply do not trust McConnell to hold up his end of this shaky deal. For the others, a presidential run in 2020 might have something to do with their “no” votes.

Groundhog CR and A Game of Devil’s Advocate. The Feb. 8 CR approved by Congress isn’t much different from an earlier version that passed the House on Jan. 18. That version would have extended government funding through Feb. 16.

In short, Democrats voted for a CR that is more or less the same as the one they voted against on Jan. 19, which led to the short-lived government shutdown. Sure, this time around they got firm assurances from the Senate GOP leadership that the upper chamber will act soon on a DACA bill. But critics on the left wonder whether verbal assurances from McConnell can be considered a meaningful concession for reopening the government. Further, by supporting this CR, do the Democrats have any real leverage left to force a resolution to the DACA problem?

The 16 Democrats who voted against the stopgap might be right to doubt this bargain. First, what’s to keep McConnell from reneging on his verbal, nonbinding commitment to draft, take up, and vote on a DACA bill?

In his floor speech before the cloture vote yesterday, Schumer said, “I expect the majority leader to fulfill his commitment to the senate, to me and to the bipartisan group, and abide by this agreement. If he does not, of course, and I expect he will, he will have breached the trust of not only the Democratic senators but members of his own party as well.”

Someone should check in with Sen. Susan Collins (R-ME) to see when the upper chamber will take up a measure to stabilize the health insurance markets and lower premiums — a vote that McConnell promised to hold in exchange for her support for the GOP’s tax bill.

Second, House Republicans are not a party to this CR/DACA-vote arrangement put together by Senate moderates. In other words, they are under no obligation to take up a bill in their own chamber. And even if Speaker Paul Ryan (R-WI) will allow a vote in the House, passage is not guaranteed.

In view of all this, it’s fair to question what Senate Democrats accomplished in recent days. In about three weeks, Congress will again face another shutdown drama. Democrats will essentially be back to where they started.

Now You Tax It, Now You Don’t. As part of the 2017 Tax Act, Republicans enacted a new 1.4 percent excise tax on the net investment income of private university and college endowments. The tax applies to schools with over $500,000 in assets per tuition-paying student. Now, just weeks after enactment, Rep. Tom Reed (R-NY) is working on a bill to repeal the tax, in exchange for assurances on how the endowments are used.

Rep. Reed noted that the tax was enacted as a means of holding universities accountable for their spending. The lawmaker believes introducing measures to ensure that colleges are using their endowments to lower tuition could encourage good actors. Rep. Reed noted that he is working with other offices on legislative text — he hopes to introduce a bill this May to coincide with college graduations.

Pump It Up. A copy of the Trump Administration’s six-page draft infrastructure plan has leaked. The document, the authenticity of which has not been confirmed by the White House, opens with a list of funding principles that, among other things, include:

Interestingly, the draft plan does not include a gas tax increase, which the administration has considered in the past.

Despite its absence in the administration’s draft plan, calls for increasing the gas tax will unlikely go away any time soon. Last week, the U.S. Chamber of Commerce (“U.S. Chamber”) put a spotlight on the issue when it proposed a 25-cent increase as part of its four-part plan for infrastructure investment. Thomas J. Donohue, president and CEO of the U.S. Chamber, argued that “it’s the simplest, fairest, and most effective way to raise money we need for roads, bridges, and transit.”

The U.S. Chamber’s 25-cent increase would raise $394 billion — well short of Trump’s $1 trillion infrastructure plan. But the U.S. Chamber said that its plan goes beyond the gas tax, adding that it “will push for an entire toolkit of funding and financing options.”

Tax Extenders Chart. There’s still no sign of life for tax extenders, but the Tax Policy Update team has put together a chart listing the provisions included in the Tax Extenders Act of 2017 (S. 2256) that was introduced by Senate Finance Chairman Orrin Hatch (R-UT) on Dec. 20, 2017.

Every quarter, the CFPB formally requests operating funds from the Federal Reserve. Last quarter, former Director Richard Cordray asked for $217.1 million; the quarter before that he asked for $86.6 million.

In a letter to Federal Reserve Chair Janet Yellen, Mulvaney noted that the CFPB already had $177 million in the bank, which would cover the $145 million the bureau had budgeted for its second quarter. Mulvaney noted that his predecessor had maintained a “reserve fund” in case of emergencies that Mulvaney deemed unnecessary. Many have read this as a harbinger of changes to come at the agency.

CFPB Makeover. On Jan. 18, the CFPB dropped a lawsuit against four payday lending companies that were charged with allegedly collecting debts that people did not owe and for offering loans with interest rates between 440 percent and 950 percent. The four companies are Golden Valley Lending, Silver Cloud Financial, Mountain Summit Financial and Majestic Lake Financial.

In a statement, the CFPB said it will continue to investigate the transactions. The companies released a statement as well, noting that the case never should have been brought in the first place.

The CFPB’s withdrawal from the case represents a new Trumpian era for the bureau. Under Mick Mulvaney’s leadership, the CFPB has launched a public review of the bureau’s operations that will likely lead to a significant overhaul of the agency. Over the next few weeks, the bureau will publish formal requests for public comments on various enforcement, rulemaking, and market monitoring activities.

Apple’s Tax Reform Harvest. Last week, Apple joined a slew of companies to announce plans to invest windfalls from tax reform domestically. In addition to a new campus and a promise to create 20,000 jobs in the U.S., Apple also plans to make a $30 billion investment in capital expenditures, including $10 billion on new data centers in the U.S. The first data center will be in Reno, Nevada. The tech giant also intends to expand a previously announced fund to invest in U.S. advanced manufacturing facilities from $1 billion to $5 billion.

The company noted that it expects to pay about $38 billion in taxes on over $250 billion of cash that it plans to repatriate.

Apple noted that its contribution to the U.S. economy would amount to $350 billion over the next five years — this includes current spending as well as new investments. It is unclear how much of this is attributable to the recently enacted tax bill.

The notice announced the IRS and Treasury’s intention to issue further regulation on rules to address the calculation of earnings under the transition tax, among other things.

The IRS and Treasury have requested public comments to the notice and on what additional guidance should be issued to assist taxpayers in computing the transition tax. No deadline was specified.

1. The International Monetary Fund released new projections indicating that the new GOP tax law will increase growth by 2.7 percent this year, up from a previous forecast of 2.3 percent. Next year, the IMF expects the U.S. economy to expand by 2.5 percent, up from 1.9 percent.

4. The House Financial Services Committee approved the Portfolio Lending and Mortgage Access Act (H.R. 2226), a bill that would allow mortgages held by lenders with less than $10 billion in assets to receive “qualified mortgage” protection. The committee also cleared 14 additional bills relating to community financial institutions, the FSOC, and the Volcker Rule, among other things. 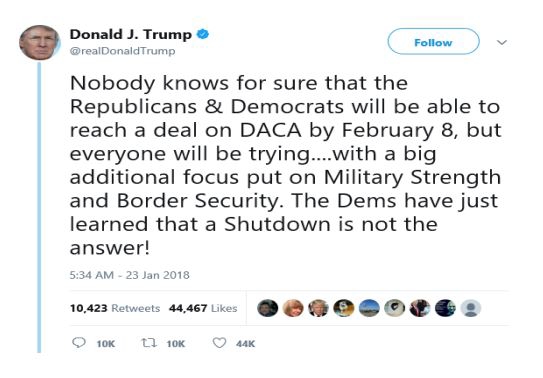 Meeting of the Technology Advisory Committee.

Discussion on the threat of tariffs on the growing U.S. economy.

Conference to discuss the new GOP tax law and what it means for states.