With the Resolution No 605-r, dated September 18, 2017, the Cabinet of Ministers of Ukraine (CMU) approved the Energy Strategy of Ukraine for the period up to 2035 “Safety, Energy Efficiency, and Competitiveness” (the New Energy Strategy of Ukraine up to 2035). On its website the CMU stated that the dramatic events which took place in Ukraine in early 2014 had fundamentally changed the situation in the energy sector, rendering its basic strategic document out of date. It called for a rethink of the Ukrainian Energy Strategy and the production of a viable document dealing with energy safety and the sustainable development of the energy sector.

The energy generation structure in Ukraine does not reflect global energy sector trends. The main challenges are:

At the same time, the Ukrainian energy sector is potentially capable of satisfying all of the country's economic ambitions and of ensuring its energy independence.

The New Energy Strategy of Ukraine up to 2035 keeps ineffective and outdated energy infrastructure unchanged. It lacks a number of important parameters. It is quite expensive in terms of capital investment, operational costs and consumption of fuel and energy resources. It also requires the import of fossil fuels for energy production.

Here are the key parameters of the New Energy Strategy of Ukraine up to 2035 (Table 1).

Table 1. Key parameters of the New Energy Strategy of Ukraine up to 2035 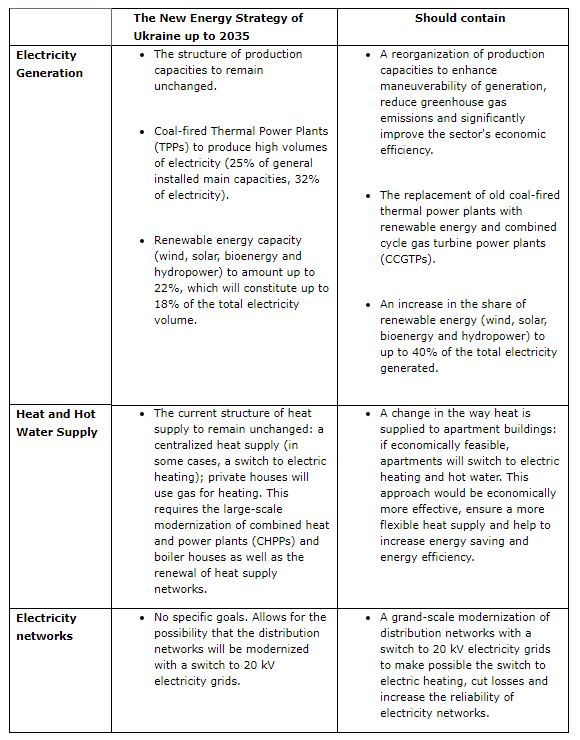 Balance of Fuel and Energy Resources

The central role of coal-fueled power generation capacities and their estimated large volumes of electricity output will cause a coal deficit. As a consequence, coal will have to be imported (according to some calculations, a volume of 5-14 million tons per year), which, in its turn, will increase its price on the domestic market, having a negative impact on Ukraine's energy independence.

Gas consumption, by contrast, will be lower than its domestic production, resulting in lower gas priceson the domestic market.

The following issues, among many others, remain unresolved:

The recently adopted New Energy Strategy of Ukraine up to 2035 does not refer to its effect on the GDP.

According to official statistics Ukrainian GDP was USD 93.270 billion in 2016. It does not take much to calculate using statistical data on energy consumption and average market prices of energy resources (excl. VAT) that the total annual cost of energy resources in 2016 is equal to USD 15.463 billion or 17% of GDP (energy costs to GDP), which is a lot even for the developed economy in a cold climate. To compare, in a country with a colder climate like Canada energy sector accounts for almost 7% of nominal GDP1.

High cost of energy resources has overall negative impact on the economy and thus, this issue should be tackled by the Energy Strategy.

The New Energy Strategy of Ukraine up to 2035 does not set any specific goals. It simply allows for the possibility that the distribution networks are modernized with a switch to 20 kV electricity networks. A planned steady switch to such a network configuration would instead have enabled more homes to make the switch to electric heating, reduced costs and increased the reliability of the electricity supply.

Without this switch, the current configuration of available networks makes it impossible for domesticconsumers to replace their gas with electric heating.

The issue regarding electricity storage for balancing purposes has not been considered at all, which is another important aspect of safety and reliability of the energy system of Ukraine.

The environmental impact of coal-fueled TPPs has been ignored despite their being the main polluters.

The issue of reducing emissions has not been mentioned even though the global community isseriously discussing how to stop coal consumption completely by 2050. At the U.N. Climate Change Conference in Marrakesh, November 7-18, 2016, 48 countries declared their intention to end their consumption of coal altogether. Earlier, in December 2015, the Paris Climate Agreement was adopted in the hope of slowing global warming. The 195 signatories undertook to jointly reduce emissions in order to keep the global temperature rise this century to less than 2C above pre-industrial levels.

According to the New Energy Strategy of Ukraine:

The strategy document should have at least clarified the need to implement a carbon dioxide emission fees, which, according to the IMF, may be the most effective strategy for greenhouse gases emission reduction.

The IMF states that two things are necessary to tackle the causes of climate change:

Unfortunately, the global trends on the environment have been largely overlooked by the authors ofthe New Energy Strategy of Ukraine.

Energy independence means reducing energy consumption, diversifying supply sources and increasingproduction. None of these has been properly addressed. For example, the new strategy contains mechanisms for balancing the supply and demand in the gas market in the future (by means of reducing gas consumption and increasing its production), while most generating capacities use coal in volumes that might significantly exceed its domestic production. Unfortunately, this issue remains untacked by the New Energy Strategy of Ukraine.

In Place of a Conclusion

The approved model lacks economic and energy effectiveness and leaves the question of its effect onGDP open. It is inexplicable and strange in a strategic document of this level, which contains the outline of the strategic landmarks for the development of the Ukrainian fuel and energy complex up to2035, that, among other things, it lacks such key elements as evidence in support of the chosen energy sector structure, and energy balance forecast.

The strategy document leaves each crucial aspect of Ukraine’s future energy sector with a question mark hanging over it. In place of a conclusion, then, I have ended up with the very same set of questions I started out with: Ukrainian Energy Strategy up to 2035: Safety? Energy Efficiency? Competitiveness? Sadly, we still don’t know.