Following the UK’s EU exit, the UK government committed to introducing new rules for authorities that award subsidies to businesses. After eight weeks of consultation the UK government published the Subsidy Control Bill and consultation response on 30 June 2021. The rules are intended to be simpler and clearer than the EU State aid rules that they replace in the UK, but they seem likely to give rise to just as many uncertainties as the EU regime.

The key elements of the new system:

Some of the key features of the new Subsidy Control Bill include:

1.) The definition of “subsidy” is very similar to the definition of “aid” under the EU rules, covering a wide range of assistance, including grants, loans, guarantees, given by public authorities or from public resources, that confers an advantage on a business.

2.) A public authority is required to assess a subsidy against the “subsidy control principles” set out in the legislation before giving it. An additional UK-specific principle is the objective that ‘subsidies should be designed to achieve their specific policy objective while minimizing any negative effects on competition or investment within the United Kingdom’.

3.) Another feature of the UK rules, with no EU parallel, is the prohibition of subsidies that are conditional on relocation of economic activities between different parts of the UK.

4.) The rules introduce four categories of subsidies, with different routes for assessment. The categories are (i) “Streamlined” schemes for low risk subsidies that comply with specific rules. The intention seems to be to adopt rules approving particular categories of subsidies, subject to conditions, in much the same as EU block exemptions, (ii) the normal route, under which authorities will assess subsidies against the principles before awarding them, (iii) subsidies of interest, which may be referred to the Competition and Markets Authority for a report, either by the authority itself or by a government Minister, and (iv) subsidies of particular interest, which must be referred to the CMA.

5.) Unlike in the case of a European Commission State aid decision, the CMA does not have the power to block or clear aid, and an authority may – after the expiry of a 5 working day standstill period – proceed with the award, but will be at risk of judicial review by an interested party or the government if it does.

6.) The ability of the CMA to examine past subsidies and make reports on them – this can include directions for future awards. 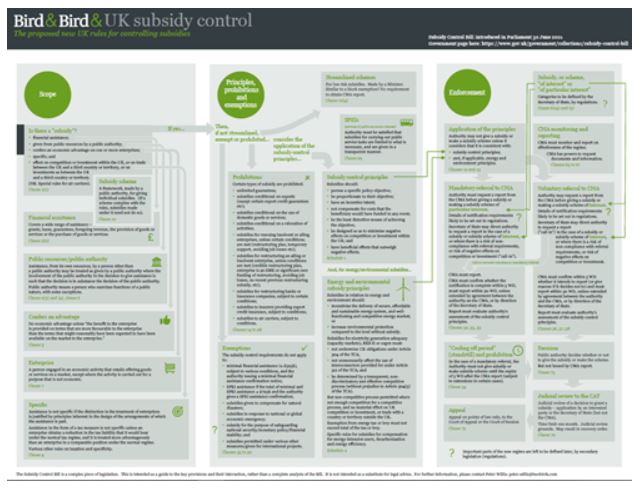