Considering the Central Bank of Venezuela has not published the National Consumer Price Index since December of 2015, different reliable sources have estimated the inflation for 2017 between 2,616%[8]and 2,735%[9] and the inflation for 2018 in 1.299.724%,[10] the value of the TU is divorced from reality. Something similar occurred in 2016, 2017 and 2018.   In cases of taxes determined annually, such as income tax, the TU value will be the one in force for at least 183 consecutive days during the period. For taxes determined other than annually, such as VAT, the TU will be the one in force at the beginning of the period.   The TU adjustment will only apply for determining national (federal) taxes administered and collected by the Revenue Services and the fines imposed by such office.   The adjustment of the TU increased in approximately 194% other concepts, such as the tax base of taxes and fees.  The most important are: 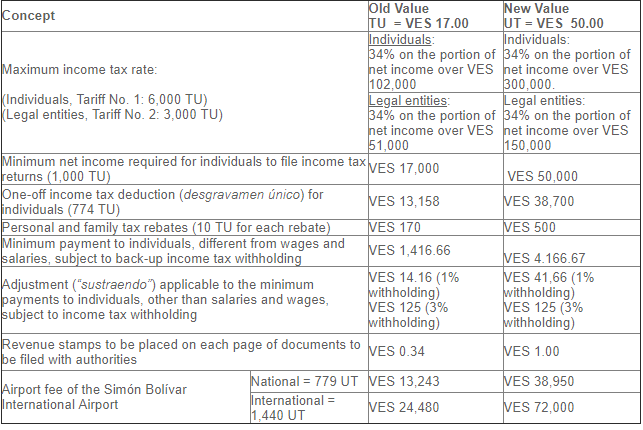