President Biden has taken a holistic approach to pushing his pro-labor agenda, using the bully pulpit to make pro-union statements, signing executive orders revealing that the creation of union jobs is one of the administration’s top priorities, coming out in support of pro-labor legislations—namely the Protecting the Right to Organize Act (PRO Act), and integrating labor into its policy proposals

1. The Biden Administration created a pro-union task force, which consists of 20 cabinet members and heads of federal agencies whose goal is to take a “whole-of-government approach” to empower workers. The task force has 180 days to make a set of recommendations on:

2. While unlikely to pass in its current form, the PRO Act provides a clear idea of what the Biden administration is hoping to achieve. If passed, it would be the first major overhaul of the National Labor Relations Act (NLRA) in more than 70 years and would have far-reaching consequences for union and non-union employers alike.

3. The administration intends to enact a federal standard for making employee-independent contractor determinations based on the stricter “ABC” test. This will likely lead to heightened scrutiny around worker classification.

4. Employers can also expect a broader definition of “joint employer.” Where a joint employment relationship exists, employers can be held jointly and severely liable for wage and hour claims.

5. The American Jobs Plan (Plan, AJP), the $2 trillion infrastructure bill, is a signature Biden Administration proposal that aims to focus spending on a broad array of sectors, including manufacturing, transportation, energy, healthcare, local government and more. Employers can expect a version of the current plan to pass, which will have the following impact for employers

6. With regard to labor law, the American Jobs Plan calls for the passing of the PRO Act as well as a number of other labor requirements, such as:

7. From an employment law perspective, the American Jobs Plan will make significant changes to workplaces in the following ways:

8. The Biden Administration has issued a number of executive orders impacting workplaces. These orders have mostly affected government contracts but orders like the Worker Health and Safety Protections Order alsoimpact private employers. Private employers with any interaction with the federal government will want to keep an eye on these orders and take note of the requirements.

9. The National Labor Relations Board’s Acting General Counsel Peter Sung Ohr issued a memorandum signaling his expansive view of employee rights to engage in “mutual aid or protection” and “inherently concerted activates.” This opens up questions about whether social justice activities are protected, whether protesting who your employer does business with is protected and whether engaging in speech related to workplace health and safety and racial discrimination issues are protected under the Acting GC’s expansive reading 10. Considerations for employers: 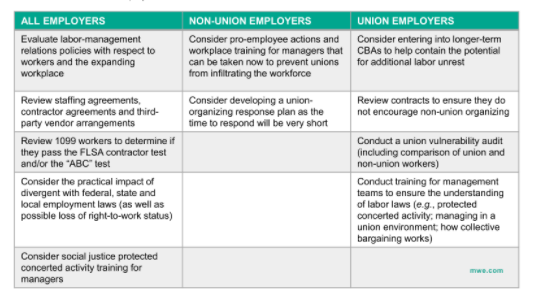