United States Gets Serious About Producing Hydrogen at Scale

The US government took important steps this year to promote a growing hydrogen economy. On August 16, 2022, shortly after the US Department of Energy (DOE) announced a game-changing program to fund $8 billion for the development of regional hydrogen hubs in accordance with the provisions of the Infrastructure Investment and Jobs Act, President Joseph Biden signed the Inflation Reduction Act (IRA) into law, funding approximately $369 billion in new renewable and green energy projects across the country.

As a versatile clean energy solution, experts believe that the production and consumption of hydrogen at scale will help reduce harmful emissions from hard-to-decarbonize industries like long-haul trucking, maritime shipping, and steel. DOE’s hydrogen hub funding coupled with the IRA’s first-of-its-kind production tax credit for clean hydrogen project development send a strong message to the world that the US government expects clean hydrogen to play a critical role in global energy transformation.

The Biden-Harris administration’s Infrastructure Investment and Jobs Act, signed into law on November 15, 2021, appropriated significant funding to DOE, including $8 billion in funding to support the development of clean hydrogen hubs to improve clean hydrogen production, processing, delivery, storage, and end use. DOE’s newly created Office of Clean Energy Demonstrations is tasked with developing at least four regional clean hydrogen hubs in the United States. These hubs will create networks of clean hydrogen producers, clean hydrogen consumers, and connective infrastructure located in close proximity to accelerate the use of hydrogen as a clean energy carrier. DOE is expected to issue a funding opportunity announcement in September or October 2022 and announce selected projects by May 2023.

Various states and entities in the public and private sectors have come together to develop proposals for the regional clean hydrogen hubs program. These partnerships may spur investments, result in more local benefits to both public and private stakeholders, and allow individual states to make progress toward achieving their decarbonization goals. For example, New York has entered into an agreement with several other states, including Connecticut, Massachusetts, and New Jersey, and at least 40 hydrogen ecosystem partners to collaborate with the New York State Energy Research and Development Authority, New York Power Authority, and Empire State Development to develop plans for a regional hydrogen hub that can advance safe green hydrogen energy innovation and investment to address climate changes while improving the health, resiliency, and economic development of the regions residents. Colorado, New Mexico, Utah, and Wyoming have agreed to work together to develop the Western Inter-State Hydrogen Hub, partnering with academic, research, industry, and community partners and stakeholders to develop and submit a proposal for a regional clean hydrogen hub to DOE.

Although not every hub proposal will receive funding from DOE, other opportunities exist or will arise to facilitate the integration of hydrogen. For example, state legislatures have introduced or passed several bills to further the development of clean hydrogen by administering grants to projects that demonstrate and scale the production, processing, delivery, storage, and end use of clean hydrogen. Other funding opportunities could be announced in the future to fund the hub proposals that are not selected, and those hub proposals could be implemented or modified in the future to further expand the hydrogen network.

DOE’s Office of Energy Efficiency and Renewable Energy announced a $40 million funding opportunity on August 23, 2022, to further accelerate the research, development, and demonstration of clean hydrogen technologies and grid resilience to achieve the goals of carbon-free electricity by 2035 and net-zero carbon emissions across the entire economy by 2050. This funding opportunity is intended to advance the Hydrogen Shot goal of reducing the cost of clean hydrogen by 80% to $1 per 1 kilogram in 1 decade (111) while supporting DOE’s [email protected] initiative to develop clean and affordable hydrogen production, transport, storage, and utilization across multiple sectors in the economy.

Financial assistance awards will come in the form of cooperative agreements for $750,000 to $5 million for projects lasting three to four years. DOE will cover a maximum of 80% of total costs for projects that advance solar hydrogen production technology, improve hydrogen emissions detection and monitoring, demonstrate higher-density and lower-pressure hydrogen storage technologies, and lower the costs and enhance the durability of hydrogen fuel cells for medium- and heavy-duty vehicles.

DOE encouraged applicant teams to include stakeholders in academia, industry, and national laboratories across multiple technical disciplines. The application process is in two phases: concept papers are due on September 23, 2022, and full applications are due on December 1, 2022.

The IRA is one of the US government’s largest investments in a green economy, and the development of clean hydrogen, in history. The full package is anticipated to include more than $400 billion in spending and bring in more than $700 billion in revenue. The IRA amends the Internal Revenue Code (Code) by extending and adding energy tax credit provisions that support renewable energy growth and promote the development of carbon capture, utilization, and sequestration. These tax credits will be made available to a full range of green technology projects, including hydrogen projects. The credits may prompt companies to reevaluate their overall climate change plans over the next several years to maximize the tax credits achievable.

Hydrogen production, storage, and utilization are eligible to receive tax benefits. The IRA adds a new annual production tax credit (PTC) under Section 45V of the Code for “qualified clean hydrogen” produced and sold or used after December 31, 2022, at a qualifying facility on which construction starts before 2033. This PTC would apply for the 10-year period beginning on the date that the eligible facility is placed in service. The IRA defines “qualified clean hydrogen” as hydrogen produced through a process that results in a lifecycle greenhouse gas (GHG) emission rate of not greater than 4 kilograms of CO2e (generally, GHG emissions) per kilogram of hydrogen.

The amount of the Section 45V credit initially depends on the lifecycle GHG emissions rate of the facility. Generally, the credit amount equals an applicable percentage of $0.60 (adjusted for inflation) if the facility produces qualified clean hydrogen that results in lifecycle GHG emissions of less than 0.45 kilograms of CO2e per kilogram of hydrogen. However, as shown in the table below, if the CO2e level exceeds 0.45 kilograms of CO2e per kilogram of hydrogen, the credit is available at a lower rate: 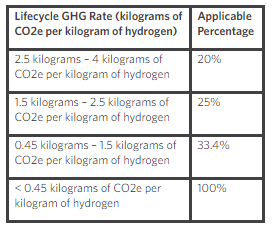 Any such credit amount is increased by five times if the taxpayer satisfies certain US Department of Labor–based wage and apprenticeship standards. Thus, the maximum credit could be $3.00 per kilogram of hydrogen produced, which some experts believe is more than half the cost to produce clean hydrogen.

A capital expenditure–based, frontloaded investment tax credit (ITC) may be claimed in lieu of the Section 45V clean hydrogen PTC.

Stakeholders interested in participating in DOE programs and/or in assessing their eligibility for the tax credits should stay aware of funding opportunity announcements as well as issuances by DOE, the Department of Treasury, and the Department of Labor related to the implementation of the IRA. Interested parties should also be on the lookout for opportunities to provide comments to federal agencies regarding future regulations designed to promote clean hydrogen as a key contributor to global energy transformation.