Financial Restructuring - Status Amid the Pandemic

In response to the economic crisis caused by the COVID-19 pandemic, lawmakers very quickly started working on improving the legal framework to enhance existing and develop new restructuring instruments. Contrary to expectations, not that many restructurings actually took place in 2020, likely because of support made available to businesses.

Facing the second wave of lockdowns, creditors might not be able to support debtors any longer. Debtors and creditors should try to apply truly holistic solutions aimed at changing business strategy and establishing sustainable operations. What instruments are available that would adequately satisfy these purposes and ensure efficient restructuring implementation?

Our experts, Ihor Olekhov and Kateryna Chechulina, look into these issues for the benefit of those considering restructuring in Ukraine.

Since the very first lockdown in 2020, the governments across the world started introducing various supportive measures to enhance existing and develop new restructuring instruments. A new restructuring tool was introduced in the United Kingdom: a rescue and reorganisation procedure under Part 26 A of the Corporate Insolvency and Governance Act 2020.

Among those who immediately used the benefits of the new reorganization procedure was DTEK Group, the biggest private investor in Ukraine's energy sector.  On 8 February 2021 DTEK announced on reaching agreement with its bondholders and bank creditors on the key restructuring terms of its debt, including restructuring of USD 425 mln notes. The agreed restructuring plan suggests not only changes to the debt amortisation, overall term and pricing, but also appointment of the noteholders’ representatives to DTEK’s board of directors. Such unique solution resulted in the price of the notes of DTEK – just recently being in default and downgraded in ratings - rocketed up to 80% of its nominal with further potential growth.

Ukraine entered the crisis with the new Bankruptcy Code in place. In effect since 2019, the code established more transparent and efficient bankruptcy and restructuring procedures. These were expected to reduce the high ratio of non-performing loans through the debtors’ financial restoration. In light of the pandemic, however, and to protect businesses from its negative financial impact, creditors cannot currently initiate bankruptcy for claims that matured after 12 March 2020. The prohibition will be in place until 28 February but may well be extended further. This is what makes the financial restructuring provided by Law of Ukraine “On Financial Restructurings” No. 1414-VIII dated 14 June 2016 (the “Restructuring Law”) the key instrument to consider. 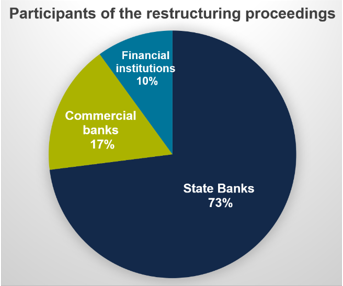 Incentives and benefits to using the Restructuring law

There are also other major advantages available to parties:

The latter gives one of the important benefits and tools to use this restructuring procedure. It provides a quick solution to address ongoing financial difficulties and also allows for a fully-fledged restructuring aimed at changing the business strategy and approach towards sustainable operations. The debtors can thus get the most of it to ensure the long-term effects and a true recovery.

Financial restructuring in Ukraine is voluntary. It can be initiated only by a debtor. However, to launch the procedure, consent must be given by one or more financial institutions holding at least 50% of all the financial institutions’ total claims against the debtor. Any other creditors can participate if the debtor agrees. A similar approach has been widely used over the years in other jurisdictions and has proved to be a successful one, even though relevant restructuring instruments do not provide any tools for forcing creditors to be involved.

What stands behind this success is understanding that any formal bankruptcy proceedings would likely lead the parties to a less favourable result. This is what drives both creditors and debtors in their willingness to participate in the restructuring and find a compromise. The restructuring terms should be mutually favourable. The creditors not only agree to alter or expropriate their original rights, but are compensated for doing so by obtaining some advantages. By the same token, a debtor, while obtaining a relaxation of its debt service, should give away something in favour of the creditors.

In turbulent times, there are fewer effective solutions for debtors and creditors other than to sit down at the negotiation table and figure out the way forward to deal with the indebtedness. The Restructuring Law could be a very helpful and time-efficient instrument in this process. Despite some deficiencies, it provides many benefits and tools for parties to make a successful restructuring happen. What is required, though, is that the parties to restructuring proceedings change their focus: from quick solutions and immediate benefits towards sustainable business strategies and operations for a long-term positive result. This is what would ensure more truly successful restructurings, popularise the financial restructuring instrument, and develop a good restructuring ethos.