On 13 March, the National People’s Congress announced a plan to continue the overhaul of China’s financial regulatory system. The key changes are as follows:

• The newly created CBIRC will cede some authority to China’s central bank, the People’s Bank of China (PBOC), which will assume responsibility for drafting key regulations and prudential oversight in banking and insurance.

These reforms are meant to address the high systemic risk which has plagued China’s financial system in recent years and which many observers have linked to the fragmentary nature of its regulatory system.

The State Council took the first major step in addressing this problem in July of 2017, when it announced the establishment of the Financial Stability Development Committee (FSDC), a cabinet-level “super regulator” meant to oversee and coordinate China’s four existing financial regulators.

Though the precise workings of this new regulatory system are yet to be revealed, we now know its basic structure. The Pre- and Post-Reform structures are summarized in Figures 1 and 2 below: 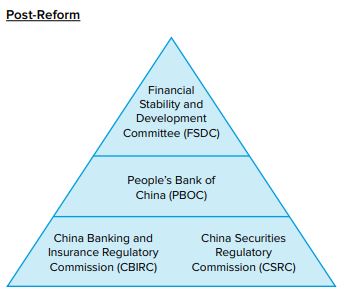 The placing of each of the four regulators on a level horizontal plane is deliberate, as they tend to function independently, though the PBOC does have greater powers in terms of drafting financial reforms and ensuring financial stability. People’s Bank of China (PBOC) China Securities Regulatory Commission (CSRC) China Insurance Regulatory Commission (CIRC) China Banking Regulatory Commission (CBRC) Post-Reform Looking forward, we expect that China’s new regulatory framework will implement stricter regulations that will put the nation’s financial system on a sounder footing. This will be a continuation of an ongoing trend towards increased regulation and stricter oversight. As discussed in our 2017 China Insurance Review, this trend has been particularly pronounced in China’s insurance sector.

Ultimately, this should be propitious to foreign investors, which, relative to their Chinese counterparts are more experienced in dealing with a heavy compliance burden. As well, one of the stated goals of the FSDC is to coordinate efforts to further open China’s financial sector to foreign investment.