One of the principal revisions to U.S. tax law made by the Tax Cuts and Jobs Act (“T.C.J.A.”) involves the way U.S. tax law avoids double taxation when a foreign subsidiary distributes a dividend to a U.S. corporation owning shares representing 10% or more of the voting power in the foreign corporation. This article discusses and compares the foreign tax credit (“F.T.C”) under prior law with the dividends received deduction (“D.R.D.”). Other relevant provisions of U.S. law have been revised, as well. These include the source of income from the production and sale of inventory and the method of apportioning interest expense between domestic and foreign-source income, and the establishment of a separate foreign tax credit limitation basket for branch income. The new provisions are effective for taxable years beginning after December 31, 2017.

The T.C.J.A. adopts the D.R.D. method of eliminating double taxation on dividend income from foreign subsidiaries. First, it partially repeals the deemed-paid F.T.C. provisions, thereby disallowing the credit for foreign taxes paid by the foreign corporation on income distributed to its U.S. corporate shareholders.3 Second, the T.C.J.A. introduces the D.R.D. system, provided that certain ownership hurdles are met.4 As a result, 100% of the foreign-source portion of dividends received from a specified 10%-owned foreign corporation by a U.S corporate shareholder is exempt from U.S. taxation.

Note that this is a Canadian-style D.R.D., rather than a European-style participation exemption, in that capital gains from the sale of shares of a specified 10%-owned foreign corporation remain subject to tax in the U.S. However, the portion of the gain that is attributable to retained earnings and converted into dividend income under Code §1248 now benefits from the D.R.D.

The new law retains the deemed-paid F.T.C. provisions under Code §960 but in modified form. Code §960 provides a deemed-paid credit for Subpart F inclusions for U.S. corporations that are “U.S. Shareholders” of a controlled foreign corporation (“C.F.C.”). The allowable credit under Code §960 is based on current-year taxes rather than the Code §902 “pooling” approach under prior law.6 Pooling is no longer required because the inclusion of earnings under Code §951A, as of the last taxable year beginning before 2018, will harvest those earning for income tax purposes.

In addition, the deemed-paid credit is limited to the amount of foreign income taxes properly attributable to the Subpart F inclusion from a particular C.F.C. This rule is intended to prevent a taxpayer from managing its foreign taxes to benefit from the D.R.D and F.T.C. regimes by blending high-tax domestic income with low-tax Subpart F income.

The I.R.S. is authorized to issue legislative regulations that carry out the purpose of the new law. Although not mentioned in the legislative history, one area that should be addressed by the I.R.S. involves a unified tax base in a foreign country and a C.F.C. that has losses not related to Subpart F income that reduces the taxes attributable to Subpart F income. Presumably, some form of adjustment in taxes should be made. How this will be done is not clear at this time. One way would be to allow the non-Subpart F losses to reduce the amount of Subpart F income. If that were done, the tax benefit of the Subpart F reduction likely would be recaptured by recharacterizing non-Subpart F income in future years to claw back the benefit.

SOURCE OF INCOME FROM A SALE OF INVENTORY

The F.T.C. available to offset U.S. tax has traditionally been limited to the portion of the U.S. tax that is imposed on foreign-source taxable income. Foreign-source taxable income is determined in two steps: The first step involves the determination of the source of gross income. The second step involves the allocation and apportionment of expenses, including, inter alia, interest expense. Under prior law, the allocation and apportionment of interest expense were made on the basis of assets.9 Three methods were available to apportion interest expense:

• Alternative Tax Book Value Method.11 Over time, the tax book value method apportioned excessive interest expense to assets producing foreign-source income simply because depreciable assets located abroad use longer lives to compute depreciation.12 Consequently, taxpayers were permitted to use a method that adjusted for the distortion in values between domestic and foreign assets.

• Fair Market Value Method.13 Under this method, the taxpayer performed a hypothetical valuation of its assets first by arriving at a market capitalization, if it was publicly traded, or by an enterprise value determined through a capitalization of its earnings. Debt held by unrelated parties was added to this value. Tangible assets of each foreign and domestic member of the group were valued and that value was subtracted from the enterprise value. The remainder was the value of the intangible assets. That value was apportioned to all companies based on relative adjusted net income. The value of the assets of each company in the U.S. and abroad was equal to (i) the sum of the values of that company’s tangible and intangible assets, reduced by (ii) that company’s debt. This method reached apportionment values that are viewed to be unreliable, especially for companies that hold intangible assets.

The T.C.J.A. prohibits members of a U.S. affiliated group from allocating interest expense on the basis of the fair market value of assets. Instead, the members are now required to allocate interest expense based on the adjusted tax basis of the assets. As under prior law, the F.T.C. will continue to be limited to the portion of the U.S. tax that is imposed on foreign-source taxable income.

Provisions Not Yet in Effect

The Senate proposed to accelerate the effective date of Code §864(f), which is currently scheduled to take effect from January 1, 2021, to impact tax years beginning after December 31, 2017. Although Congress did not include the Senate’s recommendation in the T.C.J.A., the interest expense allocation calculation under Code §864(f), as opposed to the current method, is worth mentioning. Code §864(f) permits U.S. members of a U.S.-based worldwide affiliated group to elect to allocate and apportion interest and other expenses on a worldwide basis. A result is that interest expense of foreign members of a U.S. affiliated group is taken into account in determining whether a portion of the interest expense of thedomestic members must be allocated to foreign-source income. An allocation to foreign-source income generally is required only if, in broad terms, the domestic members of the group are more highly leveraged than is the entire worldwide group. The rules under Code §864(f) are generally expected to reduce the amount of the U.S. group’s interest expense that is allocated to foreign-source income. To illustrate, take the following example:

Based on the above facts, the allocation of interest expense under Code §864(f) and Code §864(e) is as follows: 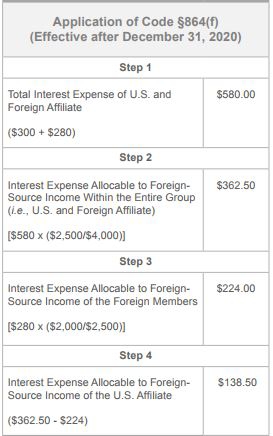 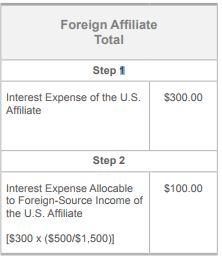 The foregoing illustrates that the U.S. affiliate is more highly leveraged than the foreign affiliate. Consequently, the portion of the U.S. company’s interest expense that is allocated to foreign-source income would increase when the apportionment of interest expense is computed on a global basis.

As mentioned above, the F.T.C. that is available to offset U.S. tax will continue to be limited to the portion of the U.S. tax that is imposed on foreign-source taxable income. This is known as the F.T.C. limitation. The F.T.C. limitation is applied separately to (i) investment income and (ii) all other income.14 This is intended to prevent income that is subject to relatively lower tax – typically investment income from foreign sources – from being used to absorb credits on highly-taxed income that would otherwise exceed the limitation.

A new F.T.C. limitation basket for foreign branch income has been introduced by the T.C.J.A.15 Under the provision, foreign branch income is a U.S. person’s business profits attributable to one or more qualified business units (“Q.B.U.’s”) in one or more countries.16 Generally, a Q.B.U. is defined in Code §989 as “any separate and clearly identified unit of a trade or business of a taxpayer which maintains separate books and records.”