We delve into the corporate finance report published in March by ASIC, with a focus on ASIC’s public M&A related activities over the second half of 2018 and the future areas of ASIC’s regulatory focus.

ASIC has released its bi-annual report summarising its corporate regulatory activity over the second half of 2018. This report contains key statistics and observations from ASIC’s oversights of transactions over the period and offers forward looking insights into areas of focus.

We provide some of the public M&A highlights below.

Public M&A activity over the period was high. ASIC reported 44 control transactions over the last 6 months of 2018, which represented an increase on the 29 in the previous 6 months.

Some observations worth noting from the period include: 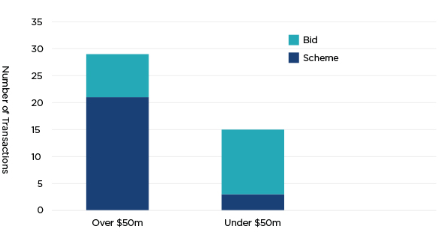 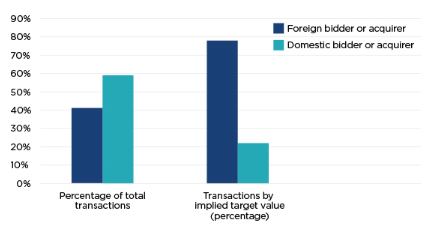 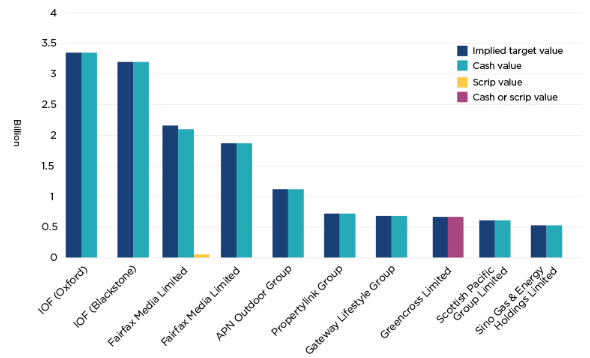 Insights from ASIC’s activity and future areas of focus

NOVEL OR COMPLEX CONSIDERATION IN SCHEMES

ASIC flagged its concerns about control transactions where the consideration offered is novel or complex.

ASIC has reiterated its intention to issue a consultation paper on this topic. It has indicated that it may consider preventing control transactions announced that use this type of arrangement before the consultation ends. See further our separate article on this topic.

Consideration that is different between certain shareholders (fairness and equality)

Where such non-traditional approaches are proposed (where target holders are offered different consideration), which is not able to be addressed through usual measures, ASIC has suggested that it should be consulted before the scheme structure is finalised.

ASIC has previously raised concerns about voting intention and other public statements. It has re-emphasised its focus on ensuring that bidders and acquirers properly recognise the limits of agreements, arrangements and understandings reached with target holders.

ASIC has noted the important role that the target board plays in a takeover. ASIC has a close focus on governance and conflicts issues that may undermine the ability of the target board to carry out its duties and thereby impact the integrity of the takeover process. ASIC has provided examples of concepts such as ‘fiduciary outs’, which ASIC closely examines as well as adequate disclosure of directors benefits. More specifically, ASIC has said that bidders and targets should:

See further our separate article on the topic of deal protections and fiduciary outs.

ASIC has also reminded market participants that contraventions of the Corporations Act in relation to a control transaction can result in criminal prosecution and imprisonment. It provided a recent example of a current matter relating to an individual who knowingly made false or misleading statements to ASIC, that is being prosecuted by the Commonwealth Director of Public Prosecutions and is listed for a hearing on 15 July 2019.