The role of critical minerals in the energy transition: A Canadian Perspective (part 5)

Fasken’s lawyers have begun a series on the role of critical minerals in energy transition from a Canadian perspective, bringing fresh insights on issues of mining, energy, environmental, Indigenous, climate change, tax, and national security. In the first, second, third and fourth instalments of this series, we examined the role of the Canadian federal government as well as the provinces of Québec, Ontario and British Columbia. In this fifth instalment, we examine the initiatives taken by the provinces of Alberta, Saskatchewan and Manitoba.

Worldwide demand for metals and critical minerals is rising due to technological advancements, growing populations, and national security. Alberta needs a modernized strategy to reflect new global conditions, capitalize on our vast resource potential, and get Albertans back to work.

The timeline indicates that the stakeholder engagement process is complete and its results are under review. Stakeholders consulted include Indigenous groups, various public institutions, non-governmental organizations, industry actors and land owners.

Alberta has also established a Mineral Advisory Council to provide strategic advice, guidance and recommendations to the government.

So far, Alberta has demonstrated interest in lithium production by giving a grant to an emerging lithium developer to fund a pilot project to unlock lithium-brine resources.

Though hydrogen is not a critical mineral, it is part of the menu of options to transition from fossil fuels, and has the potential to fuel industrial projects such as mining, and is becoming an option for light and heavy transport vehicles. Alberta is further along in developing and executing a for hydrogen production than it is for critical minerals:

In October of 2020, Alberta introduced the Natural Gas Vision and Strategy, which has a section devoted to Hydrogen. Alberta’s goal is to have Large-scale hydrogen production with carbon capture, utilization and storage (CCUS) and deployment in various commercial applications across the provincial economy by 2030. More recently, in June 2021, the Feds and the government of Alberta announced that their governments are working closely with Air Products Canada Ltd. to advance clean energy in Canada and jointly pursue a transformative $1.3 billion net-zero hydrogen production investment. The clean hydrogen facility is supposed to be operational by 2024, a first-mover anchor to secure Canada’s early foothold in the global hydrogen market. The governments have signed an MOU with the company. The plan involves the company building a new world-scale facility in the Edmonton region to produce clean hydrogen. The project would enable the production of hydrogen-fuelled electricity and provide liquid hydrogen for the transportation market and other industrial sectors.

The next step in Alberta’s plan is the development of Alberta’s “Hydrogen Roadmap”, which is supposed to be released this fall. There have been a number of hydrogen project announcements in Alberta lately. Recently, Dow Chemical announced that they will build a net-zero carbon ethylene complex in Fort Saskatchewan that will convert the off-gas into hydrogen for use as a fuel for transportation, heating and power production.

Saskatchewan does not have a formal critical minerals strategy and it has not started a process to put one together, but that does not mean that the province, as a major producer of potash and uranium, does not recognize the importance of critical minerals in the economy.

In a January 2020 PowerPoint presentation by the Chief Geologist of Saskatchewan Gary Delaney, the following list of critical mineral occurrences (22), including those for which there are reserves, resources or current/historic production, is provided: 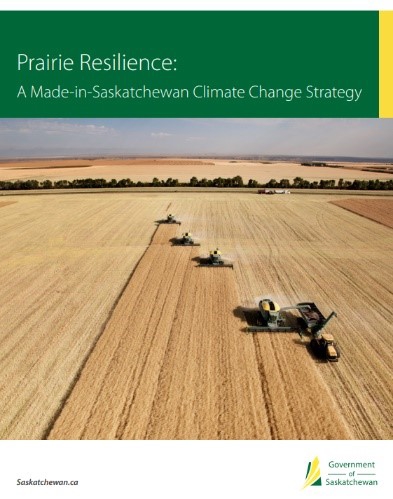 The Saskatchewan government has released Prairie Resilience: A Made-in-Saskatchewan Climate Change Strategy , a document that includes a Climate Resilience Measurement Framework and which supports the Saskatchewan Growth Plan for 2020-2030 . In the part of the strategy that is devoted to electricity, we read the following:

SaskPower has committed to reducing emissions, in part through the expansion of renewable energy sources up to 50 per cent of generating capacity. To maximize the benefits of these renewable sources, energy storage, including batteries, is needed to help meet the ups and downs of electricity demand.

Another way to reduce emissions is to modernize the electricity grid to integrate more renewable energy.

An equivalency agreement with the federal government on electricity sector emissions from conventional coal-fired electrical generation in Saskatchewan will enable SaskPower to manage reduction of its greenhouse gas emissions across its entire fleet rather than on a unit-by-unit basis.

This agreement will give SaskPower increased flexibility in operating its existing coal units, helping to maintain low rates for SaskPower customers. At the same time, SaskPower will be able to focus investment into lower emitting and renewable energy projects and agreements. These will play a key role in enabling SaskPower to achieve greenhouse gas emission reduction targets.

Actions taken on electricity generation will result in a 40 per cent annual reduction in greenhouse gas emissions from 2005 levels by 2030, representing a reduction of about 6 Mt of CO2e. [CO2 equivalent]

Manitoba does not have a specific critical minerals plan and has not undertaken to create one. However, Manitoba has deposits of copper, zinc, gold, nickel, rare metals, lithium and potash. On its website, under the heading of Mineral Commodities in Manitoba , it has this to say about critical minerals:

Critical minerals are also crucial to Manitoba’s economy and security. They fuel our society and have a variety of uses in industry, manufacturing, modern technology, and clean or low carbon technologies (e.g., solar panels, wind turbines, electric vehicles). Manitoba is well endowed in these commodities and well positioned to offer a competitive supply.

About critical minerals in particular , Manitoba says that it contains world-class deposits with high mineral potential on inexpensive and underexplored territory. Similarly, about rare metals, it adds that the province has over 40 documented rare metal occurrences associated with granitic pegmatites. With respect to lithium, it asserts that the Manitoba geologic survey is committed to improving the understanding of lithium resources in the province. 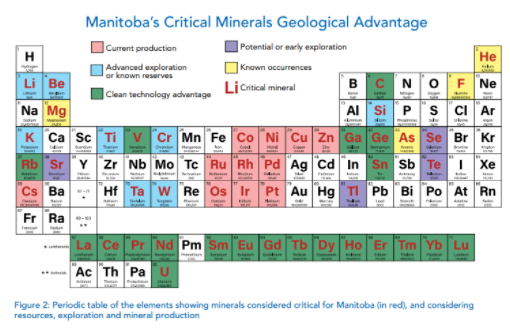 When it comes to clean energy and the transition to a low carbon economy, the province states in its Actions to Mitigate Manitoba’s Carbon Emissions and Transition Manitoba to a Sustainable, Low-carbon Economy  that “Manitoba has a clean energy advantage – an abundance of hydro power means that 99% of the electricity generated in our province is renewable. That makes our electricity grid one of the cleanest in Canada, but there are still opportunities for Manitoba to lead and to prosper in the transition to a sustainable, low-carbon economy.”

In the next section of this series, we will examine what the Atlantic Provinces, Nova Scotia, Prince Edward Island, New Brunswick, and Newfoundland and Labrador have done to catalyse the exploration and production of critical minerals.