I. New and Noteworthy

a. Petitions Relating to "Prior Express Written Consent"

Kelley Drye’s Communications Practice Group presents this tracker of active Telephone Consumer Protection Act (“TCPA”) petitions before the Federal Communications Commission (“FCC”).  With the recent increase in litigation regarding alleged violations of the TCPA, many issues relating to the interpretation of the statute have been presented to the FCC by impacted parties.  These petitions can be primary jurisdiction referrals or be presented directly by a litigant in a TCPA action.  The FCC currently has a number of petitions pending related to TCPA interpretation.  The tracker below briefly summarizes each petition and the issues presented in them. 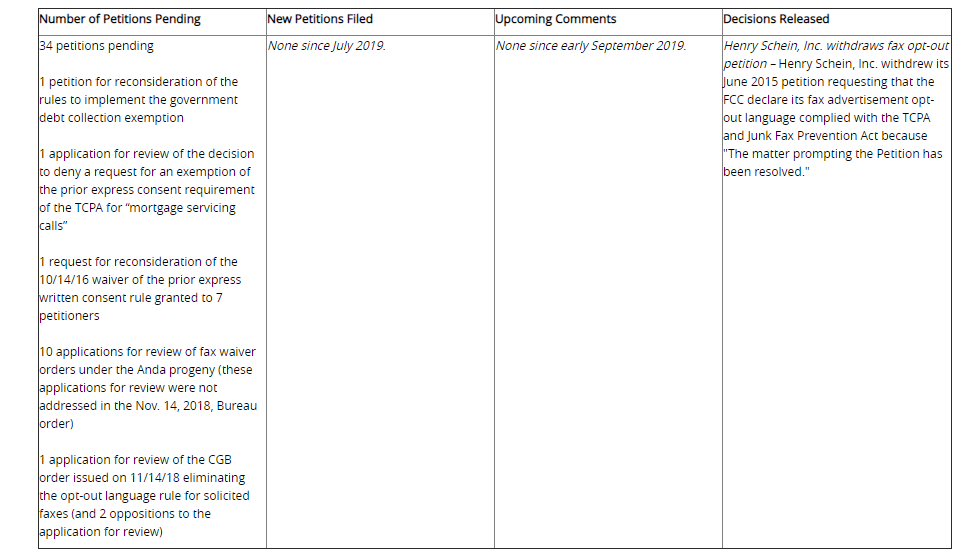 Henry Schein, Inc. Withdraws Fax Opt-Out Petition  On June 19, 2015, Henry Schein, Inc., a provider of health care products and services, filed a petition seeking a ruling from the Commission that Henry Schein's fax advertisement opt-out language used prior to September 2014 was compliant with Section 64.1200(a)(4)(iii) of the Commission's rules implementing the TCPA and Junk Fax Prevention Act. The petition primarily focused on the second requirement under Section 64.1200(a)(4)(iii)(B), which requires that the language in an opt-out request "must state that failure to comply with a validly made request is unlawful if not done within 30 days." Henry Schein argues that the Commission should rule its opt-out language ("Please allow 3--4 weeks for us to update our records") in compliance with the section because "Although the Henry Schein opt-out language does not pair the time limit with the language of legal obligation in the same sentence, the opt-out clearly communicates both the legal mandate to comply with an opt-out and the timeline to be attached to that compliance." The Commission never sought comment on the petition and on September 10, 2019, Henry Schein filed a letter withdrawing their petition because, "The matter prompting the Petition has resolved."

Other Pending Petitions Petitions are grouped by their primary subject matter. Petitions Relating to "Prior Express Written Consent"

Special Note Regarding “Solicited Faxes” Anda, Inc. Retroactive Waiver.  On October 30, 2014, the FCC released an order addressing petitions seeking clarification of the Commission’s rules requiring individuals and entities that send fax advertisements to include certain information on the fax to allow recipients to “opt-out” of receiving such transmissions in the future.  The FCC denied all of the petitions insofar as they requested the FCC to rule that the “opt out” language requirement did not apply to faxes sent with the prior express consent of the recipient, but granted a retroactive waiver to the petitioners and other similarly situated parties because the scope of the opt-out requirement was previously unclear.   Related orders granting retroactive waivers to 154 petitioners were granted by the Consumer & Governmental Affairs Bureau on August 28, 2015 (DA 15-976), December 9, 2015 (DA 15-1402) and November 2, 2016 (DA 16-1242).  Seven applications for review of the August 28, 2015 order and three applications for review of the November 2016 order were filed in the TCPA docket.  The Commission has not responded to these applications for review. Bais Yaakov of Spring Valley Appeal and Subsequent Orders.  In March 2017, the D.C. Circuit Court of Appeals ruled that the FCC lacked authority under the TCPA to adopt the “Solicited Fax Rule” (requiring opt-out language on faxes sent with the recipient’s prior express consent) and vacated the Anda order.  Bais Yaakov of Spring Valley, et al. v. FCC, 852 F.3d 1078 (D.C. Cir. 2017).  On November 14, 2018, the FCC’s Consumer and Governmental Affairs Bureau issued an order eliminating the FCC rule that required opt-out consent language on faxes sent with prior express consent (aka “solicited faxes”).  Rules and Regulations Implementing the Telephone Consumer Protection Act of 1991, Order (DA 18-1159).  The Bureau stated that the decision was required by the “non-discretionary mandate” of Bais Yaakov.  The Bureau also dismissed as moot 10 pending requests for waiver of the rules and two petitions for reconsideration of retroactive waivers previously granted by the Bureau.  However, the ten applications for review of the Bureau waiver orders (see above) are pending before the full Commission and could not be addressed by the Bureau on delegated authority.  On December 14, 2018, a group of TCPA plaintiffs filed an application for review asking the full Commission to vacate the CGB order.  Two oppositions to the application for review were filed on December 31, 2018.  The FCC has not yet responded to any of these filings.