We’ve previously blogged about COVID-19-related adjustments in connection with the presentation of non-GAAP financial measures, including the difficulty that some public companies may have in reasonably quantifying the extent to which incremental expenses were driven by the COVID-19 pandemic as opposed to other factors.

This recent SEC comment letter exchange hits on this topic and asks the registrant for more information concerning an adjustment to its non-GAAP net income titled “COVID-19 shelter in place restrictions on manufacturing activities.” For reference, the applicable earnings release at issue is linked here. The SEC Staff appeared to accept the company’s response as no further comments on this topic were issued, and the registrant continued to include this adjustment in its next quarter’s earnings release.

The Company included the adjustments to its non-GAAP results as the charges resulted from the Company’s inability to operate its manufacturing activities during these days as a result of restrictions imposed by local or other governments. The Company had not closed its manufacturing operations or had production adversely impacted previously as a result of local government restrictions on employee movements and does not expect to incur such costs again during the next two years after the COVID-19 pandemic has passed. The Company’s adjustment included amounts that could be objectively quantified and excludes other operational costs (e.g., increased transportation and warehousing costs, increased cleaning costs, lower production levels and inventory markdowns) that could not be clearly separated from business conditions, changes in demand or Company actions.

When the error is material, the financial statements can no longer be relied upon and will need to be restated, which is sometimes called a “Big R restatement.” A Big R restatement usually requires a registrant to do the following:

When the error is immaterial, generally, the error may be corrected in a future 10‑K or 10‑Q, which is sometimes called a “Little r restatement.”

The registrant’s first response letter is linked here and the relevant comment/response is repeated below:

1. We note that you corrected an error related to the year ended December 31, 2017 you believed to be immaterial in the current December 31, 2019 10-K. As the quantitative disclosures on page 44 indicate that the change increased your net loss in 2017 by over 50%, it is unclear why you believe such error to be immaterial. Please provide us with your full materiality analysis and tell us your consideration of amending your December 31, 2017 10-K as well as filing an Item 4.02 8-K that such financial statements should no longer be relied upon. We may have further comment after review of your response.

The Company conducted an analysis under Staff Accounting Bulletin No. 99 and Staff Accounting Bulletin No 108 when the error was identified in the second quarter of 2019, and have included below both the quantitative and qualitative factors that we analyzed. Our analysis resulted in the conclusion that the adjustment was not material for the period ended December 30, 2017 (or any subsequent period until the adjustment was made).

In summary, the error identified had the following impacts to the financial statements for the year-ended December 31, 2017, with similar balance sheet impacts in subsequent periods through the date the error was corrected. 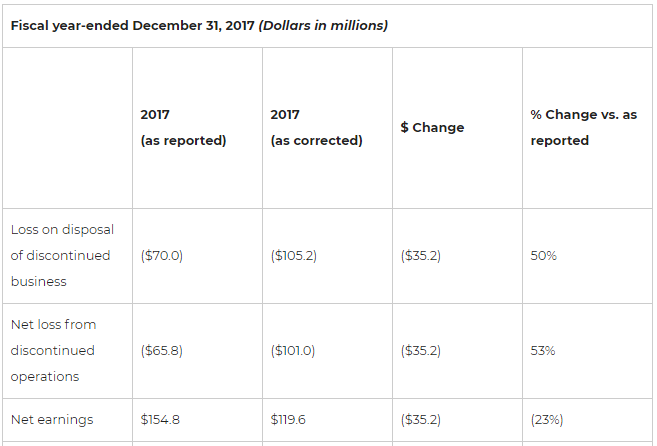 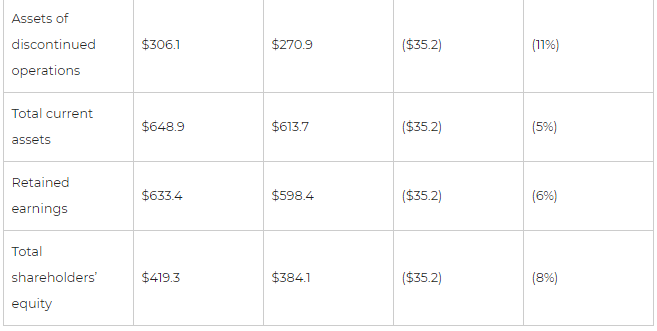 In addition to the above, for the period ended September 30, 2018 through the date of correcting the error, the adjustment also resulted in a reclassification within the Accounts payable and accrued expenses footnote of $35.2 million, within continuing operations, as a result of our receipt of advance cash proceeds from the buyer.

In addition to the quantitative impact, management considered the impact of the error from a qualitative standpoint, and concluded the following:

While we acknowledge that the error is quantitatively large, we gave specific consideration to the nature of the line items impacted, notably the results of discontinued operations (with the exception of the reclassification within the Accounts payable and accrued expenses footnote effective in the September 30, 2018 10-Q). We had evidence (with the benefit of hindsight) that analysts and investors have not focused on the results of the discontinued operations in 2017 or any period since. When concluding that a restatement was not required, we also took into account the fact that the 2018 interim and annual financial statements and the Q1 2019 interim financial statements, which were more current and relevant to users today than the older period of 2017, and these more recent financial statements were primarily only impacted on the balance sheet. We also considered our liquidity situation in 2017 and subsequent periods and concluded that the unrecorded adjustments to the non-cash impairment loss did not materially impact our cash and liquidity metrics. Finally, but importantly, we believe that when a business is being discontinued and disposed of, investors and other financial statement users are more interested in the amount of cash that will be received upon sale (and perhaps how and where that cash may be reinvested in the business) and less interested in the amount of any non-cash impairment loss that results when the business is classified as held for sale.

Based on the foregoing quantitative and qualitative analysis, management concluded that the previously issued annual and interim financial statements (included in the 2017 Form 10-K through the Q1 2019 Form 10-Q) were not materially misstated and did not require restatement. Management concluded that there was not a substantial likelihood that the error would have been viewed by a reasonable investor as having significantly altered the total mix of information made available. We determined that the historical error would be corrected in our June 30, 2019 Form 10-Q as an immaterial correction of prior period financial statements.

We also discussed the accounting, financial reporting, and disclosure considerations associated with this adjustment with external SEC counsel, our independent auditors and the Audit Committee of our Board of Directors, each of which supported management’s conclusions.

The SEC Staff considered the registrant’s response but ultimately disagreed with its materiality conclusion. However, the registrant continued to push back on the Staff’s request for an Item 4.02 8-K in this situation because the financial statements contained in the registrant’s 10-K filing for the year ended December 31, 2019 already included the financial impact of the error correction for all years presented in the 10-K. The SEC Staff appeared to accept the registrant’s position on this as no follow-up or 4.02 8-K was issued. The company’s second response letter is linked here, and the relevant comment/response is repeated below.

We note the staff’s conclusion and although, as we have discussed and outlined in our prior responses, we believed our approach disclosing the information related to the error in our previously filed Form 10-K for the year ended December 31, 2019 was appropriate, we will file a Form 10-K/A for the year ended December 31, 2019 to provide the requested information. As discussed with the staff, however, we do not believe that an Item 4.02 Form 8-K is required to be filed under these facts. The revisions that will appear in our Form 10-K/A will provide additional disclosures, including references that the error was material, and a revised audit report to make reference to the restatement. The financial statements contained in our original Form 10-K filing for the year ended December 31, 2019 already included the financial impact of the error correction for all years presented. As a result, we do not believe that these additional disclosure changes would result in the original Form 10-K being deemed unreliable. Accordingly, we believe that our previously issued and corrected financial statements can continue to be relied upon and, as a result, no disclosure under Item 4.02 of Form 8-K is required.

For additional information on restatements, including 2019 trends, see today’s blog over at corporatecounsel.net, link here.

More so for interesting reading rather than practical application, this comment letter exchange between the SEC Staff and The Republic of Korea is pretty fascinating to the outside observer. While securities of the U.S. federal government are exempt from the registration requirements of the Securities Act, a foreign government cannot sell its securities to the U.S. public without registering the offer and sale. The applicable form for this foreign government debt offerings is a Schedule B.

Similar to the business discussion of a corporate issuer, South Korea’s Schedule B includes a general discussion of the country, including sections titled “Land and History,” “Government and Politics,” “The Economy,” “Principal Sectors of the Economy, “The Financial System, “Monetary Policy, “Balance of Payments and Foreign Trade,” and “Government Finance.” It would be quite interesting to read the disclosures of our own government if they were called to prepare its own Schedule B prospectus and held to the same disclosure standard and liability.

The SEC Staff’s comments are repeated below.

1. Please update any future filings, as necessary, to include any material updates relating to the impact of COVID-19.

The Registrant acknowledges this comment to update any of its future filings, as necessary, to include any material updates relating to the impact of COVID-19.

2. Please update your discussion, as necessary, to reflect any material recent developments in your relations with North Korea.