Smart city initiatives in Latin America have too often been overshadowed by high-profile projects in North America. But the tide is changing, and smart city projects throughout the region are gaining traction like never before

Smart city initiatives in Latin America have too often been overshadowed by high-profile projects in North America. But the tide is changing, and smart city projects throughout the region are gaining traction like never before.

street lights in Rio de Janeiro, Brazil, will be replaced with high-efficiency LED bulbs as part of the city's Smart Rio Project

Smart city initiatives in Latin America have too often been overshadowed by high-profile projects in North America and Europe.

However, as the world emerges from the COVID pandemic, and climate change and public health move up the policy agenda, smart city initiatives are now gaining new traction across Latin America.

The "smart city"—a concept that puts people and quality of life at the center of urban development through the use of technology and improved data collection and analytics—has been gaining increasing traction in Latin America as governments look for ways to improve the way the region’s burgeoning urban centers are run.

Santiago, Chile, is home to the largest feel of electric buses outside of China, with a fleet of 411 battery-powered electric buses, as of June 2020 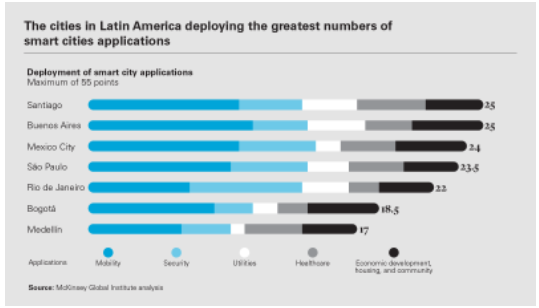 Providing a pathway to sustainability 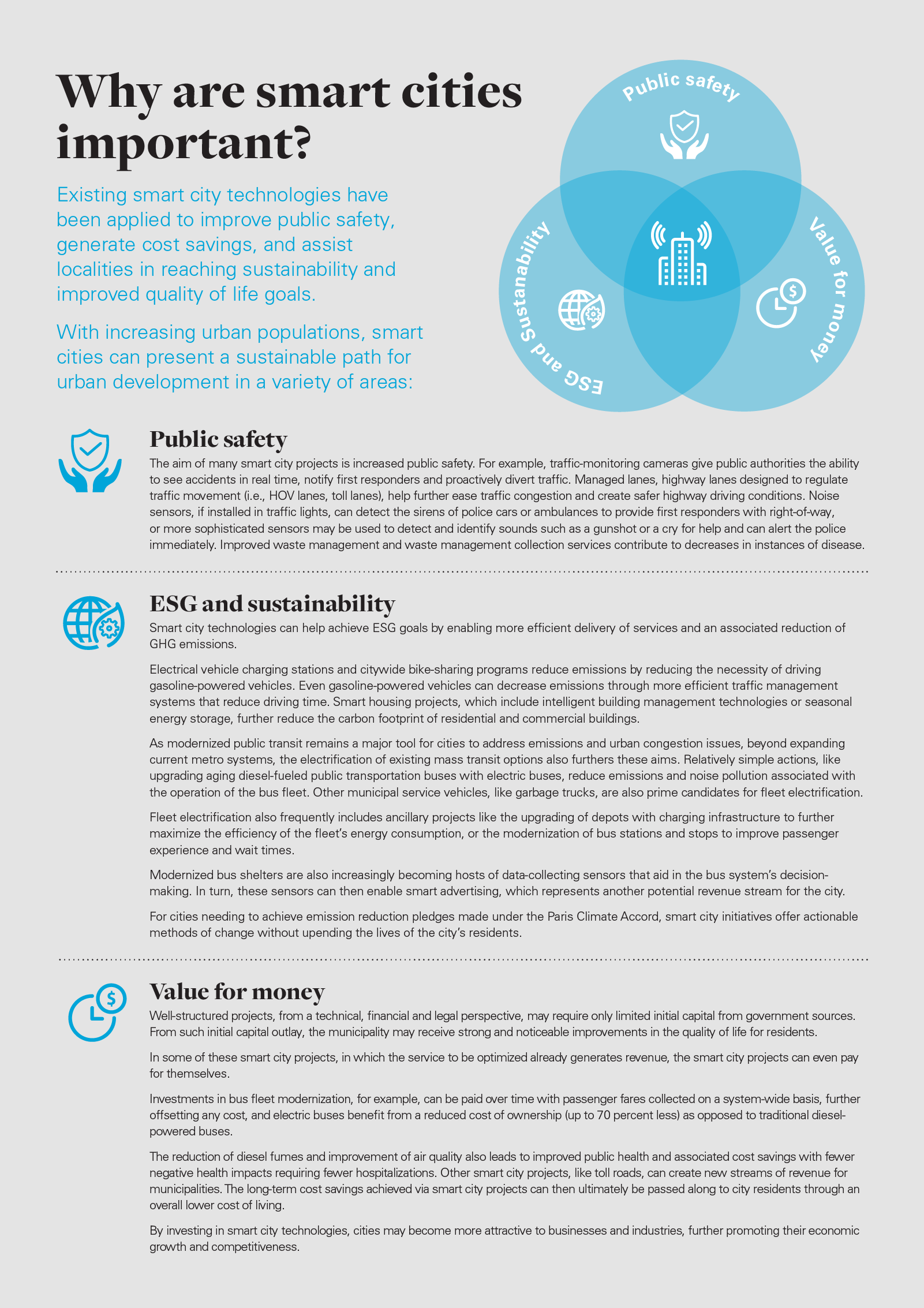 The city of Rio de Janeiro, for example, has launched the Smart Rio Project, which will include a program to modernize the city’s public lighting system that, upon completion, is expected to improve public safety by reducing driving accidents and street crime.

The Rio lighting project will have far-reaching sustainability impacts too by decreasing energy use by up to 60 percent, as well as mitigating light pollution and sky glow. It has also delivered strong value for money, as the costs of the project will be covered by the lower operational costs over the lifetime of the operation of the infrastructure and a pre-existing public lighting tax.

The cities of Santiago in Chile and Bogotá in Colombia, meanwhile, have seen significant improvements in air quality and emissions reductions by replacing legacy diesel-fueled public bus fleets with electric buses. In the same way as the lighting project in Rio, the operational costs of an electric bus fleet can be as much as 70 percent lower than diesel alternatives over the life of the fleet, reducing the need for municipal budget or tax increases to fund the transition.

Chile has also upgraded its street lighting network to less-consumptive LED technology and installed energy-efficient water heating systems, while Colombia has installed sensors that monitor rainfall, water levels and soil movement to detect areas that are at risk of flooding.

Cable cars operating in the mountainside areas of Medellin, Columbia, have lowered the commute time to the city center from two hours to 20 minutes 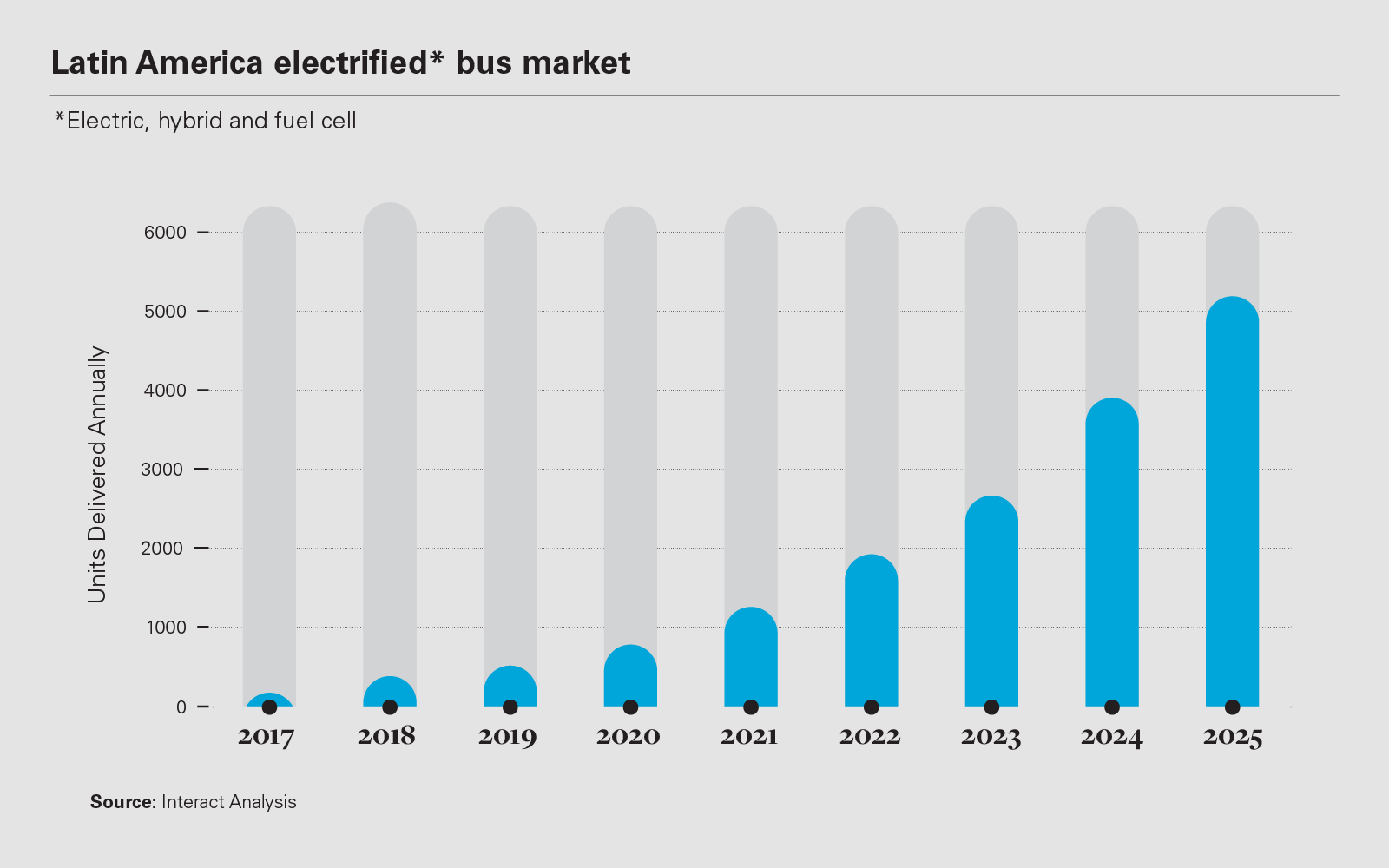 The benefits that smart city initiatives in Brazil, Chile, Colombia and Panama have delivered are evident, but despite these success stories, smart city projects are not yet widespread in Latin America.

Smart city projects in the region still face secular headwinds, most notably the complexities of working with governmental agencies and municipalities to create bankable projects that present attractive opportunities for investors.

Smart city projects typically require a substantial upfront investment that must be either funded by governments—and ultimately paid for by the public via taxes or end-user costs—or financed privately. International development finance institutions and banks may also offer loans, grants and guarantees through specialized programs focused on urban and environmental sustainability.

Often, the government pays to construct and operate a service either by increasing taxes to fund such construction, or it recovers its investment by passing on the costs to the public through end-user fees. Reduced operating costs over time can cover initial investment, but municipalities will often have to finance smart city infrastructure with large upfront sums before recouping this initial outlay.

Chile’s smart energy meter program is a prime example of the difficulties of passing on the cost of infrastructure upgrades to the public. In 2019, public outrage over the fact that end-user consumers would be paying for new smart meters led the government to halt their ambitious project of deploying them throughout Santiago.

Chile’s smart meter program deployment also demonstrates the importance of coordinated and phased implementation of smart city solutions in order to allow cities to adjust and fix imbalances as they present themselves without serious disruption to the public service offered.

Sourcing private funding comes with difficulties too. Projects may employ first-of-its-kind technologies without demonstrable proof of concept or limited testing. Such early adoption of new technologies may present a drawback for investors’ confidence.

Additionally, while there may be a clear positive socioeconomic impact, it may be difficult to ascertain the value of that benefit. Cities must leverage and promote the high value for money, overall lower cost of living, and reduced environmental impact that result from smart city investments to win public and investor support. Indeed, by investing in smart city technologies, cities may become more attractive, further promoting economic growth.

Rolling out smart city technologies may be critical for some municipalities’ ability to tackle pressing challenges of today, like improving public safety and health, environmental sustainability, and overall quality of life 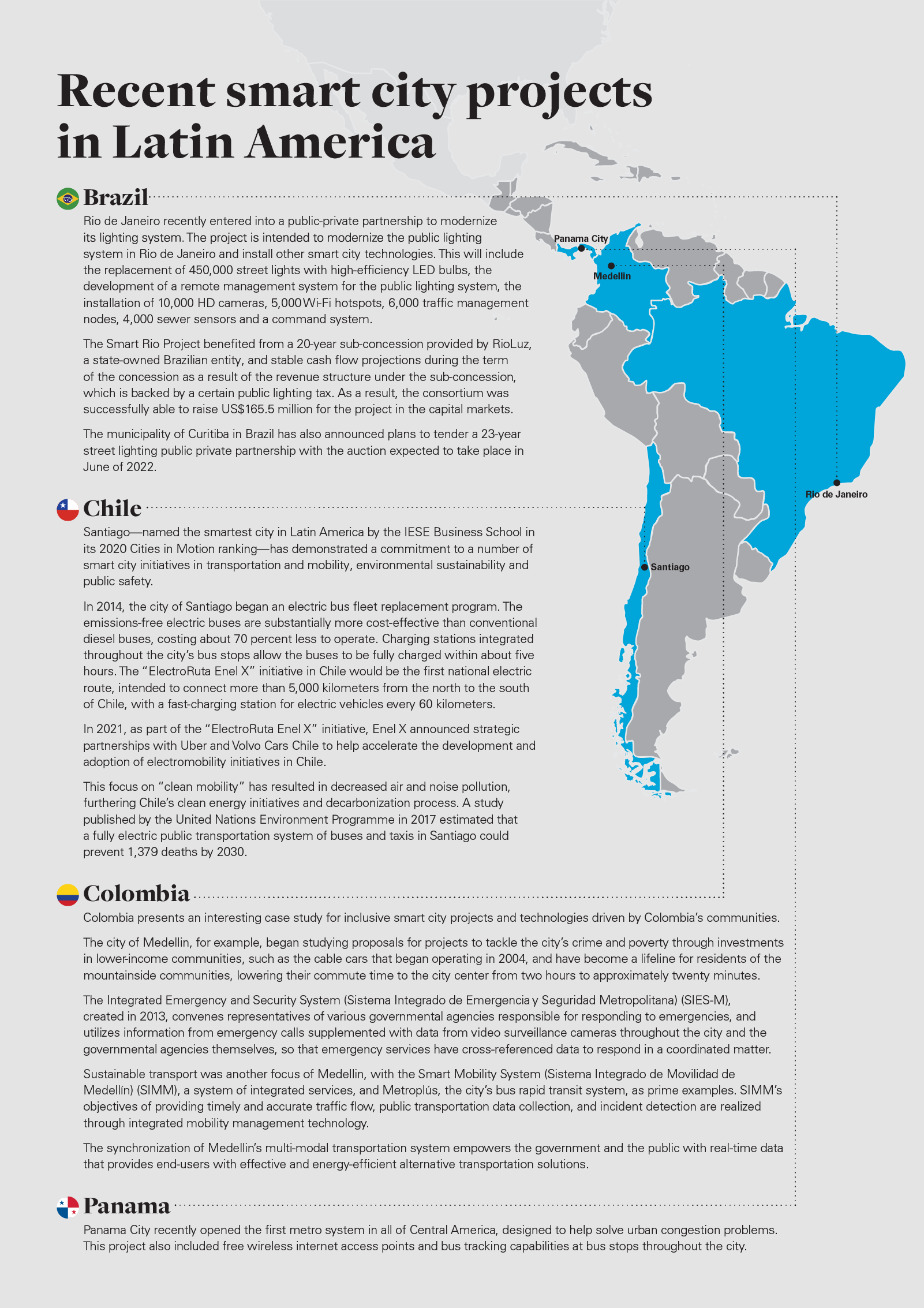 The way of the future

For all these challenges, however, Latin American policymakers have recognized that by utilizing technology and innovation to optimize the allocation of resources and provide the government with detailed and precise data, smart cities deliver smarter and more efficient management.

While there are a few exceptions, smart cities are not yet being executed at scale in Latin America. However, the drive to meet ESG goals, create energy efficiencies, and increase public safety should incentivize the private sector as well as national and local governments in the region to further explore smart city technologies. Governments and cities could even aggregate multiple projects in particular countries to create economies of scale for prospective investors.

Smart cities provide clear benchmarks and performance indicators for policymakers to track and evaluate potential improvements. Most importantly, rolling out smart city technologies may be critical for some municipalities’ ability to tackle pressing challenges of today, like increasing public safety and health, environmental sustainability, and overall quality of life.

The case for large-scale investment in smart city initiatives throughout Latin America has never been stronger.