The term “trademark” has historically been associated with name brands, logos, and distinctive packaging. But businesses are pushing the boundaries of what constitutes a “trademark” to engage all the consumers’ senses—scent, taste, sounds, touch and (of course) sight.

Today’s barrage of online advertising has made it harder for businesses to capture consumers’ attention. So, businesses are moving beyond traditional branding methods and becoming more creative in their marketing efforts. However, this begs the question, what can be legally protected by trademark law?

Though legislation was careful not to exclude the possibility of protecting nontraditional marks, it was first seriously discussed by the U.S. Supreme Court in Qualitex. The court read the statutory language of the Lanham Act to be non-restrictive when it defined a trademark as “any word, name, symbol, or device,” suggesting that “almost anything at all is capable of carrying [trademark] meaning.”

According to the U.S. Patent and Trademark Office, such nontraditional “sense” marks can only be eligible for trademark protection if they meet two tests:

The whiff of a familiar smell can transport consumers to another time and place. The smell of clean laundry and cooking can remind you of home, and pine scents can remind you of a hikers are eager to capitalize on such positive memories by associating them with their products.

Recently, Hasbro successfully registered the “sweet, slightly musky, vanilla fragrance, with slight overtones of cherry, combined with the smell of a salted, wheat-based dough” for its PLAY-DOH product. After over-nighting a container of the modeling clay to the PTO, Hasbro successfully demonstrated to the PTO that the scent had acquired consumer secondary meaning through its exclusive and continued use since 1955. This landed PLAY-DOH a highly coveted trademark registration for its scent mark.

Similarly, Grendene S.A. proved to the PTO that its bubble gum-scented MELISSA sandals possessed secondary meaning and could be registered as a trademark. It offered 26 exhibits showing advertising highlighting the scent, as well as nationwide media coverage of this unique olfactory feature. Grendene also submitted as evidence a Google search for “bubble gum scent shoes” where nine out of the 10 results were about its product.

In contrast to scents associated with molding clay and shoes, perfume and cosmetic fragrances or food aromas are unlikely to ever be registered as trademarks due to their innate utilitarian functionality. This point was illustrated by Pohl-Boskamp GmbH & Co. KG’s failed attempt to register the scent and flavor of peppermint for its pharmaceutical “nitroglycerin lingual spray.”

The PTO held that consumers are not predisposed to use scent and flavor as trademarks for products that are ingested. Further, other competing peppermint-scented and flavored products precluded Pohl-Boskamp from establishing exclusive consumer secondary meaning in the scent.

A small number of applications have been submitted to the PTO for taste marks such as an orange flavor for quick dissolving anti-depressant tablets, and the flavor combination of “lavender, mint, lemon grass, and thyme” for non-alcoholic beverages. All of these applications failed the functionality test, however, because flavors make medication easier to tolerate and beverages more enjoyable to drink.

Like scents, sounds can immediately convey a positive feeling for consumers that brand-owners hope to capture as trademarks. Successful sound trademarks can be either mechanical sounds or musical sounds.

Eyeglass manufacturer Sutro Product Development Inc. registered a sound mark comprised of “[a] series of three, regularly spaced, repeated clicks, wherein the clicks resemble the sound of a small object striking another metal object.” Specifically, the sound was created by friction in the hinges of their glasses.

The registration was only issued, however, after Sutro overcame a functionality refusal by showing that competitors could make a hinge that featured similar advantages but with a different sound or no sound at all.

Recently, Zippo, the American lighter company, secured a trademark registration for the Zippo lighter’s “click.” which, according to their application, “consists of the sounds of a windproof lighter opening, igniting and closing.” To establish secondary meaning, Zippo provided extensive evidence of consumer and industry recognition of the sound of the click through tweets and Facebook posts, cameos in movies, news articles, and declarations from tobacco professionals.

Additionally, Apple Inc. registered a musical sound mark for the start-up chimes that each of its computers featured.

Consumers may also come to use the look and feel of unusual motions associated with a product as a trademark.

For example, Lamborghini successfully registered as a trademark “the unique motion in which the door of a vehicle is opened. The doors move parallel to the body of the vehicle but are gradually raised above the vehicle to a parallel position.”

For a motion mark, the PTO requires that the drawing accurately and sufficiently depict the motion so as to show how the motion is used in connection with the goods or services.

In Lamborghini’s case, the carmaker submitted four freeze frames drawings depicting the doors at different intervals of the motion. (Illustration shown below) 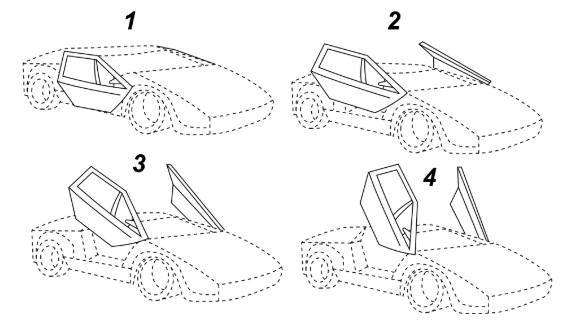 As with other sensory marks, motions are not eligible for trademark protection if they are functional. This is illustrated by Loggerhead Tools LLC’s unsuccessful attempt to register the “iris-type” motion of “six rectangular-shaped jaw-like elements of the circular head of a hand tool radially move in and out.” (Illustration shown below)

Unfortunately for Loggerhead Tools, a utility patent disclosing a motion is considered evidence of functionality, and its utility patent for the technology featured language that mirrored the description of the motion in its trademark application.

Further, Loggerhead’s promotional materials touted the utilitarian advantage of the tool’s motion: “The Bionic Wrench is a remarkable patented hybrid of an adjustable wrench with the ease of use of a pair of pliers. In addition, the genius of attaching a bolt/nut on all 6 flat sides removes the stress and strain on the corners of the bolt.”

As a result, the PTO found Loggerhead Tools failed the functionality test.

While applicants face a heavy burden in proving that their sensory marks are both nonfunctional and have consumer secondary meaning, the rewards of owning a unique protectable sensory mark can be great. Smells, sounds, and unusual motions can make a product stand out from its competitors and be instantly recognized by consumers.

Fortunately, as illustrated by the successful cases discussed above, the burden is not insurmountable. By highlighting the sensory mark in advertising so that consumers look for the claimed sound, scent, or motion, a brand owner can lay the foundation for establishing consumer secondary meaning. And, by being careful to avoid statements that the sensory feature has utilitarian value or makes the product function better, the brand owner may be able to avoid a problem with the functionality test.

With careful planning, sensory marks can be as fully protectable and valuable as traditional word marks and logos.