Open Banking - Where are we up to?

On 1 July 2019, the Federal Government launched its pilot program for Open Banking, involving the big four banks. Under the pilot program, ANZ, CBA, NAB and Westpac are required to share generic product data as the first step in testing the performance, reliability and security of the Open Banking system.

Under the revised implementation timeline announced by the Treasurer late last year, the official launch date for Open Banking was delayed by seven months to 1 February 2020. For more details, see our previous insight “Launch of Open Banking delayed” here.

This Insight looks at what has happened over the last six months and considers where Australia is up to with the launch of Open Banking.

The Treasury Laws Amendment (Consumer Data Right) Bill 2019 (the Bill) was introduced into Parliament on 13 February 2019, proposing to amend the Competition and Consumer Act 2010, the Privacy Act 1988 and the Australian Information Commissioner Act 2010 to establish a Consumer Data Right (CDR).

However, the Bill lapsed on 11 April 2019 when the House of Representatives was dissolved ahead of the federal election. A new bill will need to be re-introduced into Parliament to establish a CDR. It is open to the Government to either introduce the same Bill, or to make amendments before re-introducing it into Parliament

On 31 May 2019, the Consumer Data Standards Body released a third working draft of the technical standards that will allow consumers to access and share data via application program interfaces (API) with accredited third parties under the CDR regime (draft CDR Standards).

Working groups have also been established to support designing and testing the draft CDR Standards. Input from the working groups and an Advisory Committee, as well as guidance materials, API specifications and implementation materials are being shared by the Consumer Data Standards Body on its website and Git Hub.

Once the Bill has passed Parliament, section 56BA will allow the ACCC to make rules relating to the operation of the CDR in designated sectors of the economy.

On 29 March 2019, the Australian Competition and Consumer Commission (ACCC) released an exposure draft of the rules that it proposes to release under section 56BA of the Bill, the Competition and Consumer (Consumer Data) Rules 2019 (draft CDR Rules). The ACCC received a number of submissions as part of the public consultation into the draft CDR Rules.

In addition to making rules to implement and govern Open Banking, the ACCC will also have a role in accrediting entities to receive data (as the Data Recipient Accreditor under section 56CG of the Bill) and managing an online register of accredited data recipients and data holders (CDR Register) (as the Accreditation Registrar under section 56CK(1) of the Bill). The ACCC has made available the CDR Register for public consultation.

Once the Bill has passed Parliament, section 56AC(2) will allow the Treasurer to designate a sector of the economy as subject to the CDR. The first “designated sector” subject to the CDR is the banking industry.

 The second and current consultation on a revised draft of the Designation Instrument commenced on 14 June 2019 and will close on 12 July 2019.

Open Banking will commence the day after the Designation Instrument is registered.

The Designation Instrument specifies that three classes of information or data are subject to the Open Banking regime.

Data not subject to Open Banking

The Designation Instrument specifies that two classes of information or data are excluded from the Open Banking regime.

Section 9 of the Designation Instrument provides that certain credit information such as court proceedings, information, personal insolvency and serious credit infringements will be excluded from Open Banking.

The revised draft of the Designation Instrument currently under consultation responds to concerns raised during the first consultation about the scope of Product Use Data by excluding “materially enhanced information” from the Open Banking regime. Section 10 provides that data holders will not have an obligation to disclose “materially enhanced information”.

 information derived from product use data (source material) that has undergone insight or analysis by the entity who holds the data;

 to make the information significantly more valuable than the source material in terms of usefulness, useability or commercial value.

However, materially enhanced information does not include information which is publicly available or that is required to be disclosed to a customer (or a class of persons which includes the customer).

Treasury makes it clear in its “Summary of proposals – Open Banking Designation Instrument” that the data sets currently in the draft CDR Rules and draft CDR Standards do not meet the test of having been materially enhanced and therefore are subject to the Open Banking Regime.

The Explanatory materials and the revised draft of the Designation Instrument outline examples of data that are and are not materially enhanced. 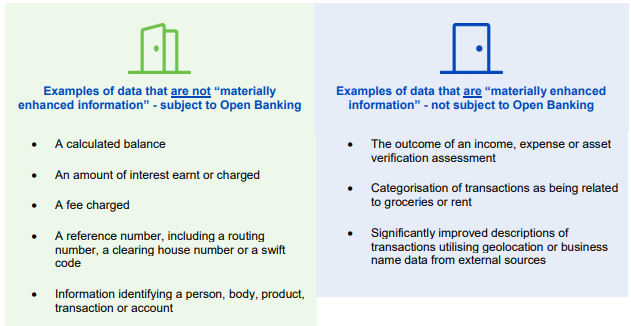 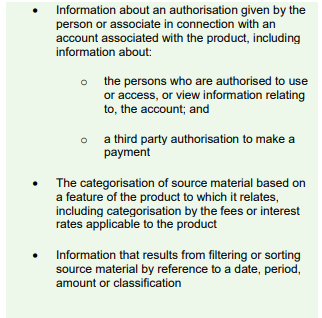 The revised draft of the Designation Instrument does not specify that any classes of information or data are subject to fees. As a result, customers will not have to pay fees under the Open Banking regime as they will be accessing “fee-free CDR data” under section 56AM(4) of the Bill.

However, it may still be possible for fees to be charged in scenarios where:

 data holders choose to provide additional data beyond the functional requirements set out in the CDR Rules and CDR Standards (i.e. beyond the scope required under Open Banking); or

 the Minister determines in the Designation Instrument that a reasonable fee is suitable in the future. Sections 56AD and 56AE of the Bill provide that the Minister can only make this determination after seeking the ACCC’s advice, which it will give following a public consultation and an assessment of the impact on consumers.

The Open Banking regime will be a dramatic departure for market participants in Australia. What remains unresolved is the scope of the obligations and reciprocity required to benefit from the CDR regime. There is also likely to be significant debate around what is materially enhanced and what is not (eg, what is the difference between categorisation and filtering in the examples above.

While we are edging closer to a CDR, there remain significant issues to resolve to ensure a fair balance between contributors and recipients.