How Do You Calculate Severance Indemnity if an Employee Is Dismissed During a Temporary Period of Reduced Working Hours?

It is important for employers to know how they should calculate a former employee’s severance indemnity. So what happens if an employee is dismissed while temporarily working reduced hours (e.g., as a result of parental leave, time credit, career reduction, etc.)? This question has been discussed in several Belgian court judgments, but the recent ruling of June 22, 2020 by the Belgian Supreme Court has not led to greater clarity.

The main question is: Should the severance indemnity be calculated on the basis of the reduced salary as it was at the time of the dismissal, or on the basis of the fulltime salary which the employee would be entitled to before and after the period of reduced working hours?

In a recent ruling of June 22, 2020, the Belgian Supreme Court annulled a decision of the Mons Labor Court of Appeal in a case concerning an employee who was dismissed while on part-time time credit in order to take care of her child. According to the Belgian Supreme Court, the employer should have calculated the severance and protection indemnity on the basis of the salary that the employee would have received if she had not temporarily reduced her work performance (i.e., the fulltime salary that applied prior to the work performance reduction). According to the Belgian Supreme Court, a calculation on the basis of the reduced salary constitutes an indirect discrimination based on sex, as more women than men are likely to take up time credit in order to take care of children. The Belgian Supreme Court referred to Article 157 of the Treaty on the Functioning of the European Union, which lays down the principle of equal pay for male and female workers for equal work or work of equal value.

This recent ruling of the Belgian Supreme Court is, however, in contradiction with a 2019 ruling of the Belgian Constitutional Court (see chart below). In this earlier judgment, the Court found in a similar case involving time credit for childcare that it was not unconstitutional to calculate the severance indemnity on the basis of the reduced salary of the employee concerned. In summary, the Belgian Constitutional Court reasoned that employees had a “free choice” to take such leave (contrary to, for instance, employees who take palliative leave, which the Court considered to be a form of “forced” leave).

Conclusion: Because of the contradictory nature of these rulings by the Belgian Supreme Court and the Belgian Constitutional Court, uncertainty remains as to how to calculate the severance (and protection) indemnity where an employee has reduced their working hours to take care of a child. Neither ruling prevails over the other, and so it remains to be seen what position the lower labor courts will take. Although arguments can still be developed in favor of the ruling of the Belgian Constitutional Court, there is now a risk that lower labor courts will follow the decision of the Belgian Supreme Court and rule that the severance and protection indemnity should be calculated on the fulltime salary. 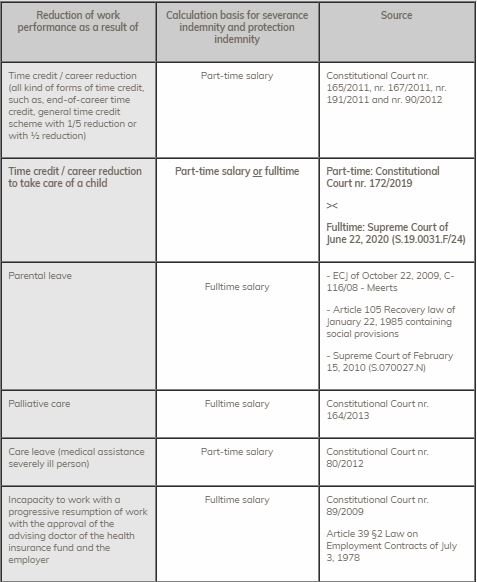