On 21 February 2020, the Securities and Futures Commission ("SFC") published its latest Quarterly Report, summarising the key developments from October to December 2019.

As reflected in the Quarterly Report, the SFC remained active in its regulatory activities, with a notable enforcement focus on record-keeping, online trading, dealing malpractices and anti-money laundering (“AML”) controls, as well as a 61.2% increase in the number of individuals and corporations subject to civil proceedings, various of which involved breaches of duties by supervisors and directors.

Overall, the key focus areas of the SFC’s activities fall within the following six categories:

Some particular highlights of the quarter include:

The table below, as provided in the Quarterly Report, details the numbers and the types of breaches that were noted during SFC’s on-site inspections. 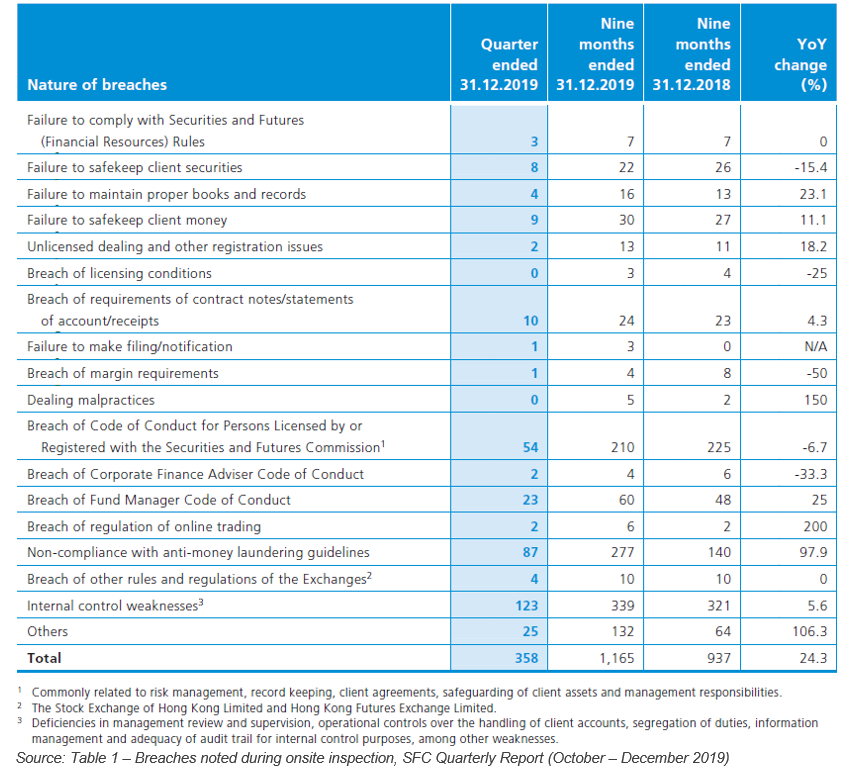 Various types of breaches have increased in numbers as compared with the third quarter. They include, but are not limited to, breaches of client money and securities handling, online trading regulations and the Fund Manager Code of Conduct, and internal control weaknesses. Indeed, online trading has become very common nowadays. Heightened monitoring and regulation of online trading can be anticipated.

What has been consistent throughout the year of 2019 though is that internal control weaknesses remain the most prevalent type of breach found among licensed corporations, followed by non-compliance with anti-money laundering guidelines, unauthorised trading and breaches of the Code of Conduct for Persons Licensed by or Registered with the SFC. In fact, out of the total fines of over HK$413.3 million imposed by the SFC in the final quarter, HK$408.8 million resulted from disciplinary actions concerning internal control weaknesses.

The year-on-year change figures also confirm the SFC’s regulatory focus. Indicated in the Quarterly Report are a year-on-year 100% surge in the number of notices of proposed disciplinary actions issued by the SFC to regulated persons and a year-on-year 61.2% rise in the number of individuals and corporations subject to ongoing civil proceedings. Statistics demonstrated that the SFC has little hesitation in stepping up on their enforcement actions, holding licensed corporations and individuals accountable for non-compliance and misconduct.

As an example of the SFC’s increasing focus on personal accountability and corporate governance, the SFC recently obtained a compensation order from the court against a former chairman and executive director of a listed company for losses due to his misconduct. He was ordered to compensate the group’s wholly-owned subsidiary RMB20.3 million and, together with three other former executive directors, disqualified from being a director or being involved in the management of any listed or unlisted corporation in Hong Kong for up to six years.

In a few other cases, the SFC separately commenced High Court proceedings and obtained disqualification orders against former chairmen and executive directors of listed companies for breach of fiduciary duties and failure to exercise due and reasonable skill, care and diligence. These suggest that the SFC is more prepared to intervene if they have serious concerns over the conduct of the management of listed entities, which echoes the SFC’s recent emphasis on corporate governance. This is also especially significant as Hong Kong has very few cases involving directors’ duties under the general companies legislation, so the ripple effect on regulated entities’ directors is likely to be considerable.

We also identify a number of key SFC developments over the quarter:

Together with the position paper, the SFC issued a set of pro forma terms and conditions for platform operators.

Notwithstanding the decrease in the number of inspections initiated by the SFC in the final quarter in 2019, the breaches noted, and the fines imposed, by the SFC are no less substantial. These seem to manifest a more targeted intervention and impactful regulation which evidence the “front-loaded” approach of the SFC.

More broadly, the Quarterly Report offers a glimpse into the SFC’s priorities and areas of focus. It is evident from the statistics and developments that internal control weaknesses remain a focus, as do AML controls and practices. The SFC also continues to enhance its regulatory framework in line with market conditions and technological development – a trend that may continue through the course of the year.

All these point to the need to keep controls up-to-date and relevant. Audits and investigations are especially painful when compliance policies and procedures are outdated or (worse) merely lifted from overseas branches without proper localisation. They can also prove expensive to remediate, particularly when coupled with audit / investigation-related costs and fines.

There is also a strategy in dealing with regulatory notices and self-identified breaches and weaknesses – please speak to us anytime if you need support.

How to overcome trademark challenges in South Africa