Complying with the new rule will require significant effort, but the underlying substance is not entirely new. Most of the information is already provided in the proxy statement and financial reports; and during the twelve years since Dodd-Frank became law, shareholder advisory services (such as ISS and Glass-Lewis) have refined extensive quantitative and qualitative analysis to assess executive compensation against company performance. Their identification of “pay misalignment” (and corresponding “no vote” recommendations) is now a part of the executive compensation landscape. The SEC acknowledged this in its adopting release, and also acknowledged that proxy statements already disclose information for the public to assess executive compensation against performance. Nevertheless, the SEC offered the following reasons for why it considers the new rule to add value:

Below we describe the basics of the new requirements and we offer practical considerations. (Our Corporate Defense and Disputes colleagues provide their perspective on the new rule here.)

Who. The new requirements apply to all companies that are registered under Section 12 of the Securities Exchange Act of 1934 (the “Exchange Act”) and subject to the federal proxy rules (i.e., most US-listed public companies), but do not apply to (i) foreign private issuers, (ii) companies with reporting obligations only under Section 15(d) of the Exchange Act, or (iii) emerging growth companies. Business Development Companies (“BDCs”) and Smaller Reporting Companies (“SRCs”) are subject to the new rule, but the requirements are less onerous for SRCs. The requirements apply only when the registrant files an annual proxy or information statement for which executive compensation disclosure is required (generally, the proxy or information statement filed for the annual shareholder meeting).

What. A new table, plus a tabular list of three to seven performance measures and a related narrative.

The final rule requires a new table in a registrant’s proxy statement (or other information statement) for annual shareholder meetings that shows named executive officers’ (“NEOs’”) total compensation (as reported in the summary compensation table) and “compensation actually paid” next to the following financial performance metrics:

The registrant must show the compensation information for its principal executive officer(s) (“PEO(s)”) and an average for its other NEOs. If there is more than one PEO during any fiscal year covered by the table, the information must be provided separately for each one. Numbers must be provided for each of the last five completed fiscal years, subject to the following exceptions:

A sample table from the regulation is shown at the end of this post. The rule requires use of Inline eXtensible Business Reporting Language (Inline XBRL) to tag data in the disclosure.

Description of relationship between “compensation actually paid” and metrics. Covered registrants must also provide a clear description of the relationship between compensation actually paid and each financial metric that is included in the table (i.e., TSR, peer group TSR, net income, and the company-selected measure, if applicable). This description may be graphic or narrative (or a combination of the two), and must include a comparison of the registrant’s TSR to the peer group’s TSR. (Again, SRCs are not required to show peer group TSR or a company-selected measure.)

Fair value is determined using the same GAAP methodology as for other financial reporting (FASB ASC Topic 718). Compensation actually paid does not include dividends or changes in value that occur after the vesting date.

In its release, the SEC acknowledged that equity award fair value involves some subjective assumptions leading to an estimate of compensation, but the SEC nevertheless concluded that it is a “reasonable measure” of an NEO’s actual pay and would present a fair picture of compensation actually paid.

Relaxed Requirements for SRCs. As noted above, the disclosure requirements are relaxed for SRCs in the following ways:

Where. Registrants have flexibility to choose where in the proxy statement (or other information statement) to include the information. For most registrants, it will be desirable to keep the disclosure separate from the CD&A—particularly in the first year of the disclosure—to avoid suggesting that the tabular disclosures drove compensation decisions (except in the rare case where the tabular disclosures happen to align with the CD&A’s narrative).

The new disclosure requirements will require collection of information and new calculations that are outside the scope of “routine” proxy cycles of prior years. It is important to address the disclosure earlier in the 2023 proxy process, and to gain perspectives from compensation consultants, accountants, and counsel. Registrants should be sensitive to nuances in the SEC rule that could create distortions or comparisons that can easily be taken out of context—for example, by the media or other non-investor stakeholders—to reflect poorly on the registrant.

Below we offer some considerations to assist registrants in incorporating the new pay-versus-performance requirements:

Similarly, where a number for compensation actually paid is based on “fair value” of equity, which in turn depends on certain assumptions (such as interest rates, mortality and share price volatility), it might help to explain the assumptions and how any deviation from the assumptions could affect the actual value the executive realizes.

Each registrant will have to review its own situation, but we think it will be important to think past the new table list, to how the new disclosure integrates with the rest of the compensation discussion. 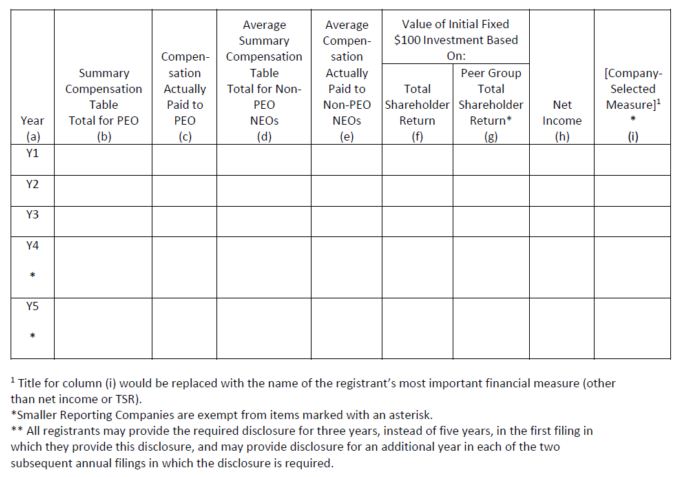 The final rule does not prescribe a format for the tabular list of three to seven performance metrics.