The regulations implementing the Foreign Investment Risk Review Modernization Act of 2018 (FIRRMA), which significantly expanded the jurisdiction and authorities of the Committee on Foreign Investment in the United States (CFIUS), became effective on February 13, 2020. As we previously reported, FIRRMA also authorized CFIUS filing fees for the first time. On March 4, 2020, the Department of the Treasury, which chairs CFIUS, issued a proposed rule to establish such filing fees, which is described below.1 The White & Case CFIUS FIRRMA Tool will be updated to provide users with guidance in determining fees when the rule goes into effect.

Additionally, on March 6, 2020, President Trump issued an order requiring Beijing Shiji Information Technology Co., Ltd., a Chinese company, to divest all of its interests in StayNTouch, Inc., a US developer of cloud-based hotel management software tools. This marks the sixth presidential block in the history of CFIUS—the third for President Trump alone—and is another example of CFIUS’s increased aggressiveness in pursuing transactions involving the combination of Chinese acquirers and US businesses with access to potentially sensitive data.

FIRRMA authorized CFIUS to impose filing fees not to exceed the lesser of one percent of the value of the transaction or $300,000 (adjusted for inflation). Under the proposed rule, a filing fee, calculated pursuant to a set schedule, would apply to any voluntary notice filed under CFIUS’s investment regulations or its real estate regulations. This includes situations in which a notice is filed with respect to a transaction following CFIUS’s review of a declaration pertaining to the same transaction (for example, cases in which CFIUS responds to a declaration by requesting a notice be submitted). Filing fees would not be required, however, for declarations or agency notices (i.e., notices unilaterally initiated by a CFIUS member). Under the proposed rule, an additional filing fee is not required in cases where parties withdraw and resubmit their notice (which is typically done to allow more time for the CFIUS process, including to negotiate mitigation measures), unless the CFIUS Staff Chairperson determines that there has been a material change to the transaction or the parties made a material inaccuracy or omission. The Treasury Department states that “it believes [the proposed fee structure] will not discourage filings and will allow parties to continue the practice of determining whether to file a voluntary written notice based on an evaluation of the facts and circumstances of the transaction.”

The proposed fee structure is the same for both investment and real estate filings and is based on the value of the notified transaction, as follows: 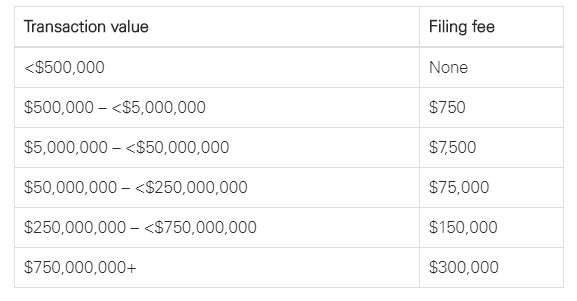 The transaction value is the total value of all consideration that has been or will be provided in the context of the transaction by or on behalf of the foreign person that is a party to the transaction, including cash, assets, shares or other ownership interests, debt forgiveness, or services or other in-kind consideration.For purposes of determining the appropriate fee, the proposed rule provides that a transaction’s value would be calculated as follows:

Interested parties may submit comments regarding the proposed rule to the Treasury Department electronically through the federal government eRulemaking portal at https://www.regulations.gov, or via mail. Comments must be submitted by April 8, 2020.

On March 6, 2020, President Trump ordered Beijing Shiji Information Technology Co., Ltd. (Shiji), a Chinese publicly traded company, to divest all of its interest in StayNTouch, Inc. (StayNTouch), including StayNTouch’s assets (including customer data) and operations. This marks the sixth-ever presidential block of a transaction and the third for President Trump. Note that where CFIUS intends to recommend a presidential block, parties more typically voluntarily agree to abandon the transaction or, if post-closing, to divestment.

StayNTouch provides a Software-as-a-Service hotel property management system for hotels and their guests. Shiji provides software solutions and services for the hospitality, food service, retail, and entertainment industries. In the order, President Trump stated that there is credible evidence that leads him to believe that through acquiring the interest in StayNTouch, Shiji might take action that threatens to impair the national security of the United States. Although the order does not specify the national security risk presented by the transaction, it appears to pertain to hotel guest data managed and stored by StayNTouch. The order further states that until the divestment is completed, Shiji “shall refrain from accessing, and shall ensure that any of its subsidiaries or affiliates refrain from accessing, hotel guest data through StayNTouch.” Sensitivities regarding data have been a growing CFIUS concern in recent years and were a particular focus of FIRRMA, which authorized expanded authorities for CFIUS with respect to certain transactions involving US businesses that maintain or collect sensitive personal data of US citizens.

Shiji acquired StayNTouch in September 2018, and had previously invested in StayNTouch’s Series A financing in 2016. Given the time period between the 2018 closing and the presidential order, it is possible that CFIUS requested a post-closing filing as part of its “non-notified” authorities, which CFIUS has been ramping up under FIRRMA. Accordingly, it is more critical than ever that parties carefully assess potential CFIUS-related risks of a transaction at the outset of a deal to most effectively manage such risks and avoid potentially significant impediments.