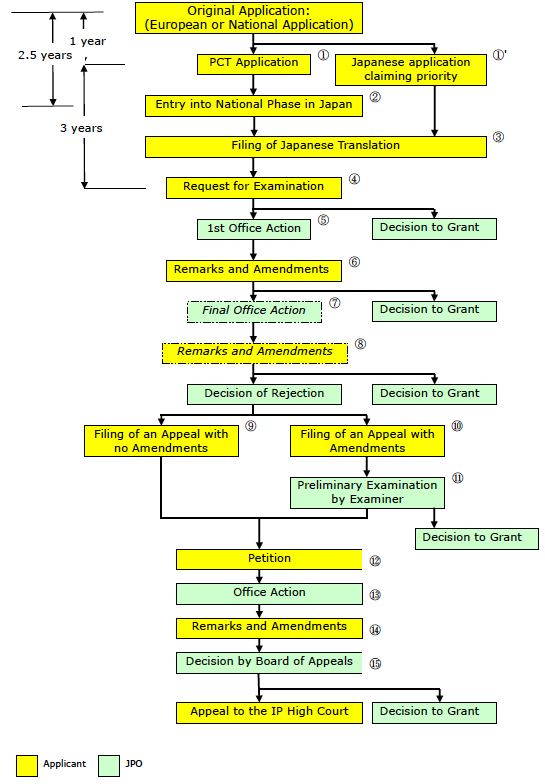 ① The PCT application filed in its original language is the basis of the examination. Mistakes in the translation may be rectified by Amendments (during the patent prosecution procedure) or Corrections (after grant of a patent) under the same conditions as described in ①' in connection with the Paris route applications filed in the English language.

① ' Paris route applications may be filed either in Japanese or any other language. When a Paris route application is filed in English or any other language, a Japanese translation must be filed within 16 months from the priority date ③, and mistakes in the translation may be rectified by Amendments (during the patent prosecution procedure) or Corrections (after grant of a patent).

④ Examination must be requested within 3 years from the filing date in Japan (International Filing Date for a PCT application). Several measures are available to accelerate examination (e.g., PCT-PPH (Patent Prosecution Highway), PPH (Patent Prosecution Highway)) when (1) a decision to grant a patent is issued by one of the participating offices, (2) an Accelerated Examination when the relevance of the claimed invention as they relate to the search results is explained, and (3) a Super Accelerated Examination when the claimed invention will soon be exploited, etc.

⑥ The applicant is relatively free to amend the claims. New matter must not be introduced and shifting or changing the claimed subject matter is not allowed in amendments. “No shifting” means that the amended claims must have unity of invention with the claim(s) which was/were found to be patentable in the first Office Action, or, if all of the claims were rejected in the first Office Action, the amended claims must have all the limitations recited in the narrowest examined claim.

⑧ Claim amendments made in response to a Final Office Action are restricted in that only narrowing the claims, by further limiting the already recited features (internal limitation), is allowed. The addition of (a) new feature(s) is not allowed even though if it/they narrow(s) the claim scope.

⑫ The Preliminary Examination Report is placed in the file wrapper and is publically viewable. The applicant may therefore see the Preliminary Examination Report and submit comments in a Petition, which may be the only opportunity to submit comments. Although the JPO may issue Interrogatories at its discretion, that is not a routine procedure as it was before.

⑬ At this stage, an Office Action is issued to provide the applicant with an opportunity to officially submit amendments only when the Board of Appeals agrees with the patentability of the proposed claims.

⑭ In response to an Office Action at this stage, the applicant is supposed to submit the amendments the examiner has already agreed to.

⑮ A Decision of Rejection of Application may be appealed to the IP High Court.