AIA Supplemental Examination Nuts and Bolts: Get it in your toolbox and don’t leave home without it!

Effective September 16, 2012, the America Invents Act allows a patent owner to request Supplemental Examination of a patent by the U.S. Patent and Trademark Office (“USPTO”). Supplemental Examination gives patent owners a proactive tool to have the USPTO consider, reconsider, or correct information that the patent owner believes is relevant to the patent. 35 U.S.C. § 257(a). Such information may include issues raised in inequitable conduct or unclean hands challenges against the patent during litigation.

Only a patent owner may request Supplemental Examination. 37 CFR § 1.601(a). The request may be filed at any time after patent issuance during the period of enforceability of the patent. 37 CFR § 1.601(c). After receiving a request for supplemental examination, the Director of the USPTO (“Director”) will conduct and conclude supplemental examination within three months by issuing a certificate indicating whether the information presented in the request raises a substantial new question of patentability (SNQ). 35 U.S.C. § 257(a). If there is an SNQ, the patent proceeds to ex parte reexamination. If there is no SNQ, the patent remains as is, but the patent owner reaps the defensive benefits of having patentability confirmed and estopping any future unenforceability challenges based on the submitted information.

Although in effect for almost 7 years, Supplemental Examination is rarely used by patent owners. According to Finnegan’s research, based on the USPTO’s Public Patent Application Information Retrieval (“PAIR”) system, only 246 supplemental examinations have been filed as of May 15, 2019, which averages to about 30 filed per year. Of the 246 requests filed for supplemental examinations, only 6 were filed so far in 2019.

What Materials Are Submitted with Supplemental Examination Requests?

Each request is limited to no more than twelve items of information, but multiple requests for Supplemental Examination of the same patent at any time may be submitted. 37 C.F.R. § 1.605(a). This means the patent owner can submit several requests of up to 12 items each if he or she would like to have more than 12 items considered by the USPTO.

Since inception, the types of items of information submitted for Supplemental Examination have not been limited to just patents and patent applications. Instead, approximately 1/3 of the requests include printed publications, declarations, and webpages. Those materials also included descriptions of physical items, descriptions of sales/public uses (not in a declaration), and citations to case law and the MPEP discussing Alice and subject matter eligibility. The remaining 2/3 of requests include U.S. and foreign patents or patent applications. Such requests appear to be filed to ensure that the USPTO considers patents and patent applications that were cited in foreign counterpart prosecution or during prosecution of related U.S. patents/patent applications. This “patents/applications” category of information, as shown below in the diagram, also included related search reports and prosecution history documents.

Fig. 3: What Kinds of Materials Are Submitted with Supplemental Examination Requests?

Finnegan research on PAIR, as of May 15, 2019, 246 SE requests filed. May be more than one type of material submitted per request. “Patents/applications” includes related search reports and prosecution history documents. Other materials include MPEP, case law discussing Alice and subject matter eligibility, physical items, and descriptions of on sale/public use not in a declaration.

According to Finnegan’s research on PAIR, a SNQ was not found for 69 (28%) of the 246 Supplemental Examinations. Excluding one pending and one terminated case, this shows that a SNQ was found in the vast majority of cases (175 (72%)). 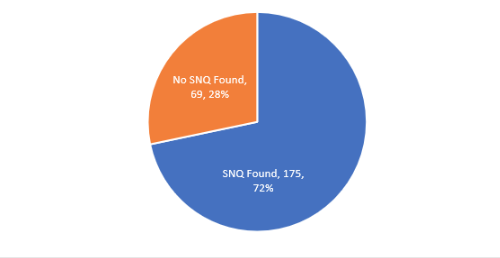 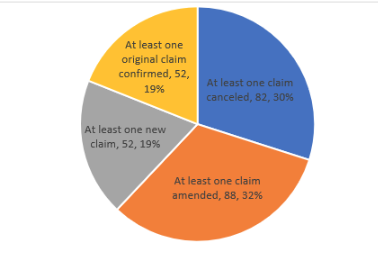 In summary, the records show that Supplemental Examination can be beneficial to patent owners. The proceeding must be completed within three months from filing the request, making it an extremely speedy process. If no SNQ is raised by any of the items of information in the request, a Supplemental Examination certificate is published, and the patent remains as granted with all of the defensive benefits that are derived from having gone through Supplemental Examination. The short time period for determining whether there is a SNQ may benefit a patent owner who may foresee patent litigation on the horizon. Furthermore, patent owners can submit a wide variety of documents for consideration and are not limited to patents and printed publications, as in other post-grant proceedings. And since the standard for submission is a relatively low bar of relevance, no great amount of time must be spent determining materiality of the items of information. Supplemental examination’s ability to cover a wide range of documents and related issues in a short amount of time may benefit patent owners and their patents. Given these benefits, we would not be surprised if use of Supplemental Examination by patent owners increases with time.